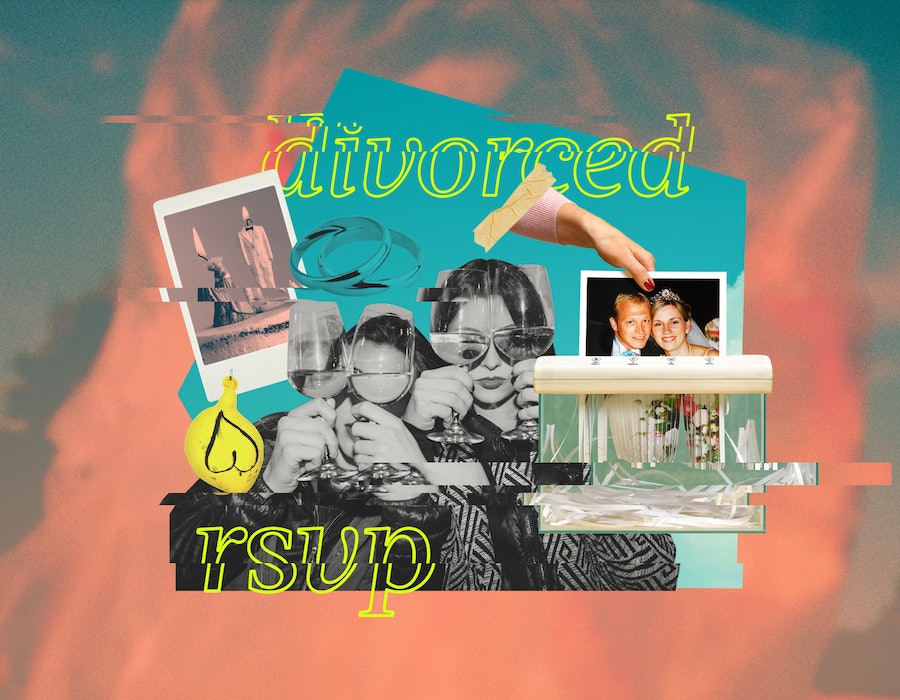 “Divorces are made in heaven,” according to Oscar Wilde, although he himself never obtained one. Indeed, divorce was quite rare in his world, and for women, often came with ruinous consequences. Still, he thought divorces were divine. In this, like most things, Wilde was about 127 years ahead of his time. He was simply an early adopter of the concept of the glamorous divorce — the kind after which you wallow around in a house that looks like Diane Keaton’s in Something’s Gotta Give, wearing expensive-looking wide-leg pants, all the while boning Keanu Reeves.

I myself have admittedly bought into this idea. In my memoir, Well, This is Exhausting, I rather flippantly said, “I thought I’d be married by now, not because I’m romantic, but because I thought I’d be divorced by now,” which was meant to be a joke but also points to the fact that I’m not taking divorce particularly seriously. Both of my parents have been married four times, which means they’ve each been divorced three times, for all the non-math-nerds out there. Of my aunts and uncles, four out of six have been divorced at least once, some more.

My sister and I had somewhat opposite reactions to our parents getting married and divorced and remarried so many times; she’s said for years that when she gets married, she only wants to do it once and that she wants to “take divorce off the table,” while I’ve maintained that there is no way to do so. Everyone knows that divorce exists — you can’t just tell your partner, “Not for us it doesn’t!” and make it disappear, as much as you might want to.

On top of that, I’ve always liked the idea of divorce. I like that there’s a way out of forever. I like that marriages can be undone. I like it for obvious reasons, i.e. horrible marriages filled with abuse or abandonment or cheating, but also for just-OK marriages filled with boredom or dissatisfaction or general malaise. I’m not convinced that staying in a relationship because you said you would eight years ago is an accomplishment. In my opinion, someone’s vaguely unhappy 50 years are not, by default, more sacred than your steamy weekend in Rotterdam.

As a child, I never understood why my mother was so embarrassed to have been married four times. She sees those marriages as “failures,” which I do not, I suppose. Of course, she dealt with a lot more judgment than I had as someone who was only divorce-adjacent. On top of that, if I were to get married four times now, I think I’d face a more forgiving world than she did. Divorced mothers are no longer pariahs of the playground to the same extent they were 30 years ago.

In more conservative places, maybe dropping the “D” word still draws an eyebrow raise, but generally speaking, divorce stigma seems to be waning. Not only that, I actually think we’ve moved past the acceptance of divorce and actually begun to romanticize it, or at least minimize its impact. We were all looking forward to Adele’s new divorce album with excitement; people frequently tweet glib bon mots about “second husband energy,” and our idea of a divorcée no longer looks like a sad, ruined woman. Our image of divorce now seems to involve a whole lot of… fun.

Part of that, I think, is the active crusade people, especially women, have been on to fight the image of what a divorcée’s life must be like. Now, it’s not entirely uncommon for people to commemorate their divorce with a party, a lavish vacation, a cake, or a ceremonial burning of their wedding dress. Shanna Moakler famously threw a Las Vegas divorce party in 2006, Elizabeth Gilbert introduced us to Eat, Pray, Love-ing our way around the world the same year, and the next year a novel titled The Divorce Party came out. Christine Gallagher, a practiced divorce party planner, said she started in 2003.

Even though these celebrations may be dismissed as corny or tacky by some, by engaging in public rituals, divorcées have been clear that while they might be grieving, they are not sad or pathetic or to be ignored. Divorce parties make clear that something is being gained at the end of a marriage; they assert that divorce itself is, at least in some ways, a positive. Gwyneth Paltrow even did a famous, albeit overblown rebrand for divorce, dubbing it “conscious uncoupling.”

There seems to be, too, although it’s nearly impossible to provide evidence of this, a sense that with the anemic pop-feminism of the early 2000s came a “you go, girl” attitude toward the dissolution of any hetero relationship, including marriage. As of 2015, 69% of divorces are initiated by women (and that statistic jumps to 90% when you look at college-educated women). Slowly but steadily, divorce has been rebranded as emancipation from a raw deal, rather than the dereliction of duty to family and home that it was in the ’50s and ’60s.

Also, there’s no debating the influence of celebrity and media on divorce. Celebrities do seem to have higher divorce rates than the rest of us normies — maybe because they’re apart so often, or because of the pressures that come with fame and money, or because of the temptation of meeting someone like Angelina Jolie IRL and having her like you back. Often, those same celebrities go on to make art about their divorces that we then consume (see: Marriage Story, Star-Crossed, and of course, Rumours). We sickeningly watch for post-divorce bodies (Adele’s, famously), post-divorce hookups (Pete Davidson, we’re all looking at you), post-divorce outfits (the Revenge Dress), and now even post-divorce playlists, apparently (Anna Marie Tendler’s Spotify bangs, it turns out). While we connect on some level with their grief, as consumers, we’re a bit removed from it. It’s like something that happens in the movie of our lives — the rich and famous fall in love, get married, then divorced, eventually emerging hotter, better, wiser in a series of carefully coordinated PR moments, lending the whole ordeal an air of glamor, of chicness.

But divorce is rather inaccessible for many people. For about 15% of separated couples, divorce is simply not financially feasible, forcing them to stay married. The average cost of divorce in the United States as of 2019 is $12,900, according to the legal website Nolo, and even uncontested divorces cost about $4,100. If children are involved, the financial burden ratchets up dramatically; in California, for example, a childless divorce averages $17,500, while having children pushes that number to $26,300 — a massive expense for the typical non-celebrity person. Divorce can be, and often is, financially devastating for people. This seems to be especially true for women, who historically have lost much more than men financially when it comes to divorce.

The truth is — although I’m still very much in favor of divorce being on the table for everyone who wants one — that divorce sucks. I don’t know anyone personally who would describe their legal split as easy, breezy, or beautiful, and even celebrities aren’t exempt from messy splits. Despite changing attitudes toward divorce, about half of divorcées say they feel stigma or shame, according to a study done by UK law firm Slater & Gordon. In that same study, researchers found that it took divorced people four years on average to feel like they were emotionally “back on track.” Studies over the years have been a bit mixed, but the most recent and encompassing data from the Institute for the Study of Labor seems to suggest that “divorce is traumatic in the short run,” but that both men and women seem to recover at about equal rates emotionally. It’s not that divorce isn’t worth it — one study of 2,000 people by the legal resources website AVVO showed that 68% of people and 73% of women did not regret getting divorced — but that divorce takes a very real emotional toll; it’s unsurprisingly been linked to depression, anxiety, and increased alcohol abuse. Ending a marriage is no small thing — and it’s certainly not glitzy or glamorous.

I’ve been guilty of thinking that childless divorce is “no big deal,” or at least, no more of a big deal than a bad breakup, which just isn’t the case emotionally, socially, or financially. I’ve also imagined the life of the divorcée as one of freedom, elegance, hidden depths, and untold affairs. I’ve ignored, intentionally and unintentionally, the potential costs, the possible loneliness, and the lingering stigma that comes with ending a marriage. I’ve imagined my hypothetical future self as I wrongly imagine celebrities: impervious to serious pain, immediately ready for a new and exciting lover, and always with a spare $17K in my bank account.

More like this
How To Let Go Of Someone You Love, According To Experts
By Madeline Howard
How To Know If You’re A Hopeless Romantic Or A Hopeful Romantic
By Jessica Estrada
The Juiciest “Would You Rather” Questions For Couples
By Alice Broster and Rachel Mantock
Should I Break Off My 4-Year Relationship For A Woman I Just Met?
By Sophia Benoit
Get Even More From Bustle — Sign Up For The Newsletter