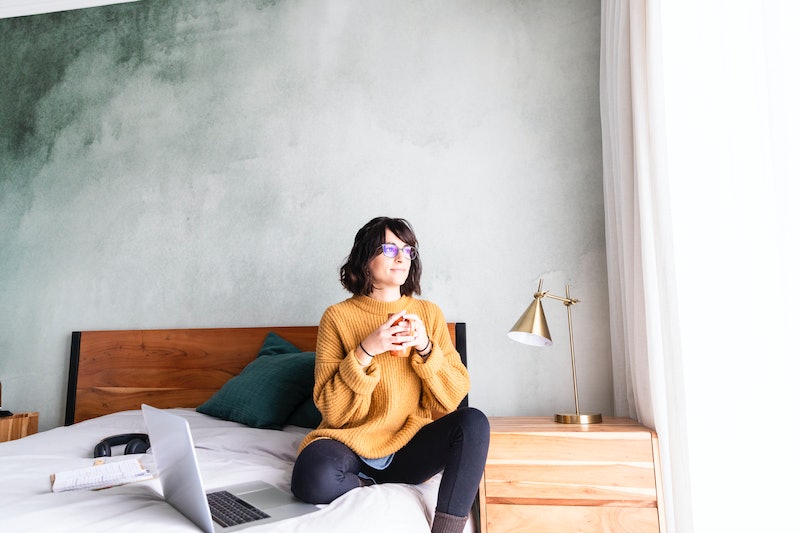 During cold and flu season, there's a lot to deal with: remembering to get your flu shot, making sure you clean your hands and cover your mouth when you sneeze — the list goes on. Which means that thinking about your menstrual cycle might fall by the wayside. But the flu can affect your period in ways you might not expect. It might seem odd that an illness that doesn't seem to have anything to do with reproduction can throw a period out of whack — but menstrual cycles are affected by many different factors, and viral infections are one of them.

"Illnesses can sometimes pause ovulation and delay your period," Dr. Jessica Shepherd M.D., an OB-GYN and U by Kotex partner, tells Bustle. "It's a normal side effect of the flu." Menstrual cycles can be thrown off by the flu because of the illness's severe impact on the body's immune system and resources.

The reason why involves the menstrual cycle's key purpose: getting the body ready for potential pregnancy, and then flushing out the reproductive system when a fertilized egg isn't implanted. When your body's dealing with a virus, it's less likely to menstruate, Dr. Naglaa Rizk M.D., assistant professor of obstetrics, gynecology and women's health and Rutgers University, tells Bustle. "Stress from the flu can lead to changes in your periods or even amenorrhea," she says. The body no longer believes you're healthy enough to carry a pregnancy, so it delays your cycle until you are.

It's also worth noting that during your menstrual cycle, temperature tracking can also be thrown off by flus. Fevers and high temperatures can interfere with your basal body temperature, which is used by fertility apps to measure ovulation. If you get sick during your period and are used to tracking fertility using a temperature app, it's important to remember that it may not be accurate while you're experiencing flu symptoms.

"If the flu is causing you to sweat more fluids, you’ll likely become more dehydrated, as your period simultaneously lowers estrogen levels and prevents your body from retaining water," Dr. Shepherd says. You're already at higher risk of dehydration when you menstruate because your estrogen levels plateau, causing your body to retain less water. So if you have your period during a bout of flu, it's absolutely crucial to keep your fluid levels up, as you're more vulnerable to dehydration. (Also, I'm so sorry.) Dehydration can make period cramps worse, too, so flu can coincide with a lot more abdominal aching during your period, too. "Hydration is imperative during viral illnesses to ensure appropriate estrogen levels," Dr. Shepherd says. "Make sure to drink lots of water."

Dealing with the flu can also mess up your sleep and your eating, Dr. Shepherd says. "Lack of nutrients or sleep can affect your period flow and delay or prolong your period, so be mindful about eating well and getting enough sleep." She says that sleep disruption can affect the luteal phase, which is the part of the menstrual cycle just before your period. If you're tossing and turning with a fever, your period might show up late or early as a result.

While these are potential ways having the flu can mess with your period, this is different from "period flu," a collection of flu-like symptoms, including nausea and achiness, that can occur in response to the hormonal shifts just before a period. Period flu is caused by declines in estrogen before menstruation, and while it's not pleasant, it's not actually true influenza.

If you want to avoid having the flu impact your period, the solution is simple: get your flu shot. While the shot might not protect against all strains of the virus going around this year, research has shown that if you get the flu after getting the shot, the illness is likely to be far less severe. Getting your flu shot is important for other reasons, such as contributing to herd immunity and protecting people who aren't able to get their shots themselves.

If you miss your period because you're down with flu, it's likely not a signal that something is irreparably wrong; your body is just postponing things till you get better. If it keeps happening after you've recovered, you might need to chat to your OB-GYN. "Consistently late or irregular periods might signal a larger issue that should be discussed with your doctor," Dr. Shepherd says. She suggests using a period tracker if you've been ill, to see how it might have affected your cycle. Otherwise, rest up, drink lots of fluids, and hang in there; the flu normally runs its course in about a week or two.

More like this
All The Benefits You Get From Sitting In A Sauna
By Carolyn Steber
The 9 Best Exercises For Piriformis Syndrome Relief
By Carolyn Steber
I Tried The Ice Barrel's Cold Therapy Tool & Now I Like Ice Baths
By Allie Flinn
Got Brain Fog? Here Are The Best Supplements For Memory & Cognition
By Carolyn Steber
Get Even More From Bustle — Sign Up For The Newsletter

This article was originally published on November 10, 2018