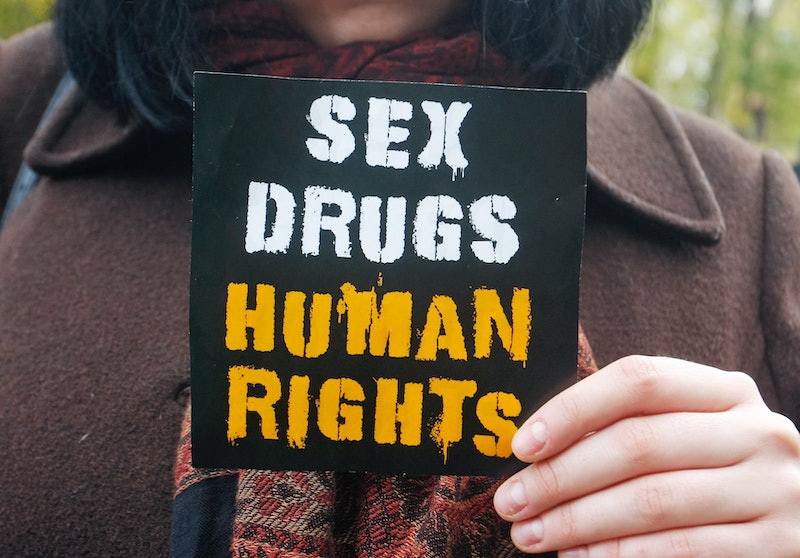 So much is still up in the air with the 2020 election, but one clear winner emerging from the process? Drugs. Several states are poised to legalize recreational weed, D.C. voters moved to decriminalize psychedelic 'shrooms, and Oregon is decriminalizing possession of small amounts of drugs like cocaine and heroin. These changes are the work of organizers and policymakers who've seen how criminalizing drugs makes people less likely to seek help for substance abuse or overdose, in addition to how Black and brown communities are disproportionately affected by the "war on drugs." And despite what else might happen elsewhere when all votes are tallied, the 2020 election's drug decriminalizations are a big deal for public health.

Before the 2020 election, there were 11 states with legal recreational pot use. Four states are set to join them now.

Mississippi isn't quite there yet with recreational pot, but voters approved Initiative 65, which will allow medical marijuana for the treatment of conditions like PTSD and opioid management. On Tuesday, the state of Oregon, where pot was already legal, voted to pass Measure 110, which decriminalizes drug possession and emphasizes treatment over punishment. A $100 fine, not incarceration, will now be the rule in Oregon when people are in possession of small amounts of heroin, cocaine, or methamphetamine. Oregon voters also approved Measure 109, making it the first state in the country to legalize psychedelic mushrooms. In D.C., voters passed Initiative Measure 81, which will in theory put 'shrooms on the lowest list of D.C. police priorities.

Governments don't decriminalize drugs to make it easier to party — there's a lot of research showing how it helps people live healthier lives.

For individuals, these policies are a boon. Medical cannabis can also help a lot of people with pain reduction when they're living with HIV-related pain, seizure disorders, chronic pain, or are going through chemotherapy, says Dr. Natasha Bhuyan, M.D., a provider at One Medical. Psychedelics can be helpful for folks experiencing depression, OCD, anorexia, or trauma, psychiatrist Rajan Grewal, D.O., previously told Bustle.

But it also makes a difference on a macro level. In 2001, Portugal decriminalized drug possession, and no longer arrests folks for small amounts of everything from cocaine and heroin to pot, ecstasy, or meth. Instead, people found in possession of drugs receive citations and are often referred to treatment. As a result, VICE reports that rates of HIV infection have plummeted, and drug overdose deaths have become a rarity in Portugal. While 30 people died of drug overdoses in Portugal in 2016, nearly 50,000 people died in the U.S. in 2018 just from opioid overdoses.

Seeing someone with drugs and thinking "you might need treatment" is a whole lot better for people's health than "you might need prison time." Portugal is international evidence to support that bit of common sense, and Oregon is poised to be the first state to prove that harm reduction strategies like these work within the U.S.

"Harm reduction is a public health strategy that aims to minimize the social and physical consequences associated with drug use," Dr. Bhuyan tells Bustle. "Harm reduction strategies are already being used today, such as needle exchange programs. This treats people with substance abuse disorder or addiction as a medical issue rather than a criminal issue. Rather than focusing on criminal penalties, medical support could decrease the risk of relapse."

Decriminalization Is Also A Step Forward For Racial Justice

The COVID-19 pandemic has highlighted the many ways racial justice and public health are connected — structural racism in zoning laws, health care, and policing all create extreme health risks for Black folks and other people of color in the United States. On top of all that, BIPOC are targeted for drug arrests and convictions at much higher rates than their white peers. According to the Drug Policy Alliance, a non-profit that advocates for harm reduction in drug policies, white people use drugs at pretty much the same rate as BIPOC — yet nearly 80% of people in federal prisons for drug offenses are Black or Latinx.

In addition to the mental health impacts of incarceration in and of itself, criminalizing drugs contributes hugely to racial health inequities that prioritize treatment for white people in need, and incarceration for BIPOC. On the flip side, decriminalizing drug use to varying degrees can help keep BIPOC out of prison and get people access to the treatment they might need.

So yeah, 2020 has finally done something kinda good.

Correction: A previous version of this story misidentified Dr. Bhuyan. It has been updated to include the correct information.

Readers should note that laws governing cannabis, hemp and CBD are evolving, as is information about the efficacy and safety of those substances. As such, the information contained in this post should not be construed as legal or medical advice. Always consult your physician prior to trying any substance or supplement.

More like this
Bonnie Milligan's Wellness Routine, From Daily Journaling To Drugstore Teas
By Jessica Derschowitz
10 Primal Movement Exercises That'll Improve Your Mobility
By Carolyn Steber
How Many Burpees Should You Do Per Day? Here’s What Fitness Trainers Say
By Carolyn Steber
The 11 Benefits Of Aerial Yoga, According To Trainers
By Carolyn Steber
Get Even More From Bustle — Sign Up For The Newsletter
From hair trends to relationship advice, our daily newsletter has everything you need to sound like a person who’s on TikTok, even if you aren’t.