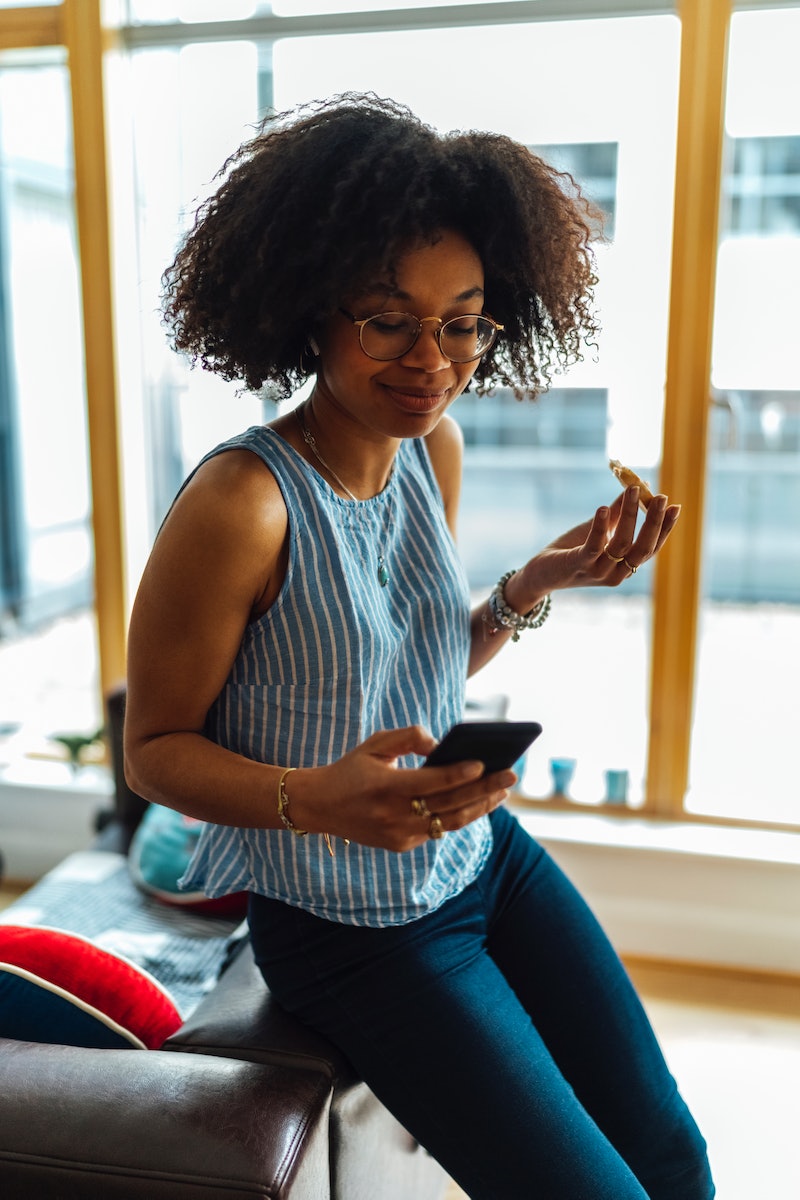 We've all accidentally liked our ex's photo from six years ago — or widened our eyes on the other end of that exchange. In honor of the app's 10 year anniversary, it feels right to commemorate the most embarrassing Instagram mistakes people have lived through. While the app might keep people connected and entertained, it's also taught people crucial life lessons, like how to be light on your thumbs and how to use the app like an FBI agent. It only takes one double tap on a photo you didn't want anyone to know you were looking at to change the way you use your thumbs forever.

Over the years, you've honed your ability to be stealth and develop an unspoken etiquette. Don't let a Boomer look at an Instagram photo on your phone, because they will try to enlarge it, and they will accidentally like it. Don't look at an ex's photos after a cup of coffee or in transit, because a shaky finger could incriminate you and your snoop game. And always be careful about replying to a Story, particularly if you're saying something petty in the DMs.

And yet, we're all guilty of embarrassing ourselves on Instagram at some point in the last decade. Here are nine real-life Instagram stories from the last 10 years of the platform.

"I used to obsess over my bio and change it constantly. I put way too much energy into defining myself and my career in one line." says Marissa, 32. "One day, after updating it for the 10th time, someone DMed me and said 'how long will this bio last?' and I died. I never realized people would notice, [and] now I refuse to touch it even though it feels outdated. What's worse, Gen Z is really good about making cheeky irreverent bios, like 'frozen yogurt fan account,' and it makes me feel so uncool for taking my bio so seriously."

"A friend of mine shared an Insta Story with me via DM, but the account was private so I couldn't see what it was. Assuming it was a meme account and something funny and worth viewing, I requested to follow the account so I could see it," Jamie, 29, tells Bustle. Had she looked at the account more closely, she might have realized that it was a personal account, and not one she would have liked to follow. "It was my ex-boyfriend's new girlfriend's account. My friend, who knows her, was trying to show me a Story that the new girlfriend posted of the two of them," she says. The request to follow "turned into a whole thing" between her, the ex, and the ex's new girlfriend. Jamie was not only embarrassed for herself, but also felt bad that the new girlfriend thought she was meddling.

Molly, 31, wanted to send her husband a sexy picture of herself in a new see-through bra. She was on the plane and using WiFi, and because her husband had an Android phone, she decided to send it through Instagram DM rather than Messages. "Somehow, I selected my husband's name, and before pressing send, managed to add a senior co-worker, turning it into a group chat," she says. "My co-worker saw it before my husband did and wrote to our awkward chat, 'I don't think this is meant for me,' and my heart stopped — we all just pretended it didn't happen."

If you DM someone who doesn't follow you, there's a chance they won't see the message: It could go into their "other" inbox and go undetected for eternity — especially if this person isn't an avid IG user. For Lizzi, 29, the "other" box is purgatory. "Over a year ago, I sent my ex-boyfriend a DM letting him know that I'm now living in the same city as him, and that I think about him all the time, am single and would love to meet up for a drink." Lizzi says it took a lot of guts and deliberation to send the message, and once she did, she checked her phone constantly, waiting for a response, but it never got read. "I ran into him recently and didn't have the nerve to tell him that I had sent him a message, so I just acted like I never did. One day he will check that inbox and be so confused," she says.

"I called out of work because I wanted to go to my friend's birthday party. I lied and said I was really sick," Cole, 33, tells Bustle. "My boss follows me on Instagram so I was really careful about not posting anything and asking people not to tag me in anything, but my boss also follows my co-worker, who accidentally shared a video that had me in the background," he says. Cole had no idea this video existed, so when he showed up to work for the next shift, he was surprised to be confronted by his boss, who said, "I'm glad you were feeling well enough to be dancing at 3 a.m."

If you send a friend someone's Instagram Story, particularly to say something shady or negative about the post or the poster, you should know that if you reply before the Story is finished playing, the message will go to the original poster, not the friend who shared it. Julia, 28, learned this lesson the hard way. "My friend sent me the Story of a mutual friend of ours — it was a sweet tribute she had made for her boyfriend for one of those #nationalboyfriendday prompts — and I wrote back immediately, thinking I was replying to my friend, saying 'Ugh vomit I can't stand them.' Of course the mutual friend got the message, and just sent a frown face back," Julia says. "I still feel terrible," she adds.

While Instagram can be a great place to spread awareness and information about social movements, it can also invite performative activism. "I woke up on June 2 and my whole feed was black squares with the hashtag #BlackOutTuesday and #BlackLivesMatter," Brittany, 30, tells Bustle. Like millions of other people, Brittany panicked, fearing that by not joining the movement, it might look like she didn't support the cause, so she posted a black square with the same hashtags. "As the day went on, and I learned more about the movement, I realized I didn't really agree with it, and felt that pausing my activist efforts for the day was the opposite of what I believed to be helpful." By the afternoon, Brittany had deleted the black square and gone back to posting infographics, donation links, and other resources that more actively supported the Black Lives Matter movement.

Right after Instagram Live came out, Rachel, 27, made a mental note to be more careful about locking her phone. "I remember noticing that I was accidentally selecting Live a lot when my phone was unlocked on my pocket, and I remember thinking ... going Live accidentally would be embarrassing." Around midnight on the way home from a night out with a friend, Rachel's prophecy came true. Over the course of a 20 block walk, Rachel and her friend complained about their parter's terrible hygiene and compared notes for between the sheets — "really, the most private things two friends could talk about." After about 10 minutes of gabbing, Rachel felt her phone vibrate. "A friend of mine had to call me to tell me that I was Live Streaming my conversation and there were over 30 people at one point tuning in," she says.

Home visiting her parents, Alex, 33, gave her phone to her mom to show her a picture her ex-boyfriend had recently posted. "I said, Mom, whatever you do, don't double tap that photo, I do not want him to know I am checking up on him," Alex says. While her mother did not like the photo, she did manage to tap his Live story, panic, try to click out of it, and accidentally sent a rain shower of 100 emojis. "He texted me saying he was surprised to hear from me and I tried to explain that my mother had done that and he just absolutely did not believe me — I am still cringing."

More like this
Why We Love Investigating Friendship Breakups
By Carolyn Steber
Wait, Does Liking Someone's IG Story = Shooting Your Shot?
By Alexis Morillo
How To Turn Off TikTok Profile Views So You Can Stalk Other Accounts In Secret
By Alexis Morillo
The 3 Zodiac Signs With Main Character Energy, According To An Astrologer
By Kristine Fellizar
Get Even More From Bustle — Sign Up For The Newsletter
From hair trends to relationship advice, our daily newsletter has everything you need to sound like a person who’s on TikTok, even if you aren’t.