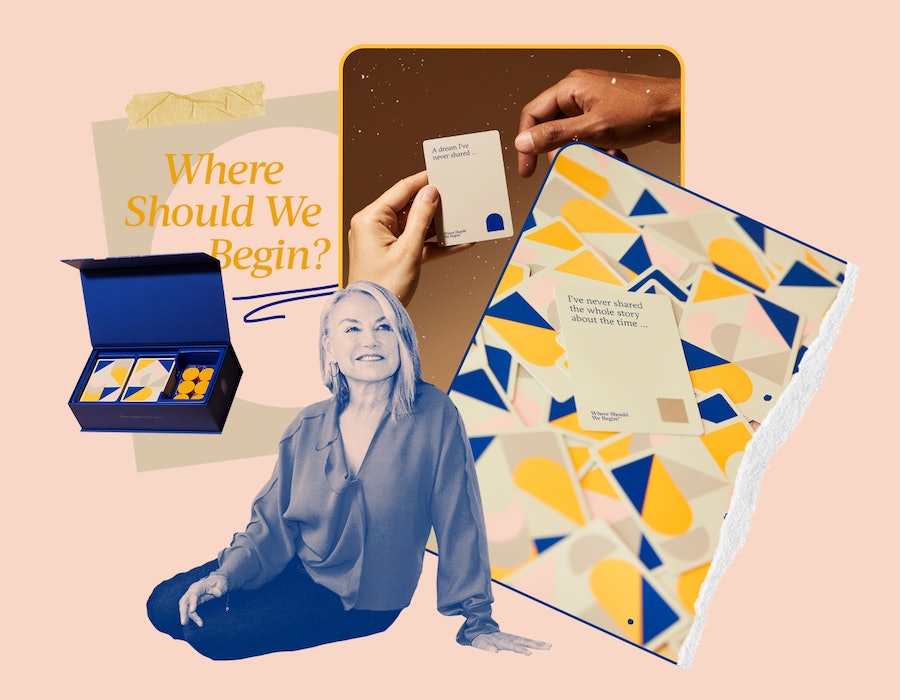 Esther Perel spends a lot of time listening to people talk. The best-selling author, couples therapist, and host of two podcasts — the relationships-focused Where Should We Begin?, now in its fifth season, and workplace-centric How’s Work? — has heard everything from stories about stressed, Zoom-fatigued colleagues to the woes of 24/7 childcare and the toll it takes on couples. Through it all, Perel identified a common denominator that many people have been missing in their daily lives, especially over the past year and a half.

“I just said, ‘We need to play,’” Perel tells Bustle. “I do a lot of role play in my work, but I’m not a card person. I know that my strength is in coming up with very good questions, and that a good question is an opening to a narrative universe.”

From there, Where Should We Begin? — the card game — was born. The premise will be familiar to anyone who’s played Apples to Apples or Cards Against Humanity: A storyteller reveals a mood-setting prompt card, like something “that gets you worked up,” and each player submits a story card from their hand — anything from “the first time I masturbated” to “a time someone broke my trust” — that they think pairs well with the prompt. The storyteller then chooses the combination that appeals to them most and shares accordingly.

True to Perel’s style, many story cards probe the most tender, oft-guarded sections of our hearts, like “The last time I felt lost…” and “When I notice myself getting older, I…” Others, though, are lighter: “A text message I fantasize about receiving” is one of Perel’s personal favorites. While she was still developing the game, she gave it to a couple, who played through the prompts. Days later, one partner sent the text the other person had described.

Here, Perel expands on the idea of play, monogamy in America, and how bored couples can find a new spark.

You have so many other projects going on all the time. What inspired the game?

I missed intimacy. I missed my friends. I missed meeting new people and I missed the side of life that is spontaneous and curious and adventurous. So one morning I said, “There must be a way to stay connected to our curiosity, to our sense of improvisation, to the need to discover new things even if we can’t leave our houses." And I thought freedom in confinement comes to our imagination. And our imagination is most unbridled when we play or when we create.

On your podcasts and in some of your books, you've spoken about how desire requires mystery. And I think in the last year—

Right. How do you think all the time together at home has affected the desire dynamic for couples?

It’s been very challenging for the majority of couples. It has been a real dulling of the senses, no doubt. But with the game, if you’re telling me something that I don’t know or that I haven’t really heard in this way, you are once again somewhat mysterious and somewhat unknown and somewhat elusive. I’m made curious, and when I’m curious, I’m alert, I’m leaning in. I want to hear what you have to say — and that is erotic energy. When I say that, I’m not talking about sex per se. I’m talking about energy that makes you want to be alive — that makes you want to be curious, discover, explore — that energy. And from that energy comes sex.

Moving forward, do you foresee a shift in how we approach even our platonic relationships with our friends and with our colleagues?

Yes. First of all, a lot of people have had pods in the last year, and a pod is not a community. A community is the secondary and tertiary people. So now there is a return to the community. So that’s one. Then the second thing is friendship. I’ve been writing this whole month about friendship as a love story, as a story of intimacy, rather than continuously wanting to claim intimacy and love as only properties of romantic relationships.

People are extensively looking for purpose and are not prepared to just do stuff that doesn’t matter. There’s a sense that people have seen the importance of not trying to go at it alone, and that collective traumas demand collective resilience. I think we’ll see more creativity in how people are choosing to live with others, and not one person in an apartment.

Where Should We Begin? The Game

Shifting to a more collective communal mindset, do you think the last couple years will have any long-term effects in the way that America approaches monogamy?

If there’s any connection, it’s a correlation, not a causation. But no, I think people are warming to the notion of communal structures, of looser relational arrangements — which involves polyamorous arrangements — or the idea that family is not just two men, two women, two people. That there are many ways to make a family.

What’s one piece of advice you would give to couples who feel a little stuck right now?

More like this
The Juiciest “Would You Rather” Questions For Couples
By Alice Broster and Rachel Mantock
I'm 42 & I've Never Had Sex. Is It Too Late?
By Sophia Benoit
This TikToker Has Genius Advice For Boosting Your Dating Confidence
By Lexi Inks
What Causes Clinginess In Relationships?
By Marilyn La Jeunesse
Get Even More From Bustle — Sign Up For The Newsletter