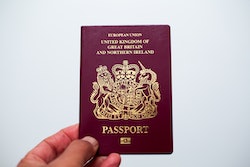 Another push to get “X” as an identifier on passports for non-binary people and gender non-conforming people will be brought to parliament on Non-Binary People’s Day this Tuesday. The new private member’s bill, backed by LGBTQ charity, Stonewall, will be delivered by Liberal Democrats equalities spokesperson Christine Jardine.

Private Members' Bills are brought forward by MPs and Lords who are not cabinet ministers, with the purpose of changing the law for the general public. Although only a small amount of private members' bills become law, it does help to bring public attention to important issues.

Jardine told the Guardian it would make a big difference for individuals who are outside of the binary of "man" or "woman," gender nonconforming, or are non-gendered. “There are hundreds of thousands of people in the UK who do not identify as exclusively male or female, but the Conservative government still refuses to give them the dignity of recognising their identities,” Jardine said. The liberal Democrats previously pledged for gender-neutral passports in their 2019 election campaign.

Jardine continued: “Introducing an ‘X’ gender option on passports is a relatively small change that would make a big difference to so many people’s lives. I find it utterly incomprehensible that this government still refuses to follow the example of so many other countries and make this change.” Already countries including Australia, Canada, Denmark, Germany, Malta, New Zealand, Pakistan, India, Nepal, and Ireland give citizens the option of gender-neutral documents. And in 18 states in the United States, you can mark your gender as "X" on a driving licence.

Non-gendered activist Christie Elan-Cane has been campaigning for over 25 years for people to have the option of using “X” on British passports. Alongside, Elan-Cane's activism, writer and editor Jamie Windust also started an online petition, with over 20,000 signatures. In March earlier this year, The UK's Court of Appeal ruled against gender-neutral passports. In the past, Elan-Cane has described bringing the case through the courts as "inherently discriminatory.” During the appeal hearing late last year, three judges were told that the current policy on gender-neutral passports is in breach of human rights and "unlawful."

More like this
Gen Z Are Twice As Likely To Identify As Queer, According To New Data
By Sam Ramsden
Here’s Where The NHS Nurses’ Strike Currently Stands
By Sophie McEvoy
Pret & Costa’s Coffee Is The Strongest On The High Street, According To Which?
By Sam Ramsden
90 Epic Truth Or Drink Questions To Play 'Say It Or Shot It' With
By Bustle UK
Get The Very Best Of Bustle/UK
Sign up for Bustle UK's twice-weekly newsletter, featuring the latest must-watch TV, moving personal stories, and expert advice on the hottest viral buys.