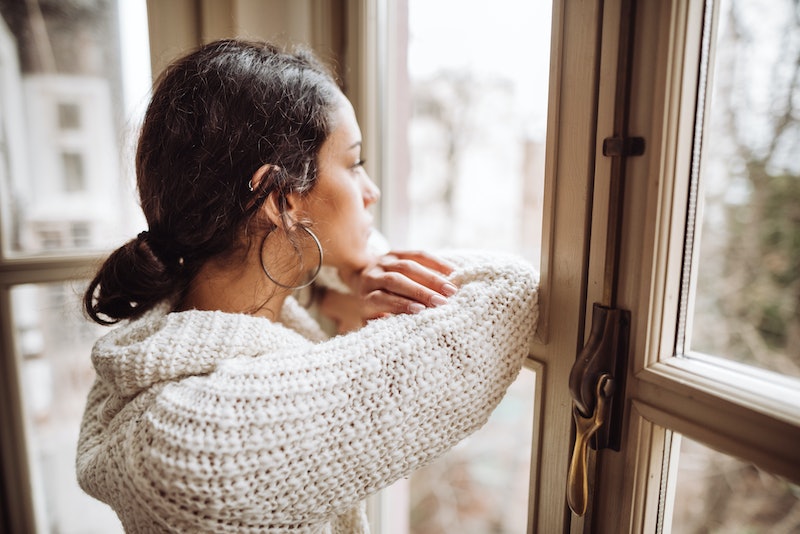 Over 100 million people around the world have been infected by COVID-19. While the physical effects of the disease — not to mention the millions of lives it’s taken — have been detrimental, COVID has also caused serious psychological distress. According to Dr. James Gordon, MD, a Harvard-trained psychiatrist, this includes trauma — which he says is crucial to treat.

The effects of COVID on mental health have been so drastic that experts (including the World Health Organization) have dubbed it the “parallel pandemic.” Gordon sees trauma as a widespread effect within that umbrella, which is different than depression and anxiety. “Trauma means injury to the body, mind, and spirit, and it happens to everybody,” he tells Bustle, pointing to examples like losing a loved one or experiencing heartbreak. “It puts your body in a low-level state of fight or flight as a survival response.” And this leads to a domino effect of negative psychological and physiological effects.

Here, Gordon — who recently published a book called Transforming Trauma on this very topic — explains how COVID is inflicting a global trauma, what this means for your health, and ways to heal.

How The COVID-19 Pandemic Is Causing Global Trauma

Everyone is facing uncertainty — about when the pandemic will end, or perhaps if they will continue to have a job — so Gordon says people are experiencing the physiological effects of trauma, whether they realize it or not. “What’s happening with the chronic threat of the pandemic and the economic uncertainty of the future is a threat to your health and your relationships,” he tells Bustle. “In some ways, [this trauma] is more threatening because it’s inescapable and there’s nobody who’s immune.”

Being unsure of your future for an entire year, as opposed to feeling upset for a while after a breakup, means the trauma is long-term — and the consequences of this are grim. “Because we’re in a chronic state of fight or flight, as far as our body knows, it’s a life or death matter,” says Gordon. “Ordinary activities of life are disrupted. Trauma is making it less easy to connect with other people because the body is acting as though it’s in a state of emergency.”

“In some ways, [this trauma] is more threatening because it’s inescapable and there’s nobody who’s immune.”

Of course, the levels of trauma will differ based on the situation. But when you’re chronically worrying about the effects of COVID, like your financial situation or the safety of you and your family (i.e. a threat perceived as too large to overcome), Gordon says your body goes into a last-ditch survival response called the freeze response. “The body kind of shuts down, puts out endorphins to numb yourself to physical and psychological pain, and there’s a kind of withdrawal,” he says. And this response leads to even more effects on your health.

The Effects Of Trauma

Gordon, who has treated people with COVID-induced trauma for the past year at his treatment headquarters The Center For Mind-Body Medicine, began to notice certain manifestations of the pandemic’s toll on mental health. “For some people it’s pretty constant: They’re chronically irritated, angry, having difficulty sleeping, or having difficulty concentrating,” he tells Bustle. “Often the freeze response will continue, which makes you numb to emotions when you’re feeling overwhelmed so you become unable to do anything about it — even get out of bed.”

On a physiological level, Gordon explains the chronic state of fight or flight affects your emotions and even cognitive abilities. “Fight or flight activity happens in the amygdala, the portion of the emotional brain responsible for fear and anger,” he says. “The number of cells there increase while activity in the frontal part of the cerebral cortex goes down. Those are areas responsible for self-awareness and for thoughtful decision-making.” Besides that, the connections between the vagus nerve and other cranial nerves — which govern speech and facial expression — are damaged, says Gordon. “So on a biological level, we’re in this state where we’re not connected to our rational mind or our self-awareness, which is why any approach to trauma really has to begin with helping people come back into balance.”

“The levels of anxiety and depression are already going way up, and will keep doing so unless we address them.”

But, if Gordon — who’s spent over 25 years researching and helping people heal from trauma — is correct in diagnosing the entire world’s population with trauma from the pandemic... what happens if you don’t confront it? “The effects are already starting. If you’re in a state of chronic anxiety agitation, or you’re feeling emotionally shut down, your blood pressure is going up, your heart rate is going up, and you’re more likely to develop cardiac problems,” says Gordon. The continually raised levels of cortisol (the stress hormone), he explains, can lead to health problems like diabetes. “The levels of anxiety and depression are already going way up, and will keep doing so unless we address them,” he says.

Some who are traumatized can even turn to substance abuse and behavioral issues to deal with the chronic stress, according to Gordon, who points to a similar effect in post-war societies. “There’s a cascade of behavior that can be catalyzed by a continual out-of-balance state,” he says. That’s where the healing comes in — the root of which is, essentially, self-care. “This pandemic should be a wake up call that we all need to learn how to take better care of ourselves,” says Gordon. “It’s not only about healing the trauma — it’s about putting ourselves into a state of balance so we can deal with the inevitable challenges that are going to come sooner or later.”

There’s not a magical cure for trauma. Gordon says it’s an ongoing process that takes conscious efforts in your everyday life. “What we’re talking about [with trauma healing] is a different way of living,” he says. In Gordon’s book, he shares a full program of healing techniques, though notes not each one is for everyone. “It’s about helping each person figure out what they need for themselves,” he says. Here are four of his top trauma healing techniques.

Deep breathing — out of the diaphragm rather than the throat — is a powerful relaxation tool. “Deep, soft belly breathing where you breathe in through the nose and out the mouth slows your heart rate,” says Gordon, who usually recommends people to do this for five to 10 minutes. Research has found this type of breathing to reduce cortisol, calm your nervous system, improve energy levels, and even boost your cognitive and emotional states.

Engaging in any form of physical movement or exercise can help as well, says Gordon. “It changes the biochemistry in our brains and makes us feel that we’re in control and that we can do something.”

Gordon also recommends expressive meditations, where you simply jump and shake the body for five minutes. “Just put on music that inspires you — often during the shaking, emotions will come up,” he says. “Part of the difficulty we have when we’re traumatized is that all feelings are shutdown, and expressive meditations bring your emotions up so they don’t stay congealed inside and cause us problems like being angry or experiencing chronic fear.”

Sometimes it can be easier to express how you’re feeling through art. Gordon says he often tells his patients to do three drawings: one of yourself, one of yourself with your biggest problem, and one of yourself with your problem solved. Since people don’t draw very often (if at all), when they put a pen to paper, he says that stuff will just come out on the page. “The primary problem may not be in the conscious mind and this can help bring it up and show you the root of what’s causing you pain.” From there, you can confront it.

Another technique involves using your imagination: “Guided imagery can help you find answers,” says Gordon. “Your intuition, your subconscious, your imagination — it will help you deal with issues by going to the heart of the matter.” To do this, he says to sit comfortably, close your eyes, and go to a safe space within your mind.

Once you’re there, allow a guide to come to you. “This guide is representative of your imagination and could be anything,” he says. “And in this trance-like state, you can start to have a conversation with the guide, and answers can come up.” Studies have found this to be an effective way to treat stress and anxiety — and you already have what you need in order to do it.

Ma, X. (2017). The Effect of Diaphragmatic Breathing on Attention, Negative Affect and Stress in Healthy Adults. Frontiers in Psychology. https://www.ncbi.nlm.nih.gov/pmc/articles/PMC5455070/