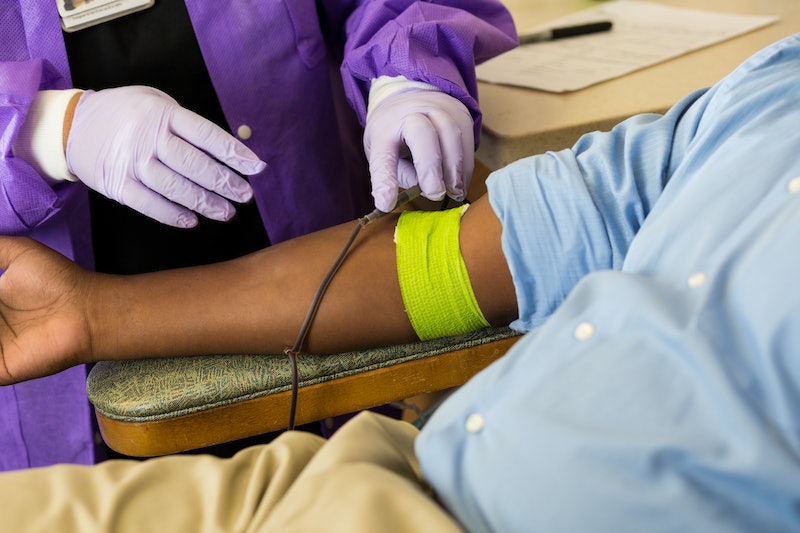 After decades of campaigning from organisers and charities, the rules around how gay and bisexual men in England, Scotland, and Wales can donate blood finally changed this summer.

The change — which came into effect on 14 June 2021 — means that men will no longer have to disclose whether or not they have sex with men. Instead, everyone, regardless of their gender or sexual orientation, will be asked if they have had anal sex with multiple partners or a new sexual partner. They will also be asked whether they have recently used PrEP or PEP (medication used to prevent HIV infection). If the answer to any of these questions is yes, the donor will need to wait three months before donating blood. Prior to 2017, gay and bisexual men would have to wait up to 12 months, an approach that prevented many from being able to donate life-saving blood.

While this move has been lauded as a giant step forward in tackling discriminatory health practices, the rules around how other marginalised groups can donate blood are still miles behind — especially for Black communities in England.

As the rules currently stand, donors must wait a minimum of three months to give blood if they have “a partner who has, or you think may have, been sexually active in parts of the world where HIV/ AIDS is very common. This includes most countries in Africa.”

According to The Voice, Britain’s only Black national newspaper, people returning from Ghana, Angola, and Cameroon may have to wait up to four months, and for those returning from Uganda, Nigeria, or Sierra Leone, it can be up to six months.

The Terrence Higgins Trust (THT), a sexual health charity, calls this a “discriminatory restriction.” The group states on its website that asking the question regarding countries where HIV/AIDS is very common (which has been removed in both Scotland and Wales) is “vague and difficult to interpret by both individuals and healthcare professionals.” At the same time, it “acts as a significant barrier for many who wish to donate and at the expense of the blood service’s urgent push to get more Black people to give blood.”

In a statement sent to Bustle, THT also says that this rule “[goes] against the evidence from the government’s own advisors, who supported its removal.”

Last year, Francis Gĩthae Murĩithi’s story surrounding blood donation made headlines. Murĩithi, who works as a doctor in Nottingham, has a rare and much-needed blood type but was told he could not donate blood because his wife is Kenyan. Although Murĩithi had already been tested for HIV and he and his wife were monogamous, he was still unable to give blood. Speaking to the BBC, Murĩithi said, “I don’t want to appear to be a troublemaker but the NHS blood donation system needs to change to accommodate more people.”

Not only is this rule regarding countries considered discriminatory, but harmful also. Since people from the same ethnic background are more likely to have matching blood groups, communities with fewer donors will be left more vulnerable.

The urgent need for Black blood donors is clearly illustrated when you look at statistics surrounding sickle cell anaemia, a condition that affects the red blood cells and that requires frequent blood transfusions.

Sickle cell anaemia is most common in people from African and Caribbean backgrounds. In the United Kingdom, 15,000 people have sickle cell but only 1.5% of blood donors are of Black heritage, a spokesperson from the Sickle Cell Society’s blood donation team tells Bustle.

One such variation is the Ro blood subtype. Ro is 10 times more common among people from African and Caribbean backgrounds, but only 2% of regular donors have the Ro subtype. This has created a huge issue for Black communities when it comes to supply and demand, leaving some sickle cell patients in life-threatening situations.

The NHS has long recognised this issue and has created various resources explaining why more Black people need to donate.

The government has also acknowledged what’s happening, setting up a fundraiser to encourage more people from Black and minority ethnic groups to donate blood. The £600,000 Community Investment Scheme, which was run by NHS Blood and Transplant, funded community and faith organisations to drive awareness, understanding, and behaviour change.

However, as THT points out, the government is still actively creating barriers and worsening health inequalities through the blanket blood donation rule regarding countries where HIV/AIDS is common.

The Push For An Individualised Approach

The Sickle Cell Society and THT are in agreement that an individualised approach that assesses “high risk behaviours” would be a more impartial and effective way to screen potential blood donors than the current systems that are in place.

While there may be a number of reasons why Black people are hesitant to donate blood — including myths and misconceptions around the process or mistrust of institutions like the NHS — the rules around African countries has been identified as a key barrier, says the THT.

“The Department of Health & Social Care must be guided by evidence-based methods that do not place a blanket and discriminatory rules on groups,” the THT says. “We urge the government to rethink its lack of action.”

The landmark change for gay and bisexual men wishing to give blood is something to be celebrated. The more people who are able to donate, the more lives saved. However, despite this progress, it’s clear we still have a way to go in ensuring blood donation is open and fair for all.

If you would like to register to take part in the Sickle Cell Society blood donation project Give Blood, Spread Love, you can do so here.