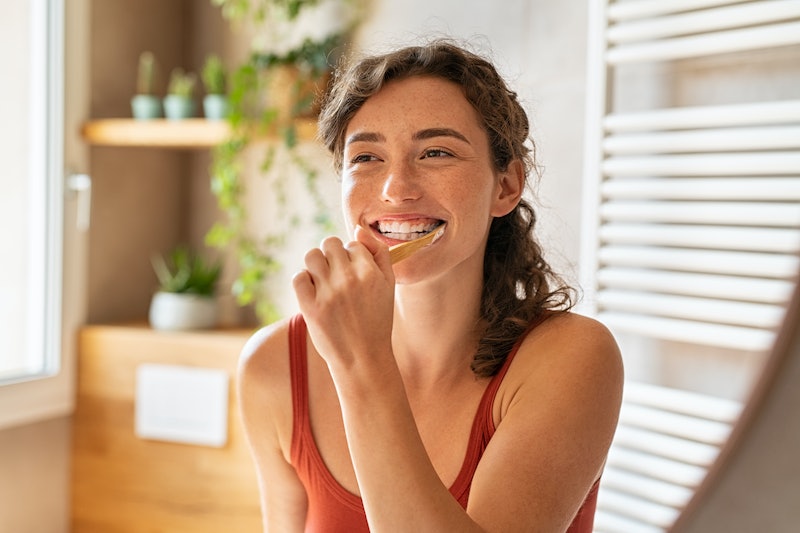 You may have noticed that there are suddenly so many different ways to whiten your teeth. The hashtag #teethwhitening on TikTok has nearly two billion views and is full of videos showing people whitening their teeth with everything from trays and strips to rinses and gels — and those shiny results are enough to make you want pearly whites of your own. But is teeth whitening actually safe?

According to Dr. Sharon Huang, DDS, MICOI, a dentist and founder of the dentistry practice Les Belles NYC, not all of these products are created equal. In fact, most options contain a whitening agent that’s mixed with a mild to moderate abrasive. “Hydrogen peroxide and carbamide peroxide are two of the most common ingredients used to whiten teeth,” she tells Bustle. “The reaction from these free radicals lifts stains from teeth and makes [them] appear whiter.”

While many teeth whitening tools are considered safe, some can lead to tooth sensitivity, says Huang. If you really overdo it by leaving the product on too long, you can also damage your enamel and increase your risk of cavities down the road. “If you feel any pain at any time, you should stop using the whitening product and communicate that to your dentist,” she advises. “Feeling transient sensitivity while whitening is normal — a few seconds of ‘zingers’ here and there — while having persistent sensitivity on a tooth or an area is not.”

If you’ve been wondering if teeth whitening is safe, keep reading for what dentists have to say about the risks and rewards of the most common options out there.

Whitening At The Dentist

According to Dr. Brad Eckhardt, DDS, dentist and owner of Elite Dental Centers, getting a whitening treatment at your dentist’s office is a surefire way to brighten your teeth by several shades — sometimes in as little as 30 minutes. It’s also the safest option because, well, it’s done by a professional.

According to Huang, your dentist will apply a barrier to protect your gums before administering a professional-grade whitening gel to the teeth along with anti-sensitivity agents so that you don’t feel anything. They may also speed up the process by shining a blue LED light on your chompers to activate the hydrogen peroxide or carbamide peroxide in the whitening gel.

Professional teeth whitening gets you in and out fast so you don’t spend a ton of time with harsh chemicals on your teeth. The one downside to take note of? Eckhardt points out that in-office treatments can be pricy, so get ready to pay at least a couple hundred dollars.

Whitening strips are a super-popular way to whiten your teeth at home, especially if you’re on a budget. Options like Crest White Strips contain the active ingredient hydrogen peroxide to whiten teeth a couple of shades and are typically easy to use — so you’ll be happy to hear that Huang says products like these are considered safe and effective. You’ll just have to read the instructions carefully before giving them a try, cautions Huang. “Don’t leave anything on your teeth longer than what is recommended, as that can lead to sensitivity or even pain,” she says. Usually, it’s a 30-minute deal, so you won’t want to sleep in them or leave them on for longer in a quest for whiter teeth. You also need to be careful not to have them placed over your gums as that can lead to sensitivity as well.

Whitening gels typically contain carbamide peroxide. According to Dr. Lana Rozenberg, a board-certified cosmetic dentist, you swab the solution onto your teeth using a small brush twice a day, typically for 14 days. “You will generally see a significant change in color after a few days, and the final results usually last for about four months,” she tells Bustle. As long as you follow the instructions on the box — and avoid painting gel onto your gums — it can be a safe and effective way to brighten your pearly whites. Again, if you do experience sensitivity while whitening, stop using the product and let your dentist know.

As a side note, it’s important to steer clear of any at-home whitening treatments that contain sodium chlorite. “This is a volatile compound that reacts strongly when it comes in contact with an acid, which can be from food, drinks, medications, and is toxic,” Huang says. “It will also ruin the enamel on your teeth, which can lead to accelerated tooth decay or cavities.”

You could also opt for a rinse that lightens your teeth. “Whitening rinses, like most mouthwashes, freshen breath and help reduce dental plaque and gum disease while also including ingredients like hydrogen peroxide that whiten teeth,” says Rozenberg. To use them, simply swish the rinse around your mouth for 60 seconds twice a day before you brush your teeth.

Experts say these are generally an easy and safe way to add an extra gleam to your teeth, but don’t count on seeing a major difference. “Rinses are usually less effective than other over-the-counter whitening products because a rinse is only in contact with the teeth for two minutes a day, as opposed to 30 minutes for the strips,” says Rozenberg. The limited contact is why rinses are mainly safe to use, but it also means it can take up to 12 weeks to notice a difference. That said, a 2019 study showed that using whitening rinses after a bleaching procedure can cause changes to your tooth enamel — so if your teeth are on the more sensitive side, check with your dentist before trying one of these.

A tray-based whitening system uses a peroxide-bleaching agent, says Rozenberg. You put it in a mouthguard-looking appliance, pop it onto your teeth, and wear it for a prescribed amount of time every evening.

You can get a custom tray from a dentist or buy one over-the-counter. And, as you would probably guess, the trays from your dentist are better. “Ones from the dentist produce faster and more effective results because they contain a stronger peroxide-bleaching agent,” says Rozenberg.

They’re also often customized to fit perfectly, while over-the-counter trays come in generic sizes. If the tray doesn’t fit correctly or if it’s too big, Rozenberg says it might allow the bleaching agent to come in contact with your gums, which can lead to dreaded sensitivity and irritation.

Whitening toothpaste is considered safe, Eckhardt says, as long as you brush super gently. “They contain whitening ingredients like special abrasives and polishing chemicals that help remove stains and make your teeth appear whiter,” he says.

If you have sensitive teeth, however, these might not be a good choice. “The abrasive ingredients in whitening toothpaste can thin the enamel on your teeth and cause more damage in the long run,” says Rob Raimondi, DDS, a dentist and co-founder of One Manhattan Dental. The worst offender in the category? Charcoal toothpaste, which he says essentially scrubs away the very top layer of your teeth where stains are.

If you catch yourself eyeballing a whitening pen at the drugstore, consider passing it by. When people have irritation from whitening treatments it’s likely because the gel was smeared onto their gums, explains Dr. Thomas J McCarthy, a dental advisor with SportingSmiles. This is something that’s super easy to do with pens, which typically contain hydrogen peroxide or carbamide peroxide — both of which can irritate the gums.

Huang doesn’t recommend them either. “The LED light kits work by instantly drying out teeth to make them look whiter, but when your teeth rehydrate, the whitening effect goes away.” She calls this method “temporary at best.”

Your best bet is to get your teeth whitened under the supervision of your dentist, says Huang, but experts consider strips and gels as your next-best options. Other alternatives, like whitening toothpaste and pens, may lead to more sensitivity, while tools like trays or lights aren’t always as user-friendly. Keep this in mind as you consider what feels best for your teeth — and when in doubt, ask your dentist for advice.

Rob Raimondi, DDS, dentist and co-founder of One Manhattan Dental