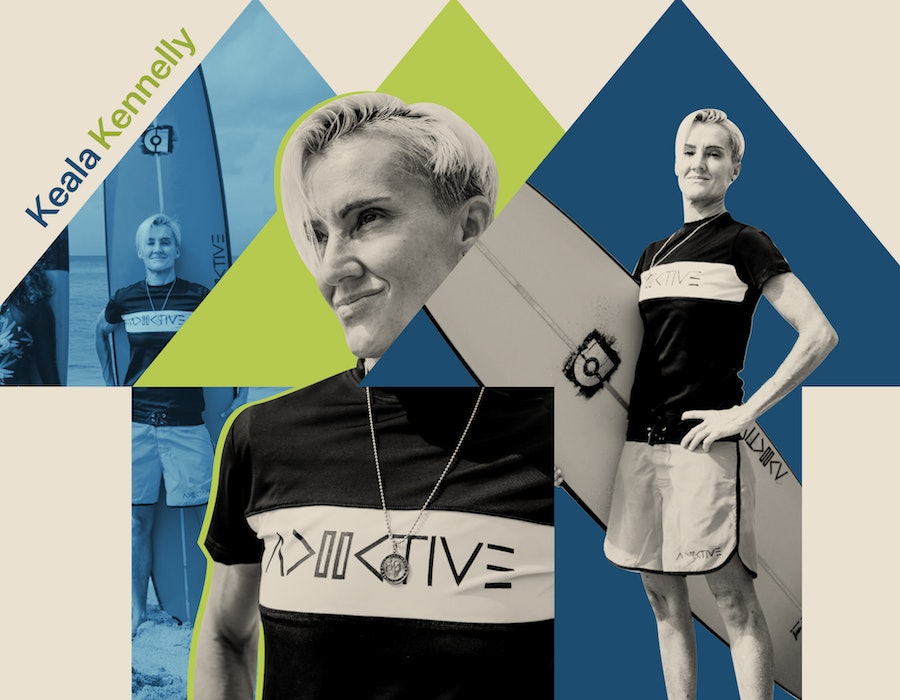 Red Bull Magnitude
The Level Up

In "The Level Up," changemakers in the fitness and wellness industries tell us how they're making an impact in their communities, from pushing for inclusivity to promoting body acceptance and so much more. Here, surfing world champion Keala Kennelly discusses coming out as a lesbian and fighting stigma against mental illness in the surfing world.

Keala Kennelly, 42, has been surfing for as long as she can remember. Growing up in Kauai, Hawaii, she didn't have the opportunity to compete in surf competitions against other girls — so, she took on the guys starting at age 7. Generally, she won.

From a young age, she knew that to pursue being a champion surfer, she'd have to crash through a lot of barriers. The name-calling and gender-shaming from other kids was relentless, even in grade school. "They made it pretty rough," she tells Bustle, but she still wanted to make — and ride — the biggest waves she could.

After graduating high school, Kennelly went right to the pros. She gathered a lot of big-time wins after being accepted into the World Championship Tour, an elite competition hosted by the World Surf League, spanning multiple events, locations, and months. However, Kennelly says that there was intense pressure to hide who she is: between competing on tour, coping with undiagnosed bipolar depression, and being in the closet, she says, "I don't know how I survived those years."

"The competitive surfing world and the surfing industry overall seem really laid-back, but it's really not that way," she says. "Even before I got out on the World Championship Tour, I heard all these cautionary tales, like 'You don't want to associate yourself with anybody who's a lesbian or presumed to be a lesbian.'" It took her finding other gay surfers to realize she could be open about her sexuality and be a pro surfer.

Since coming out in her late 20s, Kennelly has fought for equal pay for women surfers and brought awareness to being gay and a world champ. Kennelly is currently competing in Red Bull Sport's Magnitude, the first women’s-only big wave contest across Hawaii.

Below, Kennelly explains how she decided to come out as a lesbian and about her mental health.

What was surfing like as a kid in Kauai?

Against that backdrop, what made you decide to come out?

Those years before I came out were really hard. I had undiagnosed bipolar depression and was having lots of suicidal ideation at that time. The dishonesty and hiding who I was, not living my truth — it was eroding me from the inside out. I lived on pins and needles, trying not to get outed all the time. It was really scary.

But I just got to a point, toward the end of my time on tour, where I said, "I can't do this anymore. I don't care what happens." It's not like I made some big statement — I just started bringing girlfriends on tour and not introducing them as friends. I would just kind of say, "This is my girlfriend, deal with it." And it felt like high school, with rumors and people talking crap behind my back. That was part of the reason why I left the tour and didn't go back to it.

What has the surfing world been like for you since you came out?

I lost most of my sponsors after starting to live my life as an out lesbian — I was told that I was no longer "marketable," even though I was nominated for an ESPY and was the first woman to be invited to the Eddie Aikau Big Wave Event. But I'm still in the surfing world and pioneering big wave surfing, so living my truth doesn't mean I can't surf — no matter what sponsors say.

I feel like my contributions to the sport have made some positive changes, not just in terms of women getting more events and equal prize money pay, but also in terms of people coming out. Tyler Wright is another out championship surfer now, and it's so important because it helps LGBT youth say, "I can be me and still accomplish what I want."

Tell me about how living with bipolar depression has impacted your surfing, or vice versa.

I finally got diagnosed three years ago. My diagnosis was another thing where I didn't think I could be open and coming out about my bipolar and my mental illness. I'd already come out as a lesbian, and then I had to have a second coming out as a mentally ill person?

I have a friend from the tour, Sunny Garcia, who was struggling with depression. He was open about it on social media, so I reached out to him privately. He said that I shouldn't be afraid of asking for help. He attempted suicide soon after. After that, I felt like, "OK, I have to be open about my mental illness, because if I can help just one person, then I need to do this." It was very similar to coming out as gay. I know it's helped a lot of people, and that's worth it.

What opportunities do you see for creating community for LGBTQ+ people and folks with mental illnesses in the surfing world?

A lot of community things are unspoken. I'd be hanging out with one of my good friends on tour; we'd be at barbecues where it was all women, and some were sitting really close together. It was this unspoken thing, a safe space, kind of like 'don't ask, don't tell.' But even though it was never really talked about, I felt like I was in a support group.

Otherwise, I haven't seen a lot of LGBT communities within the surfing world. It's still very homophobic, and there's not a lot of brand inclusivity in terms of sponsorships and advertising. Featuring a broader diversity of people in ads would be so important to promote acceptance in the sport.

I spent so many years being ashamed, hiding who I am. But I needed to show people that it's not shameful to be me. I'm proud of who I am, and when you come out, you're teaching people that you are not something to be ashamed of. Tyler Wright was sponsored by Rip Curl before coming out and they didn't drop her, which is nice to see. She's so much more accepted today than I was 10 years ago, which means that there's been progress — and that's just what the community needs.

More like this
19 Latinx Therapists & Mental Health Experts To Follow On Instagram
By Kaitlyn Wylde, Naydeline Mejia and Lexi Inks
Megan Rapinoe's Relaxation Hack Is Super Dreamy
By Carolyn Steber
I Tried The Ice Barrel's Cold Therapy Tool & Now I Like Ice Baths
By Allie Flinn
Trainers Reveal When It's Better To Run Before Or After A Workout
By Carolyn Steber
Get Even More From Bustle — Sign Up For The Newsletter