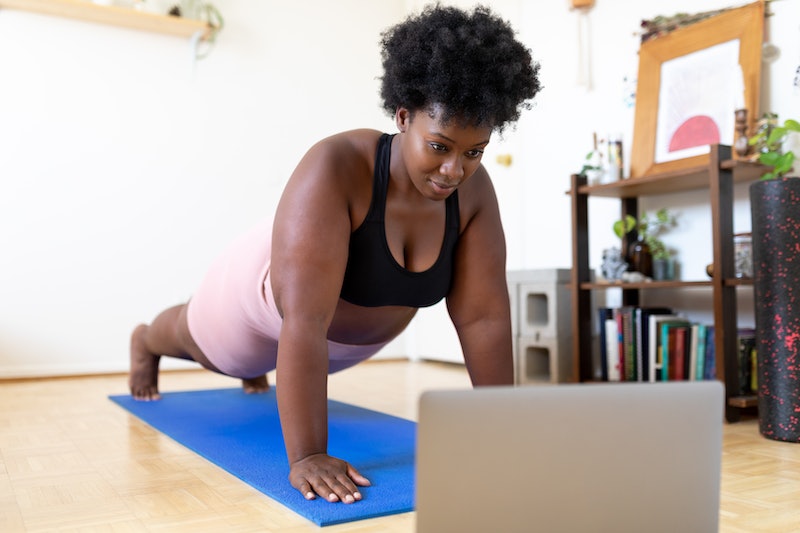 You know a workout challenge must be good when it inspires you to not only do push-ups, but also shoulder taps, mountain climbers, and plank jacks. That’s the case with the increasingly popular left-right push-up challenge on TikTok — the latest fitness craze to join the growing prevalence of exercise routines set to music.

Currently, the hashtag #leftrightpushupchallenge has over 77,000 views as well as thousands of videos posted by people doing the bodyweight-based regimen to the beat of “Grab Da Wall & Rock Da Boat” by 504 Boyz and Weebie. The straightforward lyrics — “left, right, left, right, left, right” — speed up over the course of the song, and the pace of the push-ups, mountain climbers, and plank jacks coincide with it perfectly. But is the left-right push-up challenge actually a good workout, or just another TikTok trend?

According to Vanessa Liu, a fitness trainer and nutritionist, it’s legit — and it’s efficient. “Because you’re in a plank position for the whole challenge, your body has to recruit a lot of muscles in a short amount of time to keep itself stable,” Liu tells Bustle. The moves that follow target your arms, develop your core strength and stability, and even boost your heart rate, she explains.

Another bonus is that it’s easily tailored to any fitness level. “You can increase or decrease the difficulty without losing the integrity of the challenge by adjusting the width of your feet,” Liu says. If you’re new to push-ups, keep your feet wider apart. If you want a challenge, keep them closer together. You can follow the sequence just once to start, or aim to repeat it three times through as you get stronger. Want to give it a go? Here are all the muscles you’ll work, along with tips for doing it correctly.

The Benefits Of The Left-Right Push-Up Challenge

This move works your shoulders, as well as your arms and core. “That’s because your shoulders are trying to stay stable to hold you up in the plank position the entire time,” Liu says. “It strengthens your core, too, because as you alternate taps, your core has to fight to avoid rotating side to side.”

As the song speeds up, you’ll do a quick burst of mountain climbers, which work the obliques and shoulders as they boost your heart rate. “They’re also great for challenging your hip stability and lower body coordination, since you have to alternate feet,” Liu says.

A few beats later and you’ll start jumping your feet in and out quickly from the plank position (aka plank jacks). “Plank jacks target your entire body, while also raising your heart rate,” Liu says. “They strengthen your upper body and core and they also help you build muscle and power in your lower body muscles. Your hamstrings, glutes, and calves all have to activate in order to keep you steady while you’re moving your feet in and out.” But the challenge is so tricky because you’re not just doing plank jacks, which are hard enough on their own — you’re lowering down into a push-up as your feet hop in and out. And this element, of course, works your arm and shoulder strength.

One TikTok challenge later, and you’ve worked your upper body, core, lower body, increased your heart rate, and (hopefully) had a little fun. “That’s the essential part of working out consistently and making it a habit,” Liu says. “This challenge is a fantastic way to add some fun and variety into your routine.” And all it takes is less than 30 seconds, so maybe try it the next time you need a break from your desk.

More like this
10 Primal Movement Exercises That'll Improve Your Mobility
By Carolyn Steber
How Many Burpees Should You Do Per Day? Here’s What Fitness Trainers Say
By Carolyn Steber
The 11 Benefits Of Aerial Yoga, According To Trainers
By Carolyn Steber
The Case For Following A Menstrual Cycle Workout Plan
By Emma McGowan and Carolyn Steber
Get Even More From Bustle — Sign Up For The Newsletter
From hair trends to relationship advice, our daily newsletter has everything you need to sound like a person who’s on TikTok, even if you aren’t.