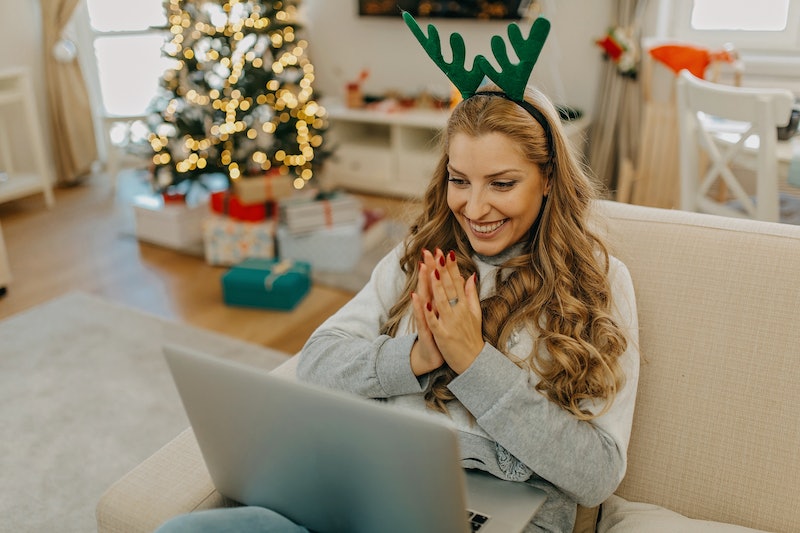 December's automatically generated influx of garlands, cinnamon-scented candles, and twinkly lights can evoke strong feelings among holiday haters and those that wait till Christmas Eve Day to even consider a tree. If your natural inclination is to veer toward team Grinch versus team Whoville, you might be missing out on the mental health benefits of the holiday spirit.

"Pushing yourself to engage in activities you might otherwise avoid is a legitimate strategy for not only persevering, but ultimately thriving," clinical psychologist Caroline Fleck, Ph.D., tells Bustle. "Particularly when there's an opportunity to lean into a communal festivity." Yes, there are actual healthful benefits to being festive. Didn't Buddy the Elf teach us anything?

While a typical holiday season might include an increase in socialization and bonding, which leads to an increase in oxytocin production, the 2020 holiday season is going to come with a lot of Zooming, a lot of alone time, and many adjusted expectations. It's understandable to feel like you'd rather just go to bed and wake up in January. But putting effort into making your space look festive, even if no one will see it but you, can actually inspire a positive psychological reaction, kind of what you'd expect during holidays past.

Pretending to be twinkly-eyed over twinkle lights can be such a mentally transformative action "that it is the secret ingredient in evidence-based treatments for a wide range of mental health disorders," Fleck says. The "fake it 'til you make it" method is used with exposure and response prevention for anxiety, behavioral activation for depression, and prolonged exposure for post traumatic stress disorder (PTSD).

Though it might be hard to believe in the power of lighting candles, baking spiced cookies, and blasting Mariah Carey, these surface efforts can actually inspire emotional changes. Putting up some lights is easier than hours of therapy, but small, aesthetically pleasing tasks can actually trick your brain into releasing feel-good hormones, whether you're feeling the holidays or not. The reason, Fleck explains, is actually quite simple: going through the motions of an activity is an example of biofeedback, aka consciously manipulating your body's systems to achieve a result, such as doing breathwork exercises to lower your heart rate.

"Singing Christmas carols while clenching your fists and silently judging everyone around you isn't likely to result in a super positive experience," Fleck says of the team Grinch attitude. Challenging yourself to lean into the experience, even if it doesn't feel natural, doesn't just set you up for a positive psychological experience, but gives you an opportunity to get fully involved in something that you didn't even realize you had the energy for, or interest in.

You're not going to get the same rush of oxytocin that you'd get hugging a family member, but adding a little superficial merriment to your apartment will certainly trick your brain into releasing a little bit of dopamine. So if you're feeling particularly Scrooge-ish this year, you might want to consider doubling up on the the string lights and stocking up on peppermint.