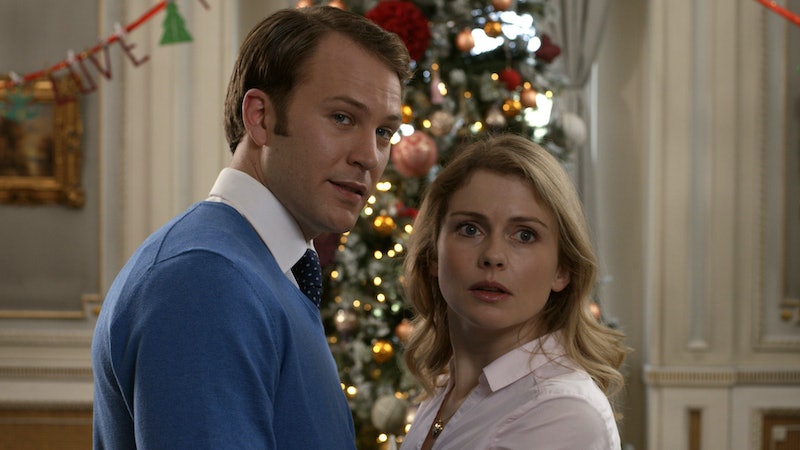 'Tis the season to be self-swaddled in a festive blanket on the couch, marathoning holiday movies and feeling dissatisfied with your love life because it doesn't reflect the peppermint-flavored fairytales on the screen. From the safety of the couch, these seasonal flicks might appear innocuous, but holiday rom-coms have surprising effects on the brain.

The tropes are familiar: an unlikely pair are brought together with a little bit of Christmas magic, a small town gathering and the clever placement of a mistletoe. By the time the credits roll, you're a believer: fairytales do exist. And while this belief might appear to be fleeting, clinical psychologist and adjunct clinical instructor at Stanford University Caroline Fleck tells Bustle that it stays with you.

No matter how much space you keep between the screen and your personal life, if you watch holiday rom-coms, your IRL love interests may not compare. "We tend to overestimate our ability to distinguish fact from fiction. Knowing that a story is made up doesn't mean we won't still be influenced by the expectations or stereotypes it projects," Fleck explains, adding that even though you know that Happiest Season is fictional, you still fall for it. According to Fleck, rom-coms set and reinforce insidious expectations despite how entertaining (or ridiculous) they might be.

There aren't studies on holiday rom-coms specifically, but research on other film genres show how much influence these forms of entertainment can have. Researchers at Lancaster University found that magic-forward movies like Harry Potter inspired creativity in children, and researchers at the University School of Science in Espoo, Finland found that comedies, or laughing in general, reduces stress and increases the production of positive brain hormones, beyond the length of the film — ergo, watching comedies creates long-term positive effects on health and mood.

Rom-coms are a decidedly different situation, since they model behaviors in romantic relationships that may not be desirable. "The problem is that although we all acknowledge that rom-coms are fanciful, we often fail to appreciate the extent to which they are subtly informative." Fleck goes on to explain that despite viewing her couples counseling clients as "intelligent, kind, and insightful" who are "well able to distinguish fiction from reality," there remain unrealistic expectations that they hold for their romantic relationships. "Grounding fairy tales in reality is like my day job, and it's made harder every year at Christmas when Love Actually starts playing on loop," Fleck admits.

As someone who routinely watches Love Actually, I can attest to that very bubble of suspended belief that stretches around you after consuming two and a half hours of down-to-the-wire romantic declarations and red-nosed snowy kiss sequences. Despite the fact that I understand that these stakes are unrealistic and these acts are fantastical, I find myself scrutinizing my own relationships for that same magic.

According to Fleck, even the most grounded realists still struggle to maintain a standard of a healthy relationship that's not been distorted by unrealistic tropes often found in holiday movies. "What's sad about this work is the observation that in unknowingly striving for the unattainable, so many of us are failing to attend to, recognize, and seek the types of romantic experiences and relationships that are healthy, genuine, and representative of real love," Fleck explains.

While your brain might not be rotting into a fermented puddle of candy cane soup when you watch a holiday rom-com, you may be accepting subliminal messages about what's normative in relationships. That is in turn screwing up your ability to have realistic expectations or a critical eye when it comes to your own love story. So the next time you cozy up on the couch for a day of Hallmark movies, know that no one is impervious to the harmful effects that holiday rom-coms have on our personal lives. Besides, you know how the movie is going to end anyway.

This article was originally published on November 15, 2019