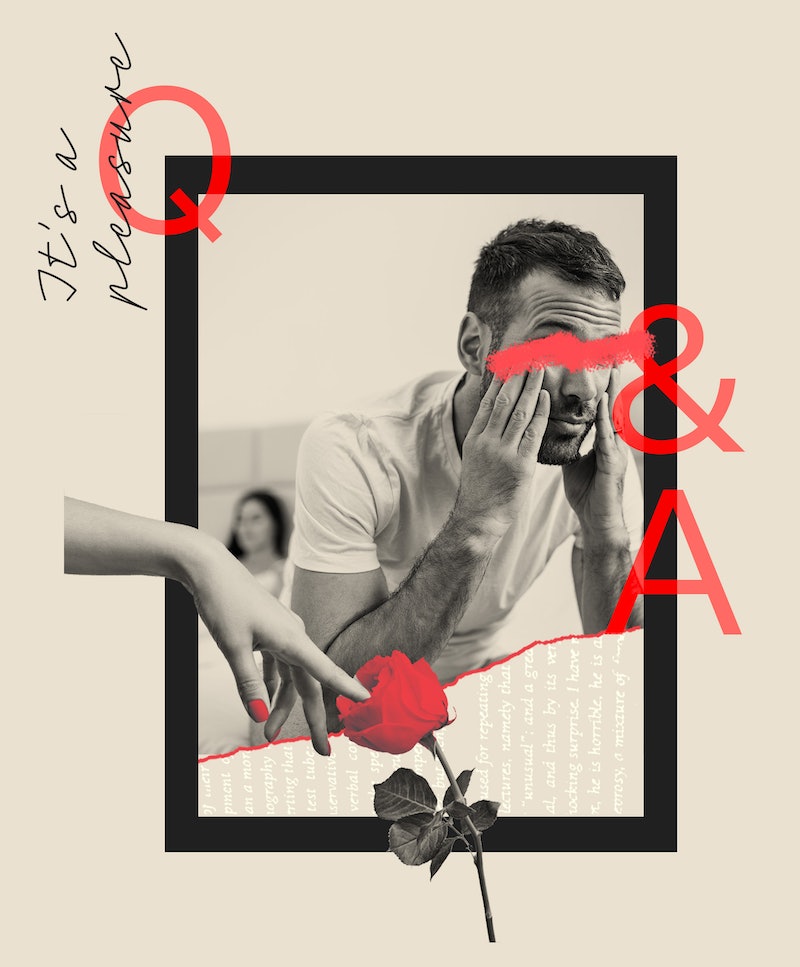 Q: I love my husband and believe that we have a marriage that we have fought hard for and put work into. We came from nothing and now live a pretty great life. We have always had a great sex life, and I still want him like nobody’s business. In the last year or two, my husband at times has failed to get aroused or gone “soft” during sex. It is causing a lot of tension in our marriage, as we are both left feeling inadequate. How can I not feel so undesired, mad, and hurt when this happens? I have tried talking to him, and I’ve tried just continuing sex, but usually it ends in me crying and leaving the room. My real sore spot is that I feel like if there was some young porn star vixen in front of him, I know he would be hard as a rock. It makes me feel like the problem is me and I shut down.

How do I get over these intense feelings to move forward in my marriage? I hate my sex life now and hate that my husband acts like he has no interest; I believe this might be his way of dealing with it. You can’t convince me that a 37-year-old man has no sex drive. I also believe this will lead to infidelity on his part, finding someone that does turn him on. Emotionally, it makes me feel like I’m just waiting for him to cheat on me, but also by me acting this way I am in turn kind of making it a reality.

A: Whoa, whoa, whoa! You’re doing Simone Biles-level mental gymnastics right now, which is understandable because your feelings are hurt, but these assumptions are also ultimately negatively impacting your marriage, yourself, and this person you love so much. There’s a lot of good news here — your problems are all addressable, if not solvable! But first, you’re going to have to unlearn some patterns and judgments.

Brains loooove filling in blanks — a fact that optical illusions and cheeky advertisements and suggestive movie trailers rely on. Humans are really good at making assumptions. Right now, your brain is trying to fill in missing information, to answer the question: “Why isn’t my husband getting or staying hard?” And, in the face of a lack of answers, your brain has filled in the blank with your own insecurities. We all do this! When someone gets rejected romantically or sexually, it’s really common for them to assume the reason is Their Biggest Insecurity, despite the fact that it might be any number of things.

Just to show you how silly this is, let’s pretend I’ve always been insecure about my elbows. If I went on a fantastic first date but she never texted me ever again, I might think, “She hates my elbows,” which is ludicrous enough. But now let’s say I applied that to everything. “My sister has been distant lately. Wow, my elbows really are ugly!” You are doing that with your own feelings about your sexual desirability.

First and foremost, erectile dysfunction is common. It’s also correlated with age: About 20% of people in their 20s experience ED, 30% of people in their 30s, 40% of people in their 40s, and so on. Despite what the media has told you, most ED stems from vascular causes rather than psychological ones. That’s why it’s imperative that people who are experiencing new ED see a doctor. Seriously. Your husband should see a doctor to make sure everything’s OK. Even if the cause is psychological — which is also something your husband should likely talk to a doctor about — that would mean it was likely connected to serious and real mental health concerns like anxiety or depression. None of those things are about you. None. No one has ever been diagnosed with ED because their wife isn’t hot. Ever. Your assumption that his health issue is about you is not only hurtful and self-centering, but it’s also probably wrong.

You have no evidence — at least not any that you’ve shared — that your husband is perfectly capable of getting and maintaining an erection with a “young porn star vixen.” In fact, you have no evidence that he wants to cheat at all. (You have the same amount of proof that he’s keeping a raccoon named Terry in the garage as a pet.) Those are ideas you completely made up and then got mad at him for. It’s an unfair way to treat anyone, but especially your partner, the person you’re trying to love the best and most out of anyone. So it’s on you to break the cycle. In order to have a good, kind marriage, you have to stop.

This is a treatable health problem, not a failing on either of your parts.

I know you say that I can’t convince you that a 37-year-old man can’t possibly have no sex drive, but I’m going to try my damnedest to walk you through why that sentence is harmful to both you and your husband. I feel like, as a society, we’ve had some discussions about the roles we force women to play sexually and the way we categorize them based on the type or amount of sex they’re having. For example, there’s the incredibly insulting Madonna-whore complex, which reinforces the misconception that women can only be sexual objects, not sexual agents. We believe a lot of bullsh*t about women’s roles in the bedroom (or the bar bathroom).

A less-discussed counterpart to this is that we often hold beliefs about men’s sex lives that are wrong and unfair. Men are not sex machines that simply turn on when they see a boobie. Not only is that heteronormative and cisnormative as hell, it’s wrong. Many, many men of all ages are not easily aroused. Many, many men of all ages need foreplay to get turned on. And many, many, people with dicks have trouble getting hard even if they are aroused.

Now, maybe your husband used to be a little horndog and you’re wondering where that went. That’s fair, but again, you’re filling in the blank with “he must not want me.” Sex lives are not static. Bodies, desires, fantasies, abilities — they all change throughout our lives. It’s very common for arousal to wane (or wax!) at any age, for many reasons. Your beliefs that men and women have certain roles they must play in sex are going to cost you a lot if you don’t examine them. Sex can look like a lot of different things, and it’s up to you and your partner to decide and explore that.

You need to talk to your husband, first to apologize — you have made his health about you and likely reinforced or dismissed his feelings of inadequacy. Then you need to make a plan together for how to change your sex life to adapt to this actually rather minor issue. Your feelings around it aren’t minor, and that’s fair and fine. Both of you are more than welcome to be frustrated, sad, or pissed off from time to time about his dick not doing what it used to do as easily. But this is a treatable health problem, not a failing on either of your parts. The treatments for ED are pretty safe and effective, which is great news! Beyond addressing health problems or lifestyle choices that might cause ED, the most common first-line treatment is a PDE5 inhibitor, which you might know as Viagra or Cialis. The pills aren’t going to give anyone an instant erection, but they turn up the volume on positive signals sent to the brain. Your husband’s doctor may have suggestions for other treatment options, too.

Let me tell you the real secret, though — the thing I need you to take away if nothing else: There is plenty of good sex to be had that doesn’t involve a penis. Please read that again. You can use dildos, vibrators, mouths, fingers, and more. Also! Both partners don’t always need to come. It’s OK for sex to just feel really nice for both people. You can shower together, you can cuddle naked. You can do hot things that aren’t just putting a hard penis in a wet vagina. You both have to get more creative, more curious, more forgiving of your bodies, and more loving. Let go of the ideas you had about what sex used to look like and get excited to explore new stuff! You say you’ve both been feeling inadequate? Talk about that! Share those feelings! Ask for comfort from one another. Ask for reassurance. Think of activities that make you feel sexy or desired that aren’t about his dick.

Dicks are a body part, plain and simple. Sometimes body parts don’t work the way we want them to. Yes, this affects what you do in the bedroom. But if your partner needed a knee replacement, that would also affect what you do in the bedroom. And you’d adjust! You’d find new positions, and new sex acts, and I bet you’d do it with kindness and grace. You wouldn’t be convinced that it’s about you. You might be sad that sex has changed — and you’re welcome to feel that way now. ED is frustrating for both partners! But there are multiple ways to navigate this, and the absolute least helpful is to assume this means your partner will cheat based on zero evidence.

You say you have a marriage that you’ve fought hard for and put work into, which is exquisite. There is more work to do and more fighting to do. And it’s not with each other! This situation is absolutely not a you-versus-him problem. Or a him-versus-his-penis problem. It’s a you-and-him-versus-a-change-in-your-sex-life problem. You are on the same side here, and you must start acting like it. Think of all the fun, hot, new sex you’ll have once you get over the idea that this is about a lack of desire.