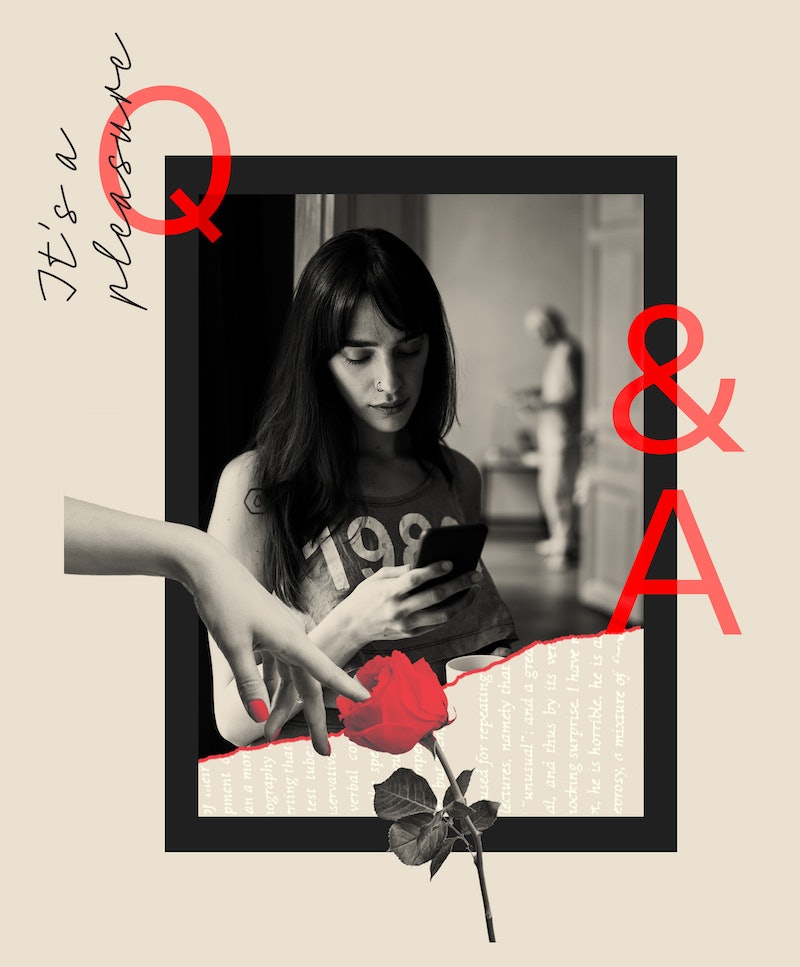 Q: I'm dating a guy; he's amazing, kind, passionate, understanding, goes out of his way to help people, and always prioritizes me. Sometimes, though, he can be insensitive and unaware of certain things, which is my only and biggest issue with him. The other major issue we have is his ex-girlfriend. When I met him, we were just friends and I was in a relationship. At some point, I started having issues in my relationship and I started getting close to him, and we started having sex. At this point, I knew we were not exclusive, but we were honest about other people he was seeing. (I wasn't seeing anyone else — my then-boyfriend had relocated and we broke up some months after.)

Then, I found out he was still having sex with his ex-girlfriend after he told me they were just friends and had broken up over a year ago. I was mad and hurt, because they were having sex without condoms and we agreed we would always use condoms if we had sex with other people. We resolved that and agreed that technically he wasn't cheating on me because we were not in a relationship. But he told me he would stop any sexual act with her, and even mentioned they've been trying to stop for a while. Some weeks after that, I caught them sexting, and he said they had a call after that and decided it would be the last time.

He told her he’d met someone and would love to get serious with the person and wanted to cut sexual relations between them. I believed him and there was evidence to prove that. But for some reason, I’m not comfortable with the fact that they communicate at all. They seem to not be able to stop speaking to each other. I've demanded he stop talking to her before, and he'll cut contact with her for a while. But she comes back with a call, text, or email stating how it hurts and that she'd rather be his friend than not be able to reach him at all. He usually obliges and starts taking her calls or texts when she reaches out.

Sometimes I give up and tell him to go ahead and speak with her, and not tell me about it, and sometimes I tell him to share every detail. He feels upset because he believes he has his emotions in check and that he’s not falling back with her. His evidence is that she wanted to get back together after they broke up and he said no, even before I came along. He’s always livid that I don’t take him at his word and trust and believe his actions. He says they're good friends and he never wants to lose the friendship or pretend to stop talking to her. He has tried to stop talking to her, and he says it's hard and it's easier for him to speak to her, without feeling anything.

I have stumbled on their chats sometimes, and it's always platonic. But I feel she's still into him and would accept him with open arms if he offered to go back. I'm worried about investing time into this relationship only to have him realize he wants her. He’s told me he hasn't given me any reasons to think such and truthfully, he hasn't. I just have this phobia and insecurity around it.

I think he’s an amazing guy and I wouldn't want to lose him over this. How do I let myself believe him and just trust him on this issue, because I trust him on everything else? Please can you help me navigate this?

A: It would be the pleasure of my life to help you navigate this! If I found out that you took what I’m about to write to heart and followed through with what I suggest, it would genuinely make my whole year. Because you, my friend, are in a terrible, terrible, terrible relationship, and helping you get out and end it would be a joy unlike any other.

While of course it is and has been your choice to be in this relationship and to stay in this relationship, that does not mean on any level that you are responsible for your partner’s horrendous, cruel treatment of you. He’s frankly awful, and I got that from a letter written by a person who loves him.

Let’s make like Maria von Trapp and start at the very beginning. You say, “He's amazing, kind, passionate, understanding, goes out of his way to help people, and always prioritizes me.” But then you wrote an entire letter where none of that is true. Not a single shred of evidence that he goes out of his way to help people, but maybe that’s because the letter is about you. OK, so what about the rest? He’s not amazing. Amazing people don’t lie or cheat like he is. He’s certainly not kind. He’s the opposite of understanding — he literally doesn’t get why you don’t want him talking to a person he’s cheated on you with multiple times. And most damning of all, based on your letter, he hasn’t prioritized you once. Is he passionate? Well, I have never seen someone so committed to treating their partner poorly, so I guess in some sense, that might be a passion. You say that his insensitivity is your only issue with him — a fault which is beyond sufficient to end a relationship — and then you write me an entire letter about how much he sucks to be with. My point is this: you can say that your boyfriend is “amazing” until you’re blue in the face but I don’t see any evidence of it. Let’s break down the ways this man is being cruel. Consider this list anytime you feel your resolve to walk away weakening.

I’m a little unclear as to the start of your relationship with one another — you make it seem like there was some overlap with other partners but I’m not sure what the boundaries were. I’m not here to be the decider of morality or anything, but I do think that when you start a relationship with a person who doesn’t care about boundaries (either in their relationship or yours), what you are going to get is a person who doesn’t care about boundaries. Of course, you played a part at the beginning of this relationship, too, and I think it’s worth it to ask yourself why you did what you did and how you would like to change in the future. But that’s advice for another day.

In the next paragraph, you say, “I found out he was still having sex with his ex-girlfriend after he told me they were just friends and had broken up over a year ago.” What on God’s green earth are you doing still dating this man? He outright lied to you. That’s a lie at the very least and some would say cheating. I don’t care if you’re exclusive with someone or not — it’s totally wonderful and healthy to have a non-exclusive arrangement with a hottie! We love that! But not if they lie to you! Lying is a deal-breaker, bar none. And then we find out he was having sex without condoms? After your explicit agreement (and basic decency and safety) dictated that he would use a condom with other partners? You could be forgiven — by me if not a jury — for removing the windows from his car with a baseball bat. (Don’t do that, it’s illegal and bad.) I don’t mean to override what you both agreed upon, but that’s cheating. You can choose to forgive him but that’s a major violation of the trust of your relationship.

They simply don’t want to stop talking to each other — and they won’t. They have no need to because you’re showing with your actions that you’re actually OK with it. Yes, I know you’ve gotten mad. I know you’ve demanded he stop but he doesn’t want to, so he doesn't and then you just… keep dating him. Let me be perfectly clear on a couple of things, too. He doesn’t want to be her friend. This man is unwilling to cut out a person he has cheated on you repeatedly with and lied to you about repeatedly because he still wants her sexual attention — that’s it. They’re not friends, they’re horny exes. They can have platonic talk until the cows come home and underneath all of it is the understanding, apparent to both of them, that they have had sex before and they will again should the chance arise. They’re both getting a little treat — unspoken sexual validation — each time they talk about seemingly innocuous things like how the Diamondbacks are doing or what their boss is mad about.

You shouldn’t worry that you’re investing time in this relationship only for him to realize he wants her back. You should worry that you’re spending your life with a person who has zero respect for you, who continually lies to you, has cheated repeatedly and has no interest in making your life better. You cannot let yourself believe him or trust him because he hasn’t done a single trustworthy thing. You have been begging him to be good to you and guess what? In an actually healthy relationship, you don’t have to ask the other person to be good. They want to treat you well. They don’t want to talk to their ex because they actually want to be with you. And even if they have a completely platonic friendship with their ex — which is certainly possible for some people! — they never make you doubt or question their commitment to you because they don’t cross boundaries. This man has shown you in approximately 4,018 ways that he has no respect for you, even if he maybe loves you in some weird, twisted, gaslight-y way.

“He’s always livid that I don’t take him at his word and trust and believe his actions.” You absolutely should trust and believe his actions. They are as follows: he lied, he cheated, he didn’t wear a condom with other partners, he won’t stop talking to the person he cheated on you with, he has been sexting her, he wants to keep being friends with a person who has been a problem in the relationship, and he’s making you believe your lack of faith in him is the problem. There’s no fixing a relationship like this. Please, believe his actions. Believe that he doesn’t care about your relationship. Believe that he wants to cheat on you. Trust that he is doing everything he can to bend the boundaries you two have. Trust that he will not prioritize you over the weak flirtation of this other woman. Trust him — and then do yourself the biggest favor of your life and leave him. I really hope he doesn’t have mysterious car trouble.

More like this
How Do I Deal With Both ED & Premature Ejaculation?
By Sophia Benoit
I Never Orgasm During Sex. What Can I Do?
By Sophia Benoit
7 Women Share Their Best Orgasm Stories
By Lexi Inks
Expert Tips For Being On Top When You're Plus-Size
By Lexi Inks
Get Even More From Bustle — Sign Up For The Newsletter