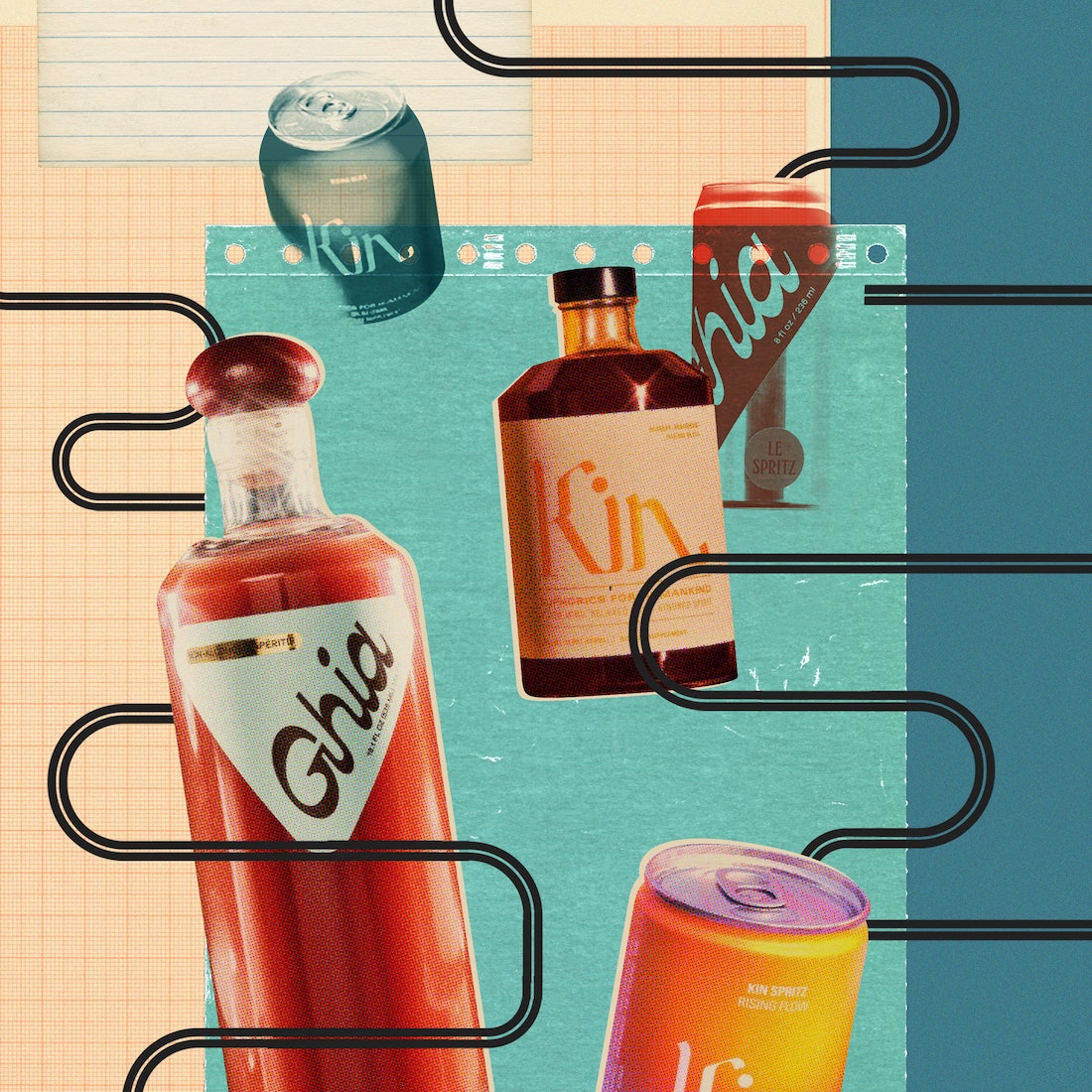 At Erewhon, a Los Angeles health food store so hip it doubles as a social scene, Sasami Ashworth, 30, strolls through the fancy beverage section with purpose. Her eyes flit between cans decked out in primary colors and vintage typography, looking to claim her next prize — a cold, sparkling nonalcoholic drink like De La Calle to sip on during breaks at the recording studio.

Never a regular drinker, but not actively sober, the musician says one of the hardest parts of her profession is that alcohol is "built into the social structure of my life.” But the rise of booze-free beverages like Ghia, Kin Euphorics, NON, Acid League, Seedlip, and more — for which as much attention is paid to taste as to aesthetics — allows Ashworth to feel like she doesn't have to drink alcohol for it to still be a party. With younger generations drinking significantly less than their predecessors, new nonalcoholic drinks are setting themselves apart from the pack of seltzers with indulgent, maximalist designs that offer a full-on sensory experience — suggesting that sobriety doesn’t have to be an exercise in deprivation.

Nicole Brunet, a Philadelphia-based field organizer, is like many millennials who’ve gone through different phases of not drinking. The first time the 27-year-old realized that sobriety wasn’t social exile was when she noticed people cracking open cans of La Croix at bars circa 2016. It was around this same time that the “sober curious” movement — where people ditched alcohol in order to live healthier lives, rather than because they struggled with substance use — took hold. A trend report published in 2020 noted that the nonalcoholic beverage market was valued at $919.3 billion in 2019, and is expected to grow to $1.257 trillion by 2027. Nearly 40% of people in a 2021 Bustle poll on sobriety self-identified as sober, straight-edge, or in recovery, while another 10% said they were “sober curious.”

Ghia, an herbal aperitif that you likely recognize from Instagram, was born out of this cultural shift. Growing up in the south of France, founder and CEO Mélanie Masarin was exposed to alcohol-enhanced socializing from a young age. But around 2015, Masarin decided to stop drinking after realizing how it affected her anxiety and digestive system. For her, the worst part about quitting was the nonstop judgment from others. “I felt like I was always being questioned for why I wasn't drinking as if I was an anomaly,” she says.

That frustration motivated Masarin to launch the brand in 2020. In designing the packaging, Masarin gravitated towards a positive and playful aesthetic that was “unapologetically maximalist,” taking cues from postmodern Italian design. “I really wanted to design a brand that was designed for the real world. As a result, you get to play with a lot more graphics and textures,” she explains. “We want people to feel like they're belonging.”

Ethel Moore, a graphic designer who adopted a more “sober lifestyle” during the pandemic, feels this strategy is effective.“I think one thing that Ghia does well is replicating the core experience that somebody wants when they're drinking,” the 29-year-old tells Bustle. “You want to have fun? Unboxing it is fun. You want to feel sexy? Putting flowers in a drink is sexy.”

In contrast to other design motifs that typify the millennial aesthetic — sans serif fonts on top of minimal, pastel palettes — Masarin wanted to build a brand that screamed louder than any bottle of alcohol ever could. For many companies in this category, breaking the stigma around not drinking means having no shame in being seen.

In crafting the brand identity for Kin Euphorics, founder Jen Batchelor wanted to make the consumer feel “very proud to be making this decision” to not drink, rather than waging a “war against alcohol,” she tells Bustle. Kin’s packaging mixes colorful palettes with nostalgic, new-agey font choices that evoke “living in a post-toxic world,” says Batchelor. The logo, reminiscent of Arabic calligraphy, is a nod to Batchelor’s Saudi Arabian heritage. The interplay of the K and I is also meant to suggest the scientific symbol for synapses, since the products use adaptogens, rather than alcohol, to effect a change in mood.

Then there are brands like Acid League, whose Wine Proxies, a rotating line of nonalcoholic beverages, are based on posca, an ancient Roman refreshment made out of water, vinegar, and herbs. A recent edition featured a ‘60s-inspired illustration by the artist Dreyfus on the label, while another captured a romantic, candlelit meal by Maggie Cowles. Acid League’s creative director Rae Drake points out that additional details, like wax on the spout of the bottle, remind customers that their products are all handcrafted.

“It’s almost a false truth in our society where people think to have fun, you have to drink alcohol,” says Louis Borelli, co-founder of No & Low, a curated online shop for “the world’s best non-alcoholic drinks.” “Taking away that stigma, it's gonna take time and work and effort. People are going to have to put a lot of energy into it.” Presentation, he notes, is a critical reflection of the effort that goes into making a 0% cocktail or aperitif; if a brand gets that wrong, consumers will judge or avoid it. Instead, this new generation of nonalcoholic drinks makes a particular effort to avoid sterility, both in taste and appearance, taking the “mock” out of mocktail. "You can see in the design and then the quality, [brands are] really putting the attention to detail in there," Borelli adds.

As someone who tries to drink mindfully, Drake is supportive of anyone “trying anything that takes away stigma and creates conversation.” If a product can help facilitate that connection through its design, she views it as a positive shift.

“Your sobriety doesn't need to be a talking point. It doesn't have to be the scarlet letter of the giant water cup,” says Ashworth. “I don't think there's anything wrong with people wanting to have fun without getting f*cked up.”