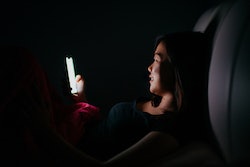 If it takes 10,000 hours of practice to become an expert, my expertise is in watching TikToks until 4 a.m. and waking up with a blue light hangover. Yes, I’ve set Screen Time limits; yes, I ignore them.

Now that I’m dabbling with the idea of leaving the house again, I decided to challenge myself to put some space between me and the phone I spent the pandemic spooning. I downloaded Opal, a screen time cop that doesn’t let you ignore its warnings. The app is #1 in the “digital wellbeing” section of the App Store; my interest was piqued upon reading a review where one user claimed to have finished a book for the first time in years thanks to the app.

Though the app costs a cool $60 a year, Opal claims they save people an average of two hours a day that they’d otherwise spend doomscrolling. As someone who scoffs at a $1.99 price tag on an app, I set two reminders to let me know when my week trial was over, so that I could cancel before getting charged. But at the end of the week, I didn’t want to end my subscription. For once, I felt protected from the distractions that keep me up at night.

When you download Opal, it asks you to set an intention, like, “get better sleep,” or “stop procrastinating.” Then, you set your preferences to block all internet, or just social media, videos, games, or NSFW stuff. You can also create a schedule, and Opal will cut the cord for you at pre-determined times (likes bedtime). Once activated, the only way to return to Scroll Town is to go into the Opal app, tap the time out button, and set an intention for your break (i.e., “I’m using Twitter for 10 minutes to check the news”). It gives you cute animated badges for not taking a break, which are oddly motivating.

I used Opal for a week with the intention of getting to bed earlier. Before putting on my pajamas each night, I’d turn Opal on for eight hours, and say goodbye to all social media and entertainment until the morning. While I knew I could go into the app and turn off its boundaries at any time, I never did. I came to look forward to the animated badges I’d get for letting it do its job once I woke up well-rested.

Did I actually sleep more? According to my Fitbit, most nights I fell asleep one to two hours earlier than usual. The app doesn’t have any control over apps like iMessage or Photos, so I learned pretty quickly how to entertain myself in the dark by texting friends late or scrolling through old photos, but this kind of distraction only goes so far. Unlike when I had access to TikTok and Instagram, I was much less likely to lose track of hours scrolling through pictures of my dog or texting with a night owl. Within four days, Opal became a crucial part of my night time routine.

Because I found it so useful at night, I started to use it during business hours around day five of the experiment. I have a terrible habit of sitting down to write, and then looking at my phone after every sentence. Instead of rewarding myself with a 45-minute Insta stroll in exchange for a few words, I tried turning Opal on as soon as I sat down at my computer. I’d still mindlessly pick up my phone and tap Instagram, but being greeted by a popup that read, “Instagram is offline. Tap here to set an intention to use it,” made me put my phone down — no desire to Insta snoop ever felt important enough to turn the app off. Even though I’d set Opal to block social media for 45 minutes, I’d end up getting over an hour of uninterrupted work done because after a dozen fruitless attempts to check my phone, I learned to stop picking it up.

Opal requires you to give it access to your phone and hand the power over to an entity stronger than you at resisting the allure of a three hour TikTok scroll. It locks your phone using a virtual private network (VPN), which acts as a middleman between the internet and your device. The VPN allows the app to take control of your time-sucking apps — anything from LinkedIn to Netflix — and turn them offline so that you can’t access them when you’re trying to work, sleep, or, like, be present. It’s almost like being on Airplane mode: You can open the app, but new content won’t load.

When I saw a VPN sign replace the 5G in my phone’s menu bar, I got nervous that the app was watching me a little too closely. But as it turns out, I didn’t have much to worry about. “Opal uses Apple's Local VPN technology which means it runs entirely and locally on your phone and none of your private browsing data leaves your device nor reaches any of our servers,” a spokesperson for the app explained over email.

Cybersecurity expert Kristina Podnar assured me that “your data is as safe as Apple’s trustworthy VPN.” She also flagged that Opal’s privacy policy says the app doesn’t keep track of any of your personal data, unless you opt in. But as someone who doesn’t like to give any apps any access to any data, I ultimately felt safe doing so with Opal.

Is Opal Worth It?

After just seven days, I’ve come to rely on Opal for managing my digital dependence. I’m looking forward to trying things like a Saturday without Instagram, or Slack-free evenings with the app’s assistance. And while I wish Opal had the power to turn my group chat offline too, I appreciate that it forces me to be intentional about picking up my phone. The extra sleep is great, but the wake up call is most valuable: I literally have to pay for a service to stop me from procrastinating. Hopefully by the time my annual subscription is up for renewal, I won’t actually need the app to police me — that would really make it worth the money.

More like this
5 Signs You Have A Toxic Relationship With Yourself
By Lexi Inks
Why We Love Investigating Friendship Breakups
By Carolyn Steber
10 Primal Movement Exercises That'll Improve Your Mobility
By Carolyn Steber
How Many Burpees Should You Do Per Day? Here’s What Fitness Trainers Say
By Carolyn Steber
Get Even More From Bustle — Sign Up For The Newsletter
From hair trends to relationship advice, our daily newsletter has everything you need to sound like a person who’s on TikTok, even if you aren’t.