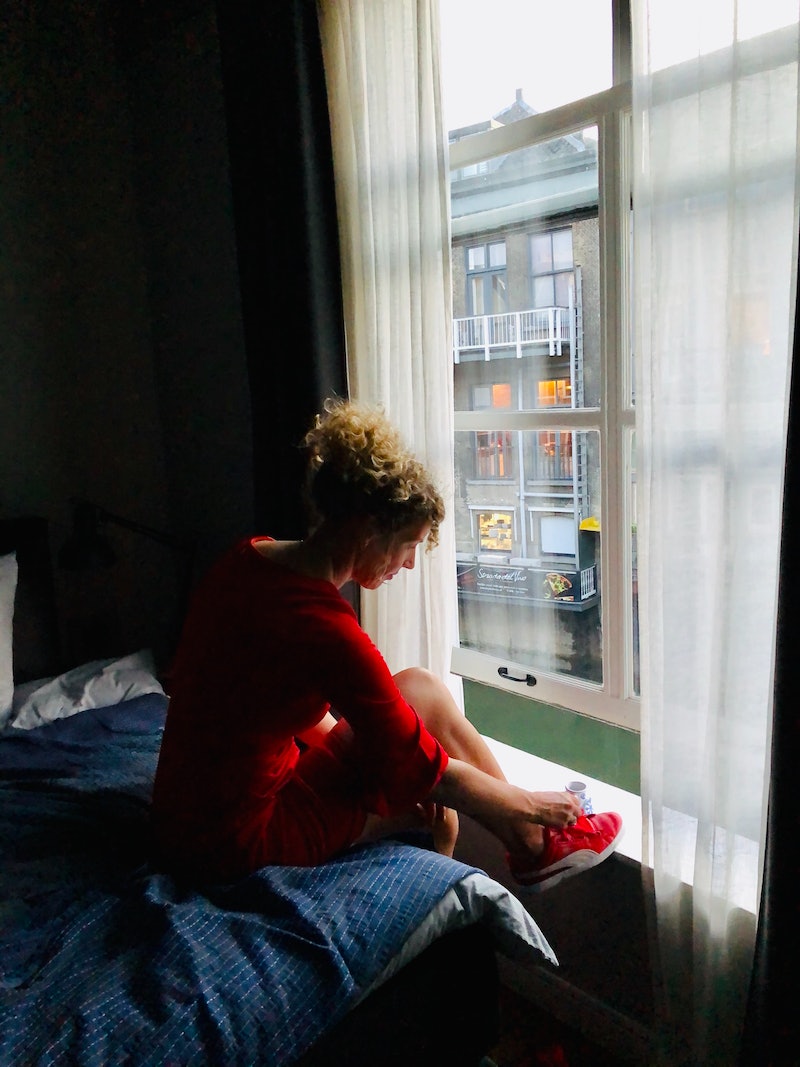 Kristen, 27, was in her idea of a perfect relationship. She and her partner had great chemistry and always looked forward to seeing each other. "When we were together, it was electric," she tells Bustle. There was just one problem: Kristen's boyfriend was married — and neither she nor his wife had any idea what was going on.

Sitting at home while your significant other sneaks around behind your back can be one of the worst kinds of betrayals. But we rarely hear about the person they're cheating with and the psychological effect of being the other partner — especially when, like Kristen, they don't know they're actively involved in an affair.

In situations like these, a cheating person often goes through great pains to make themselves seem single, even when they aren't. "I was dating a guy who was married," Caye, 42, tells Bustle. "I didn't know because he told me that he was divorced." She had no reason to believe he was lying — they had mutual friends in common and seemed to be building a life together. She'd even met his son and was forming a connection with him.

But the first time Caye was invited to meet the rest of her boyfriend's family, she immediately noticed how standoffish they seemed. "I didn't realize it was because I was the 'mistress,'" she says. It would be another year before the truth came out when her boyfriend accidentally referred to his ex-wife as his wife during an argument. "When I confronted him about his Freudian slip, he replied, 'Well, in my mind, we've been divorced for three years.'"

Now it's obvious that he had to go back home to his wife.

Caye says she was shocked to learn he'd been lying the entire year they were together. He'd also made a big show of talking about how "crazy" and "manipulative" his ex-wife was, and she felt bad for believing him. His motivation for talking poorly about her, in hindsight, made perfect sense — he was thinking ahead, and covering his tracks, in case his wife found out and tried to break them up. Consumed with guilt, Caye ended the relationship immediately, and then started worrying about the impression she'd made on his family.

This is a totally understandable response to finding out you're the other person. "You are likely to feel betrayed, to lose trust in your partner, to feel taken advantage of, and to go into a protective mode that, ironically, is like that of the partner who's been cheated on," Dr. Josh Klapow, a clinical psychologist, tells Bustle. "While the circumstance is not exactly the same, the emotional consequence has parallels." According a 2018 poll from the Institute for Family Studies (IFS), 13% of women and 20% of men have had sex with another person during their marriage — making affairs, and the ripple-effect of pain they create on both sides — fairly common.

Kristen, whose relationship also ended after a year, said being the other person in her boyfriend's affair left her confused and heartbroken, especially when she looked back and started connecting the dots. "It was soul-crushing," she says. "I always remember this one day in particular when he came over and spent a couple of hours at my house. We were cooking together, and we were drinking wine. I was so giddy, and everything felt so right, but then he abruptly left, and I was sitting there by myself. Now it's obvious that he had to go back home to his wife."

I was worried about his family thinking I was a home-wrecker.

While Klapow says it's often best to end these types of relationships the moment you figure what's going on, he says the feeling of loss and betrayal are authentic, and don't magically dissipate. The gut-wrenching aftermath of finding out you're the other person can follow you for years. "It's been over a decade," Caye says, "but I still get uneasy even traveling to the same state where he currently lives."

The guilt stems, too, from unwittingly contributing to stress in a family. "I try not to think about his wife," Kristen says. "It's a self-preservation thing.” And Caye agrees. "I was worried about his family thinking I was a home-wrecker. In addition to the mental and emotional fear and manipulation that I'd endured in the relationship, it was the final nail in the coffin."

More like this
35 Sexy Texts To Send Your Partner
By Griffin Wynne and Carolyn Steber
What Are Swingers? Everything You Need To Know
By Lexi Inks
8 Flirty Games To Play Over Text With Your Crush
By Lexi Inks
I'm 38 & Single. Why Can’t I Find A Serious Relationship?
By Sophia Benoit
Get Even More From Bustle — Sign Up For The Newsletter