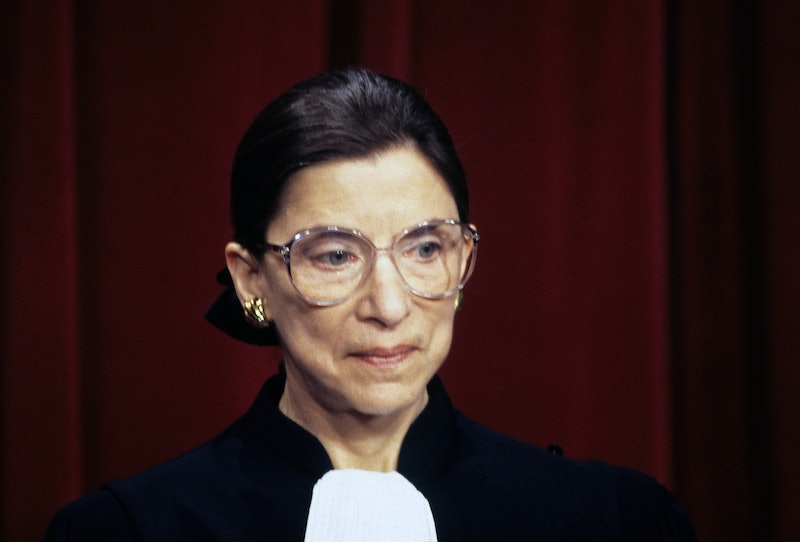 The passing of Justice Ruth Bader Ginsburg on Sept. 18 might have knocked the wind out of the nation, but Ginsburg's life's work will continue to inspire hope for years to come. Prior to joining the Supreme Court in 1993, she co-founded the ACLU’s Women’s Rights Project, an initiative devoted to gender equality. There, in 1972, she fought against an Air Force policy that automatically discharged pregnant officers unless they terminated their pregnancy, leading to the dissolution of the sexist rule. But Ginsburg saw the case as a referendum on reproductive rights, she told ELLE in 2014. "I so much wanted the first reproductive-freedom case to be one where the choice [the plaintiff was making] was for birth," Ginsburg said. "Roe v. Wade was as much about a doctor's right to practice his profession as about a woman's right."

As a Supreme Court Justice, Ginsburg's biggest decisions on reproductive rights established important precedents for future cases, and even when she was in the minority, her dissents gave crucial context for rulings to come. "She was so adept at weaving the abortion piece of it into the larger narrative about gender equality and women's autonomy and our right to make decisions about our lives writ large," Amy Hagstrom Miller, president and CEO of Whole Woman's Health, told ABC News.

With Ginsburg's death throwing the future of Roe. v. Wade into question, it's helpful to look back at six SCOTUS cases about reproductive rights where RBG made an enormous impact — a small fraction of her expansive legacy as the second woman to serve on the U.S. Supreme Court, and as a feminist in power.

Stenberg v. Carhart (2000) struck down a Nebraska law that had made performing "partial birth" abortions — a phrase that has no basis in medicine — illegal. The court decided that any law that imposed a burden on a woman’s right to choose to terminate a pregnancy was unconstitutional, and that any obstacle causing someone considering an abortion in Nebraska to fear prosecution, was an undue burden. It was a 5-4 decision. Ginsburg wrote, in concurrence, that the law didn’t have an exception to protect the life of the mother, making it unconstitutional.

Later, in Gonzales v. Carhart (2007), the same issue was confronted. A federal law had outlawed "partial birth" abortions. In this case, however, the law was upheld, also 5-4. Ginsburg dissented, noting, “The law saves not a single fetus from destruction, for it targets only a method of performing abortion.”

Ginsburg was known for her iconic dissents on cases like this, to make it clear that these kinds of laws masquerade as being protective of health, when in reality they make it more difficult for people to access essential healthcare. This in turn leads people who need abortions to resort to unsafe procedures, rather than change their decision.

When the Supreme Court ruled 5-4 to uphold Hobby Lobby's claim that they were exempt from the Affordable Care Act's mandate to provide insurance coverage of contraceptives under a provision for religious freedom, Ginsburg wrote a 35-page dissent.

In it, she wrote that contraception should be equally available to all, pointing out that the cost of an IUD is nearly equivalent to a month’s full-time pay for workers earning the minimum wage at Hobby Lobby. She also argued that these decisions could negatively impact workers who didn't share their employers' religious beliefs. Importantly, she warned that religious exemptions could be used too loosely in future rulings, as a way to limit reproductive rights. “The court, I fear, has ventured into a minefield," she wrote in her dissent, adding that if the court is going to accommodate one religion's views, it would then have to uphold all.

This case struck down the Texas’s Omnibus Abortion Bill, which required that abortion providers have admitting privileges at local hospitals, and that the clinics meet the same standards as outpatient surgical centers. These obstacles kept perfectly safe clinics and clinicians from providing much needed services.

Ginsburg voted against it, with the 5-3 majority, and filed a concurrent brief. “When a State severely limits access to safe and legal procedures, women in desperate circumstances may resort to unlicensed rogue practitioners...at great risk to their health and safety. So long as this Court adheres to Roe v. Wade and Planned Parenthood of Southeastern Pa. v. Casey, Targeted Regulation of Abortion Providers laws like [this] that do little or nothing for health, but rather strew impediments to abortion, cannot survive judicial inspection.”

In this case, Ginsburg helped to rule that a Louisiana state law that placed hospital-admission requirements on abortion clinicians, was unconstitutional. The 5-4 vote cited the 2016 Whole Woman's Health decision, saying that the laws were virtually the same. The Supreme Court reaffirmed that unnecessary restrictions on abortion providers have nothing to do with their ability to provide safe abortions, and everything to do with making it harder to perform them at all.

In a 7-2 ruling, the court found that it is legally acceptable for the Trump administration to issue rules that allow companies to refuse to provide contraceptive coverage under a religious or moral exemption. Ginsburg issued a dissent against the majority opinion, saying, "Today, for the first time, the Court casts totally aside countervailing rights and interests in its zeal to secure religious rights to the nth degree." She repeatedly cited the Hobby Lobby decision in her dissent.

While her dissent doesn't change the outcome of the case, it does help to create a more well-rounded view for future judges and lawyers who are on similar cases. The hope is that as similar cases are brought to trial, Ginsburg's advocacy for reproductive rights and gender equality will be imprinted on future legislators to come.

More like this
Watch Jacinda Arden’s Devastatingly Honest Resignation Speech
By Sam Ramsden
Eurovision Has Been Given A Whole New Look Ahead Of Its Liverpool Debut
By Bustle UK
90 Epic Truth Or Drink Questions To Play 'Say It Or Shot It' With
By Bustle UK
10 Primal Movement Exercises That'll Improve Your Mobility
By Carolyn Steber
Get Even More From Bustle — Sign Up For The Newsletter
From hair trends to relationship advice, our daily newsletter has everything you need to sound like a person who’s on TikTok, even if you aren’t.