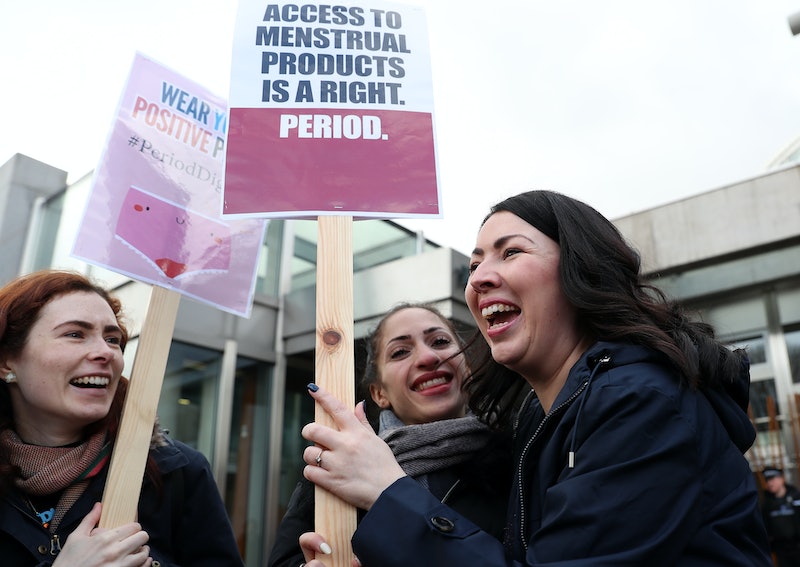 Following the tireless work of period poverty campaigners, Scotland has become the first country in the world to make period products free for all. On Tuesday, Nov. 24, Scottish MSPs voted unanimously in favour of new legalisation that will allow universal access to sanitary pads and tampons. The move has been hailed as a significant moment for gender equality.

The Period Products (Scotland) bill was introduced by Labour Health spokesperson Monica Lennon last year. Arriving just as the whole of the UK has seen a rise in period poverty due to the coronavirus pandemic, the new law will help ensure no person in Scotland will struggle to afford their basic sanitary needs.

Lennon, who has been working to end period poverty since 2016, said the new legislation was "practical and progressive."

"About. Bloody. Time, " she tweeted, following the news.

"Periods don't stop for pandemics and the work to improve access to essential tampons, pads and reusables has never been more important," said Lennon when she addressed MPs.

Per Sky News, she stated: "On the issue of period dignity, I am beyond proud that Scotland is leading the way and we have moved at a fast pace in a short space of time."

"We have got here because we have worked together. We have shown that this parliament can be a force for progressive change when we collaborate."

The landmark bill has been has been praised by both charities and ministers alike.

Charity leaders from Plan International UK said Scotland could "become the first country in the world to eliminate period poverty once and for all."

"In making this world-first commitment, the Scottish government has shown itself to be a pioneer in tackling period poverty, and we hope that nations around the world will follow its lead," said Rose Caldwell, chief executive of the charity Plan International UK to Sky News.

Scotland's Communities Secretary Aileen Campbell said the legislation will do much to "advance equality and social justice" in Scotland and believes other countries will seek to follow Scotland's path.

With one in ten girls in the UK said to be affected by period poverty, Scotland's new bill is a necessary step in the right directon.

Back in June, charities warned that lockdown had "exacerbated the issue" when it came to period poverty.

Though the UK government established a scheme in January to provide free period products in schools, people are struggled to gain access while they were closed.

As Bustle reported, national charity Bloody Good Period, which usually distributes 5,000 packs of sanitary products a month, saw that number swell to more than 23,000 amid the first lockdown in March. Since then, the charity has been supplying “almost six times as many menstrual products” across the country, per the Guardian. Leeds-based charity Freedom4Girls has “seen an even larger five-fold increase” in demand for sanitary products, rising from 500 to 7,500."