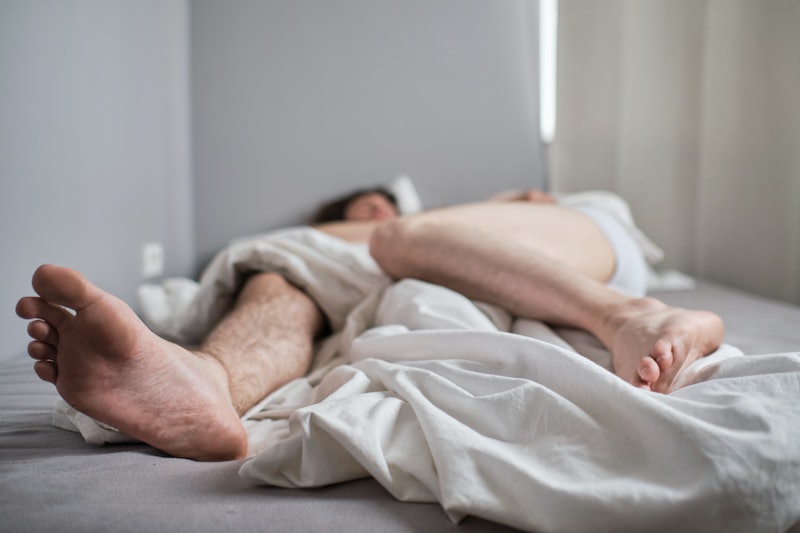 Katie,* 35, didn't have sex for almost five months. She'd given up online dating (her usual source for sexual partners) for Lent, then involuntarily extended it once COVID started, because she didn't feel safe kissing anyone. But the lack of intimacy got to be too hard, and she recently started going on dates again, with select new people. She’s also started seeing her long-term friend with benefits again, a polyamorous man in relationships with a few other people. But after such a prolonged period of unforseen celibacy, sex for the first time after lockdown felt daunting.

“At first, I didn’t want to risk any exposure at all, even with him,” Katie tells Bustle. “I saw him a little socially, but not intimately or for germ sharing.”

The first time they had sex, Katie felt like she was on a first date again. At one point, she had to stop and ask him to be “a little more in charge” because she “forgot what sex was like.” He complied by flipping her over and doing what she asked.

Katie is one of many single people slowly opening the door to dating and physical intimacy, nearly five months into the pandemic. Sarah,* 33, has Lupus, which puts her at high risk of contracting COVID. When she hit it off with a new guy in March, she had no idea that they'd soon be on lockdown, unable to see each other. In May, after months of sexting, they both strapped on their N95 masks and decided to go for a hike.

"We started just cuddling, strangely," Sarah tells Bustle. "We'd been waiting to have sex until we could feel comfortable doing it, but, in that moment, we were both too turned on."

Because they couldn't make out — and didn't have any lube or want to do anything that involved spit — they decided to have intercourse. They were right off a hiking trail, so they went around a nearby rock for a little bit of privacy.

They decided that doggy-style would be best, so that they wouldn't be face-to-face.

As an extra precaution, Sarah and her partner decided that doggy-style would be best, so that they wouldn't be face-to-face.

"We could have tried it the other way, but there wasn't really any place to do it," Sarah says. "He would have had to suspend me completely, and it was a really uncomfortable rock — it was kind of jagged. I didn't even realize that I had a cut on my leg until after I left, which goes to show just how much adrenaline was pumping during the whole situation."

Sarah says the strangest part of the whole encounter wasn't the masks, hand sanitizer, or the cliffside — it was not being able to kiss.

"I realized that kissing is to sex what daylight is to your Circadian rhythm, at least for me: You don't notice it until you're living in a submarine, and your sleep schedule is all messed up," Sarah says. "When you're not kissing, your body is turned on because you're attracted to it. But it's also confusing, like, 'What are we doing here?' It's like the signals to start are missing."

For Jake,* 31, the first time having sex since COVID started was compounded by the fact that he hadn't had sex in nearly a year. His divorce was finalized at the end of June, but the process started at the end of summer 2019. By the time it was finalized, the world was deep into the pandemic.

Jake’s first date was at an outdoor restaurant with a woman he met on Tinder. They hit it off right away and discussed social distancing in their daily lives. When it came to discussing the COVID precautions, they each were taking, “I think we’d given each other a very responsible vibe, so trust was kind of built up along the way,” Jake tells Bustle.

Jake then mentioned that he had air conditioning at his place. When she said she'd like to come over, he assumed it was just because Vermont was experiencing record-high temperatures.

“I didn’t necessarily anticipate the physicality,” Jake says. “I was kind of hoping, I’ll admit. But I was prepared to have her come over, stay socially distant, and close the door gently behind her as she left.”

The invite upstairs led to watching Netflix — on opposite sides of the couch. That is until his date inched over, and he pulled the classic one-arm-on-the-back-of-the-couch move. She cuddled right up, and he wondered, “Should I kiss her now?” He did, and things progressed from there.

"It was a bit like riding a bike, like 'Oh yeah, man!'” Jake says. "I had started to question myself and my sexual capacity, but being with a woman who was sexually experienced and vocal about what she was into meant I shifted gears pretty quickly into having a perfect time.”

From reconnecting with old lovers to sex with masks on over a cliffside, sex after lockdown is unquestionably weird. But would you expect anything less from 2020?

*names have been changed.