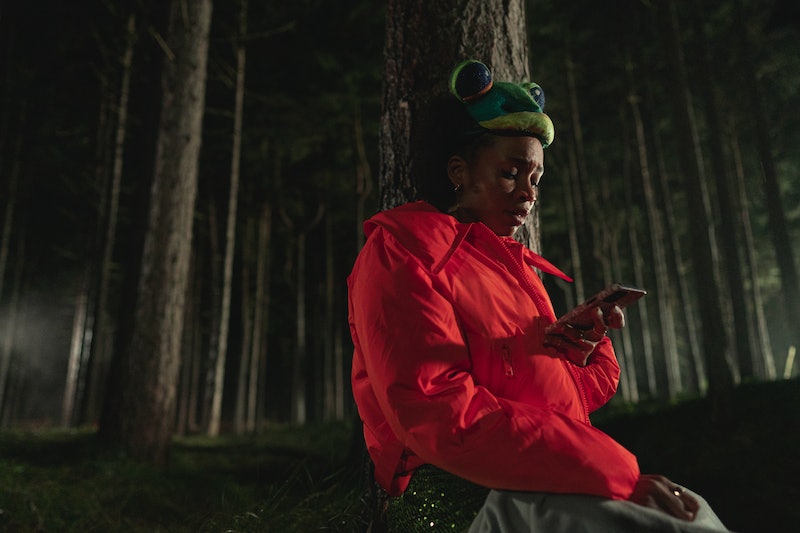 Last year, it was reported that at least 2,600 young people believed they had been spiked while on nights out since the start of the academic year in Sept. 2021. The alarming trend has been well documented and has sparked conversations about how to stay safe as lockdown lifts and we returns to bars and clubs.

One show, in particular, has reignited the conversation – again. Stay Close, based on the Harlan Coben novel of the same name, follows the case of a man who goes missing, and the various secrets and complexities that are revealed as the case is uncovered.

In one scene, we watch two girls in a club question whether a man they’ve been with has spiked their drinks. One of them, Bea, confirms this by dipping her finger (coated with nail polish) into the drink. As we watch, as it turns from fluorescent yellow to black.

The scene sparked a huge conversation on social media, with many young women asking whether such a product exists IRL.

“Nail polish that lets you know if your drink is spiked? A wonderful idea that could keep many people safe #StayClose,” one Twitter user wrote. While another said, “I’m watching #StayClose on Netflix and apparently they have nail polish in the UK that allows women to test if a man has spiked their drinks [mindblown emoji].”

While the idea is somewhat revolutionary and would possibly reduce the high rates of spiking, the product itself does not exist and remains entirely fictional.

This isn’t the first time the rumour of such a nail varnish has gone around. Two posts from the last year on Facebook claimed dipping your finger in a spiked drink would cause you nail polish to change colour, with one of the posts reaching almost 2K shares. Both are categorically untrue.

In 2014, there was a sudden rush of interest after a group of male university students proposed an idea for a nail varnish spiking detector to help their female friends. Despite receiving millions of dollars in investment, the product turned out to be unviable and was dropped. According to the company, Undercover Colours, “it failed consumer testing and it had too many limitations for us to be comfortable launching it”.

However, the company did roll out a replacement product called ‘SipChip’, which tests a drop of your drink and gives you the results. It claims to test for the most common drugs used for spiking, including roofies, xanax, and valium.

However, outside the nail- and chip-related world, another common way people can protect their drinks is by using a cup cover. Fashion retailer I SAW IT FIRST is giving away scrunchie-cup cover hybrids free with every order. And there are also companies such as StopTopps which provide bulk orders.

Another initiative trialled in Plymouth, Devon, and Cornwall, saw police roll out drink spiking test kits to bars and venues. However, the government has said that it has “no plans to introduce free drink testing kits,” saying it is up to individual businesses to privately source them. So, while the nail varnish in Stay Close seems a long distance off, with no other company reporting of having one in the works, there are other avenues to stay protected.

More like this
90 Epic Truth Or Drink Questions To Play 'Say It Or Shot It' With
By Bustle UK
How Many Burpees Should You Do Per Day? Here’s What Fitness Trainers Say
By Carolyn Steber
The 11 Benefits Of Aerial Yoga, According To Trainers
By Carolyn Steber
All The Reasons Your Gums Bleed When Brushing Your Teeth
By Carolyn Steber
Get The Very Best Of Bustle/UK
Sign up for Bustle UK's twice-weekly newsletter, featuring the latest must-watch TV, moving personal stories, and expert advice on the hottest viral buys.