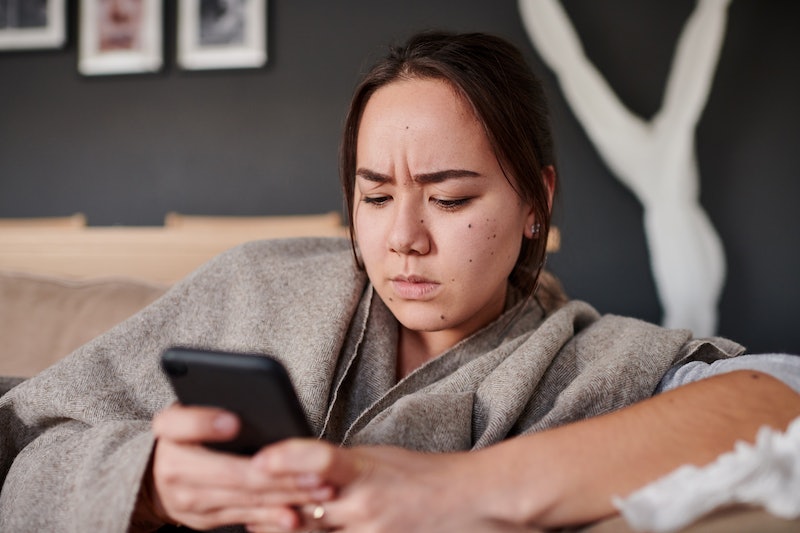 You’re still fuming from an argument, and while you don’t want to be anywhere near this person, you can’t stop picking up your phone and hovering over your text chain. You type something angsty and delete it. Then, the three dreaded dots — they type and delete something, too. You’re at a standoff, reeling from the dissatisfaction of the way things left off, but totally unsure of which route to take in the aftermath. Having ideas for texts to send after an argument already in hand can help you out of that type-and-delete rut.

According to therapist Caroline Given, L.C.S.W., it’s always better to wait before texting anything. ”Use the Notes app if you want to draft out any of those raw emotions, but definitely pause until you’re in a place where you’re calm enough to press send,” she tells Bustle. That said, there is a sweet spot, and waiting too long can be unfair to the person on the other end. “I’m an advocate of not letting anything wait for way too long, the best communication is current and transparent,” she adds.

The first text after an argument is an important one. It sets the stage for what’s to come next. If your objective is to rehabilitate the relationship and smooth things over, you’ll want to chose your words thoughtfully. Tone is hard to read over text, so firing off a bunch of heated thoughts when you’re still stuck in the drama likely won’t go over well, even if you’re totally justified.

Here are eight ideas for texts to send someone after an argument, and have the kind of conversation that’s in line with your goal.

1. When You Feel Bad About What You Said

“I want to apologize for what I said/did (insert the specific actions or behavior). I thought about how it must have hurt you and I really regret my behavior. Let me know what I can do to make this right with you.”

If you feel remorseful about the way you handled yourself in an argument, Given says step one is to swallow your pride. Then, you can get yourself into a place mentally where you can deliver a genuine apology that “places the emphasis on the behavior that you regret without using the word, without giving excuses for what you did,” she says. Given adds that it’s good to close with a request to make amends to ensure your intentions are laid out.

2. When You Don’t Feel Heard

“I reflected on what happened and I didn’t feel that you really understood my view on the situation. We don’t have to agree on everything but it’s important to me that my perspective is heard and validated. Do you think we could find some time to talk about it?”

If you don’t feel resolved after an argument because your feelings were not acknowledged, Given says it’s OK to request some more time to talk, but to remember that your goal should never be “to win or to persuade someone to fully agree with your view.” Rather, it should be chatting more so that both parties feel their perspective is “understood and validated even if they’re unable to agree with the other person’s perspective.” Keep in mind though, that you should be prepared to agree to disagree, since validation doesn’t mean approval.

3. When You Said Something Nasty

“I’ve been thinking about on what happened and I realized that what I said was offensive. I wanted to let you know for the future that I will be more cognizant of my words and behavior. I never want to hurt you or be insensitive to your feelings."

Regardless of how you feel after an argument, if you recognize that you were offensive, Given says it’s good practice to own up to it. You don’t even have to make up or address the specifics of the fight if you’re not ready, but still take a minute to let that person know that you want to handle the situation maturely and ethically, without being intentionally hurtful.

4. When You’re Not Ready To Make Nice

“I put some thought into what happened and I don’t feel that I’m in a place yet where we could have a productive conversation for how to move forward. I will reach out in (insert amount of time) to let you know if I’m ready to make amends or I still need more time.”

If you’re still feeling salty, Given says that’s your right, but you should be upfront about where you’re at. “Communicate that you need more time, instead of stewing in passive-aggressive silence,” she says.

“I just wanted to let you that I feel deeply hurt. When you took (insert action), I felt (insert specific emotion word). I don’t think I can move forward until this acknowledged and I receive an apology or amends.”

You can’t control what other people do or say, and while you can demand an apology, you might not get it. Given says that the best way to deal with residual pain from a fight is to express yourself, with the goal of only having your perspective validated and understood even if that person doesn’t agree with it.

6. When You Have More Fight In You

“While I don’t want to increase tension between us further, there was an important point that I didn’t feel was acknowledged when we had our disagreement. (Insert point and explain why it is important and relevant to the relationship.)”

Sometimes the fight isn’t over, and continuing to add fuel to the fire is necessary to move forward. That said, there’s a way to keep the conversation going without intensifying the discord. “You want to reiterate that you’re not trying to enflame the conflict but you still feel that there was an essential piece that was missing,” Given says. She adds that it’s important to “explain why you think it is relevant and worth remarking on” in a clear and calm fashion.

7. When You Want To Make Up

“I hate that we had a conflict that made us feel less close to each other. Could we figure out some time to talk things out and see how I can make amends for anything that I specifically did that hurt you? Our relationship really matters to me.”

Even if you know you want to make up, it can feel awkward or scary to send a repair attempt. “When opening up the conversation to make up after a fight, we always want to apologize for our part while also giving the other person an opportunity to voice their view on the situation and how they would like amends to be made,” Given says. Letting that person know what they mean to you is a good tone to set for a productive conversation, and though it might feel like a given, people are often appreciative of such acknowledgements.

8. When You Realize You Overreacted

“Once I cooled off, I reflected on what happened and I recognize now that I overreacted. I’m sorry that you were on the receiving end of that and I’ll work on regulating my emotions and communicating better with you in the future. Let me know if there’s anything I can do to make it up to you.”

In the moment, you felt really righteous. But then when you settled down a bit, gave the situation some air, you started to realize that perhaps you were a bit extra. Maybe there was something going on in your world that bled into the interaction with someone else, unfairly. Instead of trying to defend your initial reaction, Given says to humble yourself and be honest about that.

More like this
5 Signs You Have A Toxic Relationship With Yourself
By Lexi Inks
Why We Love Investigating Friendship Breakups
By Carolyn Steber
Why Being “Too Sensitive” In Relationships Is A Good Thing
By Lexi Inks
10 Texts That'll Help You Reconnect With An Ex-Best Friend
By Lexi Inks
Get Even More From Bustle — Sign Up For The Newsletter
From hair trends to relationship advice, our daily newsletter has everything you need to sound like a person who’s on TikTok, even if you aren’t.