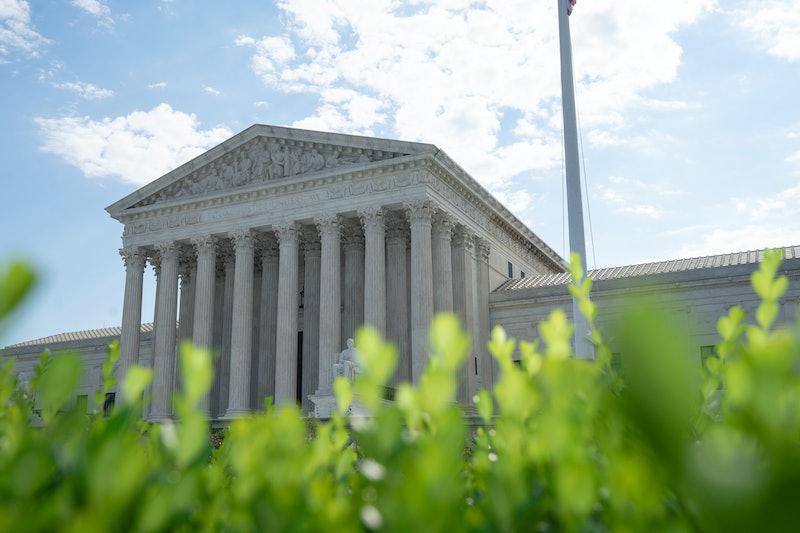 On June 15, the U.S. Supreme Court ruled that the 1964 Civil Rights Act protects LGBTQ employees from discrimination based on sex. This means that it’s now illegal to harass or fire someone for being gay or trans. Just last year, Allilsa Fernandez, 36, a hospital peer specialist who uses “any and all” pronouns, chose to leave a job where they faced discrimination on the basis of her gender identity, especially knowing no legal recourse was available to him. Here, Fernandez tells Bustle about what it’s like to know they have recourse against that discrimination should it ever happen again.

When I started an internship last year, I was given a sheet of paper about what clothing was appropriate for the job. It said, “This is how males dress: A suit, a tie. This is what females wear: A skirt, heels that are not too high.” We had a whole meeting about the dress code — about what clothes you can wear, what they should look like, even the kinds of materials they can be made from.

I thought, “What does this mean for a person like me?” I had packed up my life, moved to Maryland from New York, gotten an apartment — all for this job. It was scary. I took a few minutes to process and then told HR, “I don’t fit into these categories. I can’t wear suits and I definitely can’t wear dresses and skirts. I wouldn’t feel comfortable. This is not who I am and does not represent who I am.”

The lady was shocked. She said, “Oh, well we’ve never had anyone like you here.” She told me she was going to speak to the CEO, but didn’t see why I wouldn’t have to follow the guidelines. It felt like there was this question of if I was appropriate, if I even belonged. It was very upsetting.

It took a day for them to get back to me. The CEO ultimately said that it was fine for me to dress outside of the very specific dress code, to accommodate my gender. But I couldn’t understand that it could take a whole day to say to someone, “We’ve had a discussion and it’s OK for you to be who you are.” Even the idea of the dress code raised a lot of questions for me about my identity and who I was in that room.

It wasn’t about what clothes to wear, but whether I was allowed to be myself. It’s the same problem I faced when it came to my pronouns at work, and why I ultimately ended up having to leave this job three weeks after the dress code issue was settled.

I tell people I go by any and all pronouns, and I like them to all be used interchangeably. But when people only say “she,” it really bothers me. I raised this concern in a meeting. And the president said, “Well, the thing is, donors may not like that and then we won’t get the support we need, so I think it’s better if we don’t do that. We’re welcoming of gay people here! But we just don’t need to say those things.”

After some more back and forth where I asked that my pronouns be respected, the president emailed me with a compromise: instead of asking everyone in the organization to go around and say their pronouns, we could have a company-wide meeting where people could share any kind of fact about themselves. Like I could say, “I’m Allilsa and I have allergies.” And someone else could say, “I’m David and I’m gay and these are my pronouns.”

And so I left. As trans and gender non-conforming people, we are always having to make a way for ourselves and say, “We are welcomed!” versus just being welcomed. I wish people could just be inclusive, versus us having to demand it all the time. It started with the clothes, but then there were countless other incidents that let me know I was not welcome there. My pronouns were the final thing. I was not accepted at all for who I was there. Nothing they had done was illegal, so I couldn’t file a harassment claim and I knew it. This wasn’t the law then.

For the longest time, we just had to take it. We had to take abuse — because this is abuse — with no repercussions and nothing could happen to those who were doing it. We can hold those people who wrong us accountable. We have a voice. We do belong.

More like this
Gen Z Are Twice As Likely To Identify As Queer, According To New Data
By Sam Ramsden
25 Inspiring Quotes From Black Women To Celebrate Black History Month
By Kyli Rodriguez-Cayro and JR Thorpe
"Lavender Haze" Star Laith Ashley Breaks Down Filming With Taylor Swift
By Jake Viswanath
Ozzie’s Coming Out Scene With Kitty On 'That ’90s Show' Has Twitter Sobbing
By Brad Witter
Get Even More From Bustle — Sign Up For The Newsletter
From hair trends to relationship advice, our daily newsletter has everything you need to sound like a person who’s on TikTok, even if you aren’t.