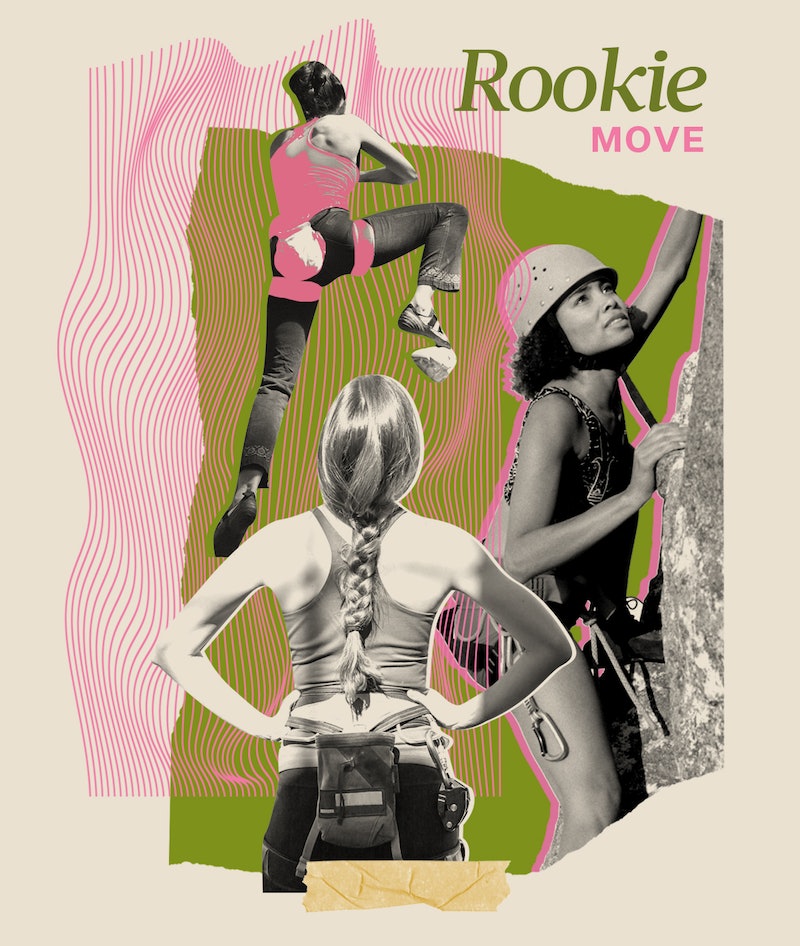 When you’re new to a fitness activity, one question looms large: What if you totally embarrass yourself?! In Rookie Move, experts give their best advice — because if you know, you know (and now, you do).

So you want to try climbing. You’re not the only one: Industry data predicts that 2021 will be another growth year for climbing gyms across the country, with 61 new gyms slated to open. And they’d better open soon, because the addition of climbing to the 2021 Summer Olympics — including bouldering, lead climbing, and speed climbing — is bound to attract more newcomers to the sport.

Bustle spoke with Dan Braun, Brooklyn Boulders' national product manager and general manager in the Boston location, who gave us his best tips for the climbing-curious. Here’s how to avoid the mistakes Braun sees newbies make too often, and how to instead arrive at the gym as a first-timer with confidence.

You show up in really short shorts.

Honestly, use your common sense, and whatever you wear will be fine, says Braun. “It’s pretty easy to show up and be wearing the right thing at a climbing gym,” he tells Bustle. “You’re not going to get laughed at for any particular thing — unless you show up and you’re trying to climb in a skirt or dress pants or something like that.”

That said, while there’s nothing wrong with wearing shorts to climb indoors — plenty of people do — some seasoned climbers recommend athletic pants or leggings instead, for a couple of good reasons. “As a new climber, you might bump your knees on the wall,” Braun says. “It might be more comfortable to have pants on.” (Most gyms will be air-conditioned, so pants all year round shouldn’t be an issue.)

Also, if you care about such things, there is an aesthetic factor at play here, too, though this only applies to top-roping. (Top-roping is the one where you’re attached to a secure anchor system; bouldering is the one where you just jump on the wall and go for it.) With top-roping, you’ll be wearing a harness, which can bunch up your shorts and lead to “that coveted diaper-butt look,” as climber Alison Kaplan has phrased it. “If you do want to wear shorts,” she notes, “consider wearing longer shorts or shorts with spandex under them.”

Other than that, you don’t need to wear or bring anything special. You’ll need shoes and a chalk bag — and a harness if you’re top-roping — but any climbing gym will have these available for first-timers to rent.

You rely more on strength than skill.

It’s common for new climbers to rely heavily on strength, whether they’re bouldering or top-roping. “They’re basically just trying to do pull-ups all the way up the wall,” Braun says. You do need strength to be a good climber, but in the beginning, it’s smarter to focus more on building good technique. “A lot of climbers make that mistake early on,” Braun says, “and then they get stuck in this rut of thinking that climbing is really, really hard, and it destroys your forearms.”

“It doesn’t have to be a feat of strength.”

To avoid this mode of thinking, Braun recommends that total newbies take an intro to climbing class. “If you learn some basic climbing techniques from an experienced instructor, you’ll learn body positioning and form, and how that is going to be an effective tool in getting up the wall with less effort,” he tells Bustle. “It doesn’t have to be a feat of strength.”

You assume bouldering is easier than top-roping.

Many newcomers to a climbing gym gravitate toward bouldering, and it makes sense: The walls are shorter than the top-roping walls, there’s less equipment involved, and there’s no need to bother finding a partner or learning how to belay. (Belaying is the term for operating the top-roping anchor system, to ensure your partner is securely attached and doesn’t fall.) Bouldering seems easier than top-roping, but it isn’t, Braun said. “It’s simply just harder! It’s harder than rope climbing,” TK said. Compared to bouldering, rope climbing is more about endurance than strength or skill — the walls are not as steep and the holds are easier to grasp onto.

You just need two things to get started rope climbing: a belay certification and a partner, both of which you can get by taking an intro to climbing class. “I see people come in and they’ll take an intro class together, and it’s like, bam — they hit it off, and they just keep coming in together, and then they make more friends that way, too,” Braun said.

You’re off in your own little world.

Climbing can be a moving meditation: The world fades away, and all that matters is how the hell you’re going to solidly hook your right hand onto that slippery hold. Be sure, though, that you’re still staying aware of the other climbers around you, Braun warns. Don’t walk underneath another climber — you don’t want them to fall on you! — and try to check out your route before you hop onto the wall, so you don’t end up bumping elbows with another climber (the easiest way for a newbie to annoy a more experienced climber).

You can keep to yourself if you want, but if you’re open to it, try some chitchat. “It’s a very open, welcoming environment — it’s very normal to strike up a conversation with your neighbor,” Braun says. If you see someone complete a bouldering problem that’s been eluding you all morning, for instance, it’s not weird at all to just ask them how they did it.

That said, don’t offer information — climbers call it beta — unless someone asks for it. “It can kind of rub people the wrong way if they get unsolicited information,” Braun explains. “Rock climbing is a lot like solving a puzzle — it’s a big, physical puzzle.” Part of the fun is figuring it out for yourself, so keep the spoilers to yourself, please.

*All of that said, the most important thing to remember as a newbie is to show up with a good attitude. Your attitude is the biggest predictor of how much you’ll enjoy yourself. “Climbing can be a little bit intimidating, so when you show up, you just want to approach it with an open mind and a light attitude, and really just try to have a lot of fun,” says Braun. “I’ve noticed the people who come in with just no expectations tend to have an absolute blast.”