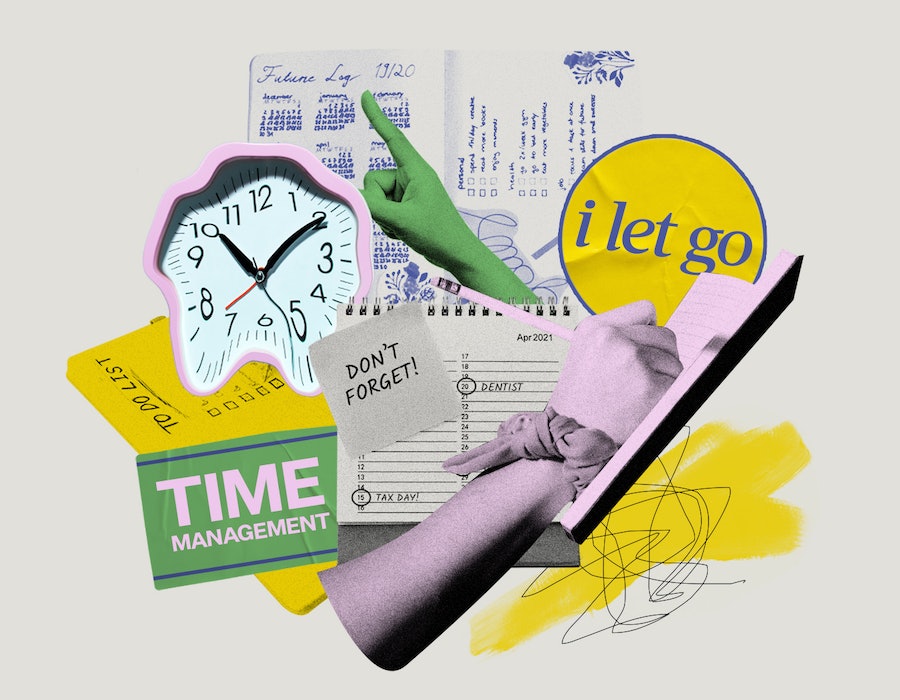 If you’d asked 20-something me to describe the secret to a fulfilling life, I’d doubtless have parroted all the right answers: strong relationships and meaningful work, plenty of sleep and exercise, plus time spent in nature, maybe a regular mindfulness practice. But a hidden camera in my apartment would have revealed what I really thought the answer was: timetables and schedules, color-coded to-do lists and daily routines and weekly goals, all drawn up in fancy hardcover journals using overpriced felt-tip pens.

But no matter how many different time management systems I tried — dividing my activities into A, B, and C priorities, carving up the workday into 25-minute Pomodoros or two-hour focus blocks — none of it ever quite seemed to work. I often felt as though I were on the cusp of organizational perfection — almost in control, almost on top of everything, almost in a position to deal effortlessly with whatever demand might come my way. But then an imminent deadline or an unexpected motivational slump would throw me off track, and I’d once again be obliged to concede that my latest productivity system wasn’t The One.

Once I’d achieved this longed-for state of Having My Life Sorted Out, or so I apparently believed, I’d be so efficient at dealing with to-do’s that I would never again feel insecure about my work performance. Plus, I’d be so calmly in command of my future that I would be able to face the big decisions of adulthood — about marriage, children, and more — without the panicky sense that I didn’t have a clue what I was doing.

I remember sitting on a bench in Brooklyn’s Prospect Park one winter morning, feeling even more overwhelmed than usual by the tasks ahead of me that day and wondering what ingenious scheduling trick I might deploy in order to pull them all off, when I was suddenly struck by the thought that none of this was ever going to work. I was never going to find the time management technique that would get me to the state of finally having my life in working order, nor the limitless reserves of self-discipline that such methods always seemed to require.

Surprisingly, I found myself exhaling in relief. The reason my schedules and goal lists never got me there was that nobody ever gets there. That kind of mastery over time just isn’t something we humans get to experience. We are finite creatures, facing an effectively infinite supply of potential experiences to have, people to date, obligations to fulfill, career paths to explore, emails to answer — so of course no productivity approach can provide us with a way to handle them all.

As for those terrifying decisions of adulthood? For almost all of us, the fear is a nonnegotiable part of the package. You don’t ever really know what the hell you’re doing — and you must choose your path anyway.

Actually leaving my productivity geekhood behind was a much more gradual process. Indeed, if I’m honest, it’s one that continues to this day. (Show me a well-designed clothbound planner, or a sleek new timeboxing app, and see me tremble with desire.) But that park bench epiphany gave me a new understanding of what my time management obsession had been about, psychologically speaking. I had been using it to cling to the fantasy that I might one day achieve sufficient mastery over my time so that life would no longer feel scary.

The therapist Bruce Tift argues that much of life’s suffering stems from the struggle to avoid “consciously participat[ing] in what it’s like to feel claustrophobic, imprisoned, powerless, and constrained by reality.” We desperately wish that human existence weren’t the limiting, uncertain, imperfect, and emotionally distressing experience that it is. So we try to devise psychological escape routes from the truth.

In hindsight, my productivity geekhood was a textbook example: a way to try to feel that the universal human predicament didn’t have to apply to me. You’ll still find me drawing up to-do lists and time-blocking schedules now and then, but in a completely different spirit: just because they can be a useful way to bring organization to the day, rather than as part of some futile quest to escape the inescapable vulnerability of being alive.

There’s a saying popular in Alcoholics Anonymous to the effect that all that’s ever required of you is to “do the next right thing.” It’s intended as advice for navigating a crisis. But in fact it’s all that any of us can ever do. And it’s an especially useful reminder for those of us prone to obsessing over our plans and to-do lists: You can make all the schedules you like — but all you can ever hope to control, and thus all you ever really need to worry about, is the very next action you take.