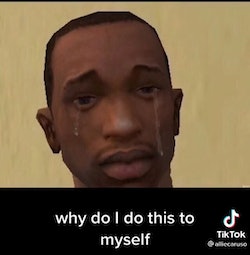 As many of us can admit, scrolling through TikTok has become a prime way to pass time, whether it serves as a welcome distraction while you’re working from home or a source of hilarious memes to send to your friends. If you can relate, you have probably noticed a slew of videos using screenshots of text messages or Instagram DMs and stills of Carl Johnson, a “Grand Theft Auto: San Andreas” character, set to a series of dramatic sounds. Many of these TikToks open with “got a text from my ex...” before the ominous sounds kick in as the poster decides whether or not to engage with their former boo. With over 92,000 videos already made using the popular sound, it’s safe to say this hilarious trend has gone viral — so how exactly did it come about?

Where Did The Sound Come From?

The sound was originally used in a video posted on Nov. 16, 2021 by TikTok user lexxandrine. In the TikTok, she shows screenshots of a Snapchat conversation with her crush, where he takes a while to respond, so she uses pictures of different emoji faces to help narrate her thoughts while waiting for him to reply. The video gained 1.3 million likes, and the sound’s popularity quickly took off from there. Because it’s the internet, there isn’t much information about where the sound came from prior to being used on TikTok, but it’s certainly been put to use by some funny creators.

What Is The “Grand Theft Auto” Toxic Ex Trend?

Among the videos created using this sound, there are several popular trends. One of the most viewed involves women telling stories of how they gave in after their ex (often toxic ex) reached out to them.

In these videos, the creators share screenshots of unexpected text messages or DMs they receive from their exes, and in between each they use a still of different facial expressions made by the character Carl Johnson in the video game “Grand Theft Auto: San Andreas.” There are pictures of Carl crying, looking surprised, etc. They include text on the screen along with the pictures of Carl to explain their reaction to each text or DM response they get from their ex.

In some of these videos, the video creator’s toxic ex reaches out to them after seeing a thirst trap or selfie they posted.

In similar versions, the video creator (like user al.caruso below) reaches out to the ex themselves.

Other TikTok creators are using the trend to tell stories about skipping school and getting caught by their parents, lying to their strict parents about where they were, or typos their partners made via text that almost got them into trouble.

How To Make A TikTok Using The “Grand Theft Auto” Trend

If you’re looking to make your own video using the “Grand Theft Auto: San Andreas” trend, you’ll need to have the pictures of Carl Johnson saved on your phone. To do that, you can either download them from Google or screenshot their cropped versions from a TikTok (user way2sexylexi provided one here). You’ll also want to take screenshots of any text messages or DMs you’d like to include. Pro-tip: Follow the lead of others who have done this trend and hold down each message as if you were going to “react” to it, so that the other messages in the thread are blurred out and the one you want viewers to read is front and center.

Once you have all the screenshots you need, you can upload them using the TikTok video editor and choose the original sound by user lexxandrine. Add your text captions onto each picture using the editor, and voila! You’ve joined the ranks of the creators inspiring tons of likes and laughs using this trend.

More like this
How To Know If You’re A Hopeless Romantic Or A Hopeful Romantic
By Jessica Estrada
Should I Break Off My 4-Year Relationship For A Woman I Just Met?
By Sophia Benoit
How To Get Over Someone, According To Experts
By Brittany Leitner
How To Let Go Of Someone You Love, According To Experts
By Madeline Howard
Get Even More From Bustle — Sign Up For The Newsletter