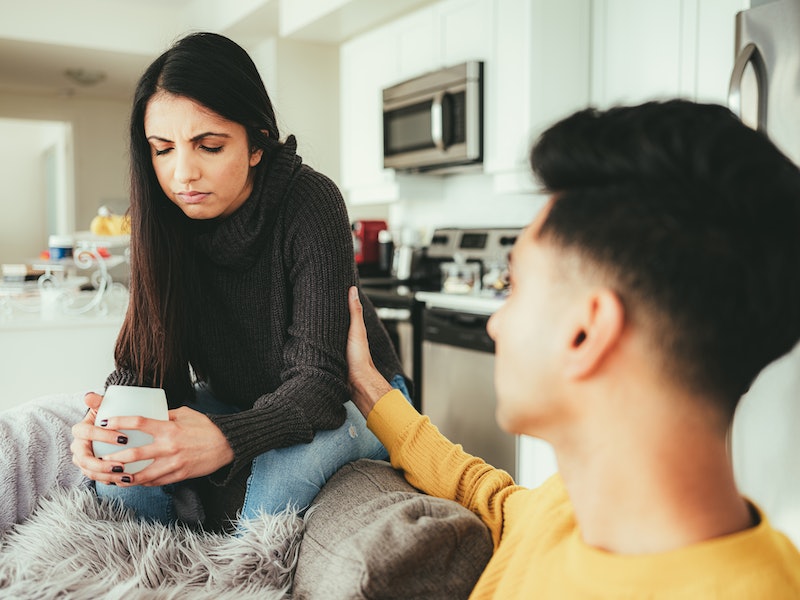 Dylan, 37, was certain her husband was cheating. He had a habit of staying out late, and whenever she called, he never answered his phone — all major red flags. So, one night, she drove by his friend's house, where he was supposedly hanging out, only to see it was pitch black. It prompted her to ask what was going on, and he finally admitted to having one-night stands, leaving her with the difficult task of deciding whether it's actually possible to trust a partner again after cheating.

They tried to work it out, went to counseling, but Dylan ultimately realized she couldn't trust him again as a partner. "We eventually divorced, and now, 10 years later, I can finally trust him again," she tells Bustle. "Now we're friends and give each other advice. But I would never be in a relationship with him again."

Experts say this goes to show there is no one-size-fits-all answer when it comes to re-establishing trust after cheating. "Because each individual and each relationship is unique, there are so many factors," Dr. Alisa Ruby Bash, Psy.D., LMFT, a licensed marriage and family therapist, tells Bustle. "The process to recovery is going to require tremendous insight, willingness to open one's mind, most likely therapy, and infinite amounts of honest communication."

Sometimes that means amicably breaking up and staying friends, but that certainly isn't the only option. When Laura, 31, found out her partner had been cheating, it came at a time when she was struggling with depression. She was already feeling really low when — instead of offering support — her partner fell in love with somebody else. "It was the worst possible betrayal at a time of vulnerability for me," she tells Bustle. "He said that he loved the other person. That she was his 'soulmate.'"

"It’s taken a long time, but we are stronger for it."

Laura left the home they shared and went to stay with her brother to continue working on herself. She also spent a month considering whether or not she wanted to give her partner a second chance. "I didn’t want to throw years away so easily, although I had gotten to a place by then where it would have been OK for me to end it completely," she says.

Finally, Laura decided she'd come back on one condition: that she was allowed to ask for reassurance whenever she needed to, like when she woke up from a bad dream or needed to know where her partner was going at night. According to experts, that's one of the best ways to rebuild a relationship and establish trust again. "There has to be complete transparency moving forward about everything — where you are, who you’re with, what you’re doing," Lesli Doares, MS, LMFT, a licensed marriage and family therapist, tells Bustle.

For Laura and her partner, all their hard work paid off. "I do trust him implicitly again," she says. "His reparative efforts have helped heal the deep wounds. It’s taken a long time, but we are stronger for it. What a cliche! But it’s true. I learned to trust again, but it took both of us to make it work."

"You're the first person I've never cheated on."

There were no reparative efforts made between Adele, 35, and her partner, whom she discovered had cheated while abroad for a wedding. "I never called them on it because I figured it was a one-time thing," she tells Bustle. "I chose to trust them." But the pattern of infidelity continued.

"I remember all of the nights my partner claimed they were playing basketball (our building had a shared court), but when I went downstairs to walk our dog, they weren't there," Adele says. "Then there were several nights they told me their phone was dying so they wouldn't be reachable and that they'd be home late."

Adele says that a few months into their relationship, her partner had said, "'I just want you to know, you're the first person I've never cheated on,'" which brought to mind the old saying, "once a cheater, always a cheater." She and her partner are no longer together and no longer speak because, in their case, the old adage rings true.

"If the partner who cheated has a history of continuously cheating, the trust will be broken," Bash says. "In those situations, it might be best to explore if you both are suited for monogamy or for each other. Instead of trying to make a square peg fit into a round hole, it might be best to change the boundaries of your relationship or simply break up."

More like this
TikTok's Voluntary Celibacy Trend Has Sparked A Movement
By Lexi Inks
Why Being “Too Sensitive” In Relationships Is A Good Thing
By Lexi Inks
5 Signs You Have A Toxic Relationship With Yourself
By Lexi Inks
How Ovulation Affects Your Sense Of Smell, Libido, & More
By JR Thorpe and Lexi Inks
Get Even More From Bustle — Sign Up For The Newsletter
From hair trends to relationship advice, our daily newsletter has everything you need to sound like a person who’s on TikTok, even if you aren’t.