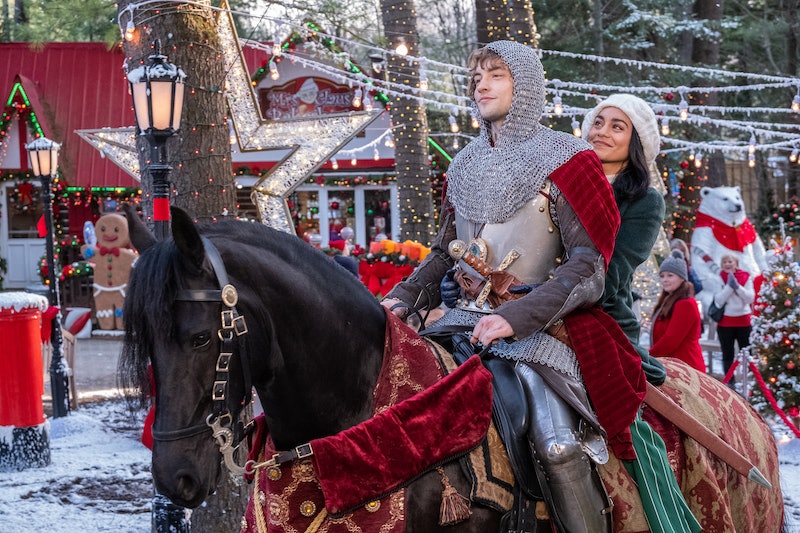 The holiday season is known for being the most wonderful time of the year, not only for spending time with family, but for relaxing on the comfort of your couch. Thankfully, Netflix's holiday movies and TV show lineup has plenty of new content to offer that's full of yuletide fun, including a new installment of A Christmas Prince — this time with a royal baby on the way to boot.

Over the last few years, Netflix has become a hub for must-see holiday films, starting with A Christmas Prince back in 2017, which became an instant obsession among viewers thanks to its fun, entertaining, and yes, super cheesy, made-for-TV holiday movie vibe. Then came the sequel, A Christmas Prince: The Royal Wedding, in 2018 along with a few additional titles like The Holiday Calendar and The Princess Switch.

This year, the streaming service is taking its love of the holiday season one step further by delivering a new bundle of streaming goodies that would make even the likes of Santa Claus proud. Netflix announced on Oct. 15 that fans can expect a series of original films and TV seasons, including A Christmas Prince: The Royal Baby and a new season of Nailed It! Holiday! So check out all the incredible options featured in Netflix's holiday movies and TV show lineup, and plan your lounging accordingly.

'Holiday In The Wild'

What It's About: Starring Rob Lowe and Kristin Davis, Holiday in the Wild centers around Davis' character, Kate Conrad, who embarks on a solo safari trip to Africa after her marriage comes to an abrupt end. There she meets Lowe's Derek Holliston, and after the two of them help nurse an orphaned baby elephant back to health, she decides to extend her trip through Christmastime and discovers just how magical nature (spending time with a handsome pilot) can be.

What It's About: Based on the best-selling book by John Green, Maureen Johnson, and Lauren Myracle, this film takes place in a small midwestern town on Christmas Eve and centers around a group of high school seniors. But when a snowstorm hits, they soon find their love lives and friendships colliding, thanks to "a stranded pop star, a stolen keg, a squad of competitive dancers, a mysterious woman covered in tin foil, and an epic party at the local Waffle Town."

What It's About: Unlikely friendships? Postal problems? This animated comedy has it all and then some. After Jesper (Jason Schwartzman) is deemed to be one of the worst students in the postal academy, he finds himself stationed in the Arctic Circle, in a town full of locals who can't stop feuding. But in the midst of all the hostility, Jesper befriends two allies: Alva (Rashida Jones) and Klaus (J.K. Simmons), the latter of which is a carpenter who lives in a cabin full of handmade toys. Hmmm, why does that sound so familiar?

'The Knight Before Christmas'

What It's About: When medieval knight Sir Cole (Josh Whitehouse) finds himself transported to present-day Ohio during the holiday season, he finds himself drawn to Brooke (Vanessa Hudgens), a local science teacher who's disillusioned by love. She agrees to help Sir Cole fulfill a quest that will help him to return home, but the more time they spend together, the more Sir Cole wonders if he really wants this mission to succeed after all.

What It's About: New York's popular radio star DJ Rush Williams (Romany Malco) finds himself in a tough spot when he loses his job just before the holidays. However, with the help of his producer Roxy Richardson (Sonequa Martin-Green) and his Aunt Jo (Darlene Love), Rush concocts a plan to buy himself another station, but there's a catch — he and his four kids are going to need to downsize and embrace a much simpler life.

'A Christmas Prince: The Royal Baby'

What It's About: It's Christmastime in Aldovia once again and this year Queen Amber (Rose McIver) and King Richard (Ben Lamb) are preparing for their first child's arrival into the world. However, they still have some important royal business to attend to first. King Tai (Kevin Shen) and Queen Ming (Momo Yeung) of Penglia come to the castle to renew a 600-year-old sacred truce, but their peaceful visit is soon jeopardized after the treaty mysteriously goes missing. It's up to Amber to once again crack the case and determine who the thief is before midnight on Christmas Eve before an ancient curse threatens the safety of both her family and kingdom. She'll need those iconic note-taking skills now more than ever.

What It's About: Paul Hollywood and Prue Leith are back at it again and ready to judge some festive holiday treats prepared by former competitors. It's enough to make anyone's mouth water with sugary delight.

What It's About: Tis the season... for epic baking fails. This holiday-themed season follows bakers as they attempt to create decadent desserts. (The key word there being attempt.) The new season will also include multiple guest judges, such as Maya Rudolph, Jillian Bell, David Burkta, Bridget Everett, Jason Mantzoukas and Ron Ben Israel.

What It's About: The holidays are supposed to be about family, but it can also be a time of great stress — something that Don Quinn (Dennis Quaid) struggles with during the hectic days before and after Christmas. Described as a strong-willed patriarch, Don faces his greatest challenge yet when his youngest daughter Emmy (Bridgit Mendler) brings home her new boyfriend, Matt (Brent Morin), a struggling musician, who threatens to cause a rift in this otherwise close-knit family.

What It's About: Hunter March, Candace Nelson and Adriano Zumbo are joined by special guest judges Tiffani Thiessen, Liza Koshy, Donal Skehan, Jeanine Mason, Amirah Kassem and Olympic Gold Medalist Meryl Davis with one mission in mind: devouring sugary Christmas treats over three rounds of competition. But nothing tastes as sweet as victory, and with the help of the judges, one team will walk away with the $10,000 prize.

What It's About: Justin gets in touch with his inner-holiday spirit by visiting Santa school and teaching kids about the magic of giving.

What It's About: Picking up on Christmas Day, the Robinsons find themselves stranded on a mysterious ocean planet, which could hold the key to reuniting with their beloved Robot. But danger lurks around every corner, leaving them all to wonder if they'll ever find their way to Alpha Centauri.

Don't miss out on all the other holiday content coming to Netflix over the next few months as well...

With movies and TV shows like these, there's something for everyone to enjoy this time of year.

More like this
Here’s Everything Coming To & Leaving Netflix In July
By Grace Wehniainen
What’s New On Netflix: The Return Of 'The Umbrella Academy'
By Arya Roshanian
What’s New On Netflix: J.Lo’s Documentary & A Melissa McCarthy Series
By Arya Roshanian
Move Over, 'Sunset'! The Drama-Filled Trailer For 'Selling The OC' Is Here
By Nola Ojomu
Get Even More From Bustle — Sign Up For The Newsletter