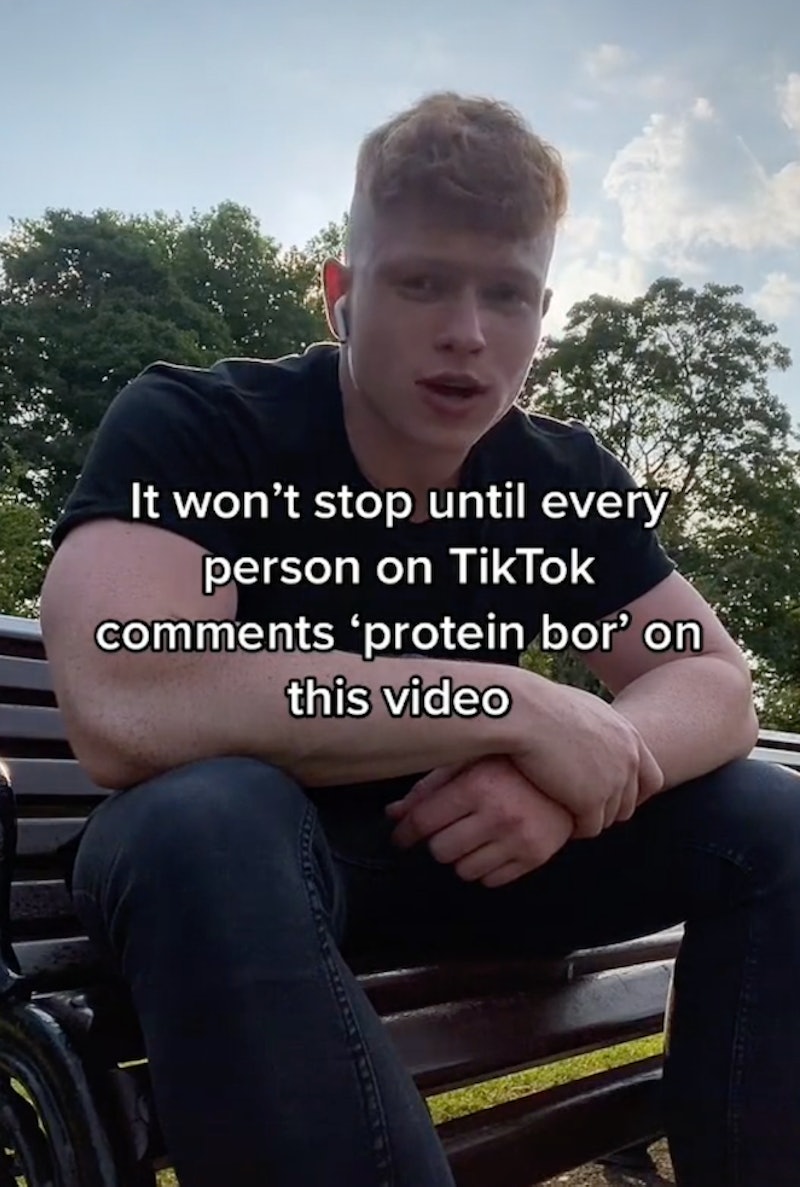 Even some of the biggest TikTok trends tend to fizzle out as quickly as they arrived. However, the platform’s latest obsession has captured the imagination of #GymTok and has got everyone talking – and in some rather exaggerated Irish accents. Curated by a popular fitness TikToker, the “protein bor” hashtag has inspired thousands of viral clips and amassed a whopping 16.2 million views to date. But, what is the protein bor trend on TikTok exactly?

As it turns out, the viral social media trend was inadvertently created by the Irish fitness influencer James Doyle, who is known for his workout videos and reviews of high-protein products including powders, supplements, yogurts, biscuits, and, you guessed it, protein bars.

However, Doyle’s reviews and gym expertise aren’t what originally caught the attention of his followers. Instead, the pronunciation of “protein bar” in his native Irish accent which sparked the “protein bor” TikTok takeover.

Amused by his pronunciation, thousands of fellow TikTokers began imitating Doyle, and protein bor quickly began to take off on the platform. Using the newfound TikTok fame to his advantage, Doyle has since become one of the biggest #GymTok accounts, with more than 163k followers and 5 million views as of this writing.

Addressing the sudden rise of the TikTok trend in an explainer video, Doyle, who hails from the town of Mullingar, Ireland, said, “I don’t know what to make of it… I didn’t mean for any of this to happen but keep it lit! We’re in motion.”

The viral success of protein bor has seen Doyle earn quite the fanbase online, and his followers are very much here for his TikTok takeover.

“I love the way everyone is commenting protein bor everywhere keep it up,” one fan wrote on Twitter, while another user joked, “Protein Bor on TikTok could be the most Irish thing to happen to any app in a long time.”

More like this
Wait, Vabbing At The Gym Is What Exactly?
By Carolyn Steber
TikTok's Grumpy Girl Stomp Is Here For Your Moody Days
By Carolyn Steber
Scotland's First Period Dignity Officer Has Sparked Backlash
By Darshita Goyal
How A "Dopamine Detox" Can Boost Your Productivity
By Carolyn Steber
Get The Very Best Of Bustle/UK