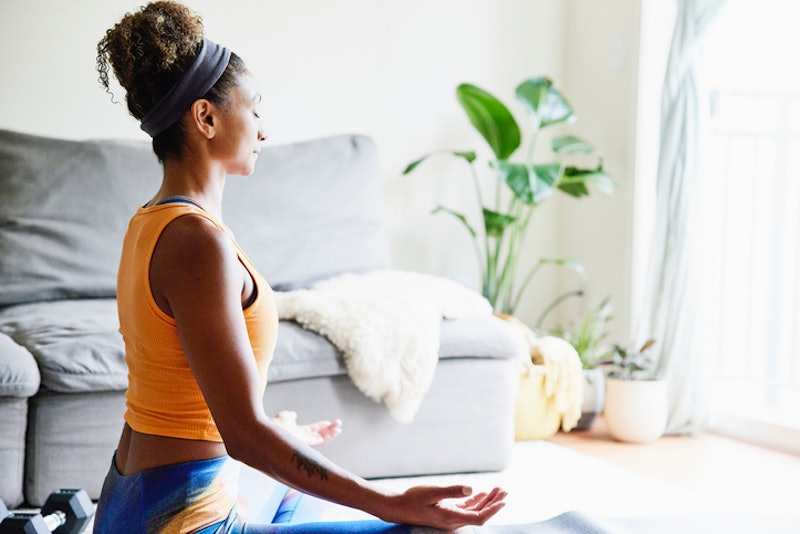 Meditation has become a staple practice in self-care, thanks to its de-stressing benefits. Within the mindfulness realm, there’s also something called transcendental meditation, a particular kind of meditation that involves stepping away from the conscious mind (and has some pretty famous devotees, including Kendall Jenner and director David Lynch). If you’ve tried typical meditation apps, yoga, and other kinds of brain-calming techniques but haven’t seen the kind of change you’d like, you might want to give the transcendental approach a go.

So what is transcendental meditation? The practice dates back to 1957, when Maharishi Mahesh Yogi, a student of the Hindu guru Swami Brahmananda Saraswati, developed it as a new route to transcend everyday worries, according to the biopsychosocial publication Behavioral Medicine Report. Mahesh Yogi began spreading his new discipline in 1958, and it became more widely known in the 1970s. Today, transcendental meditation (known as TM for short) is taught by the Maharishi Foundation USA and practiced by over 10 million people around the globe, so if you want to learn, it’s a good idea to find a teacher certified by the official organization.

Before you dive in, keep reading for intel on all things transcendental meditation, including its unique benefits and how it compares to other forms of mindfulness.

What Is Transcendental Meditation?

According to the Oxford Handbook of Meditation, transcendental meditation is all about “transcending from the active mind to the silent mind” and trying to find bliss, a sense of calm, and a reduction in stress. While both are legit ways to train your brain to be present, regular mindfulness meditation training involves being aware of your own body by incorporating elements like visualization, a focus on the breath, and/or a body scan. Transcendental meditation, on the other hand, involves repeating a mantra or sound until you let go of your awareness and surroundings.

Meditation sessions can be as long as you want, and range from 5 minutes to half an hour (or more). In its traditional practice, TM is a 20-minute long meditation where you’re fully focused on your mantra. The mental health organization Headspace notes that transcendental meditation is one of the easier kinds to pick up (since it’s so straightforward), though the Foundation recommends you do two sessions every day, so it’ll require a dedicated practice.

“Those who incorporate meditation into their lives report less irritability, less anxiety, and more motivation and ability to connect with others in a meaningful way,” Meaghan Rice, PsyD, LPC, a licensed therapist for mental health platform Talkspace, tells Bustle. There’s more, though: Research on transcendental meditation show it’s got an incredibly wide range of benefits. An overview of studies done by Brazilian scientists published in 2019 found that the big benefits reported included reductions in anxiety, depression, and stress, increased feelings of pleasure and well-being, and more effective memory.

As is the case with all forms of meditation, TM induces relaxation. “It can create a means of rerouting your mind away from de-stressing thoughts,” says Rice. “It can also enable you to experience the present moment, which increases full-body relaxation and connects the mind and body together as one.” A side effect of this? You could experience better-quality sleep.

The meditation technique can help your physical health, too; A meta-analysis of studies published in Complementary Therapies In Medicine in 2017 showed that it may help lower blood pressure, while other research has linked a TM practice with better heart health and the potential to treat attention-deficit/hyperactivity disorder (ADHD).

How Long Does It Take For Transcendental Meditation To Affect You?

Much like regular meditation, the most effective way to reap the benefits of TM is to do it every day, says Rice. “It provides an opportunity to start the day with positivity, an increased sense of gratitude, and an overall sense of mindfulness,” she explains.

Transcendental meditation also works best over the long term, experts say. “You can think of it as learning a musical instrument,” says Dr. Richard Davidson, a professor of psychology and psychiatry and founder of the Center for Healthy Minds. “If you got 24 hours of training in playing the violin, you still wouldn't be very good at playing it. The idea is that the benefits will reinforced and encourage you to keep practicing.” Doing meditation of any kind is a life-long practice, he says, adding that the skills always have room for development.

Does Transcendental Meditation Change Your Brain?

Meditation in general is known to change the way your brain works. “Experienced meditators were showing a shift in brain network connectivity that seems to be, not just during meditation, but at baseline,” neuroscientist Dr. Jud Brewer previously told Bustle. This happens to people who do transcendental meditation, too; A study in Brain & Cognition found that people who felt less stressed after TM were showing a lot more connectivity between various parts of their brains that habitually don’t correspond with each other. And that may change the way you think.

Transcendental meditation also seems to alter brain blood flow in a way that other kinds of meditation don’t, according to a 2018 study published in Brain & Cognition. People who meditated while in an fMRI machine showed high blood flow in the areas of the brain that focus attention and control executive skills (like memory and self-control), and low blood flow in areas that showed arousal. That may explain why people feel they have better memory recall after transcendental meditation, but more studies are needed.

How To Get Started With Transcendental Meditation

Rice suggests trying transcendental meditation as part of a daily routine, ideally done for 15 to 20 minutes. “If that feels overwhelming, start small,” she says. “Starting with just two to five minutes and increasing incrementally helps condition the mind and body by creating a habit.” Keep going until it feels right, she says, and you might begin to feel that renowned sense of bliss.

Dr. Richard Davidson, a professor of psychology and psychiatry and founder of the Center for Healthy Minds