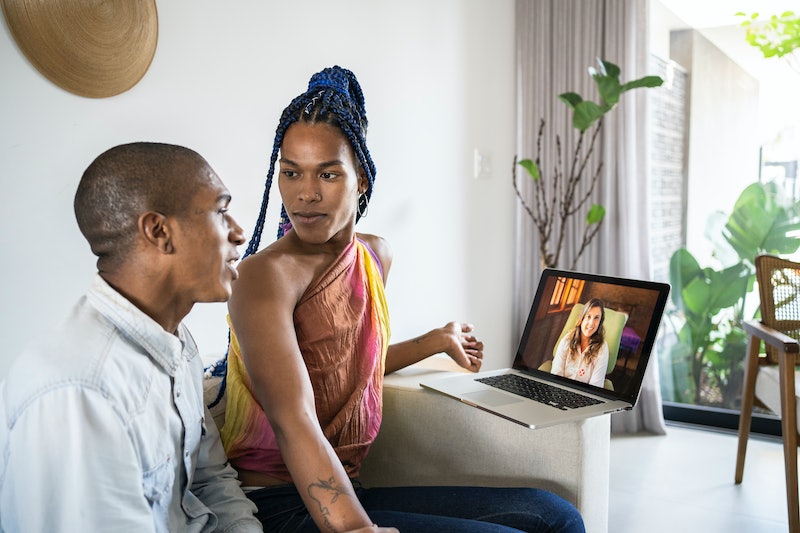 There’s a quiet moment in Legally Blonde’s otherwise explosive courtroom scene that’s usually overlooked. Elle Woods approaches the judge’s bench to replace Professor Callahan, who refuses to step aside in Brooke Windham’s case. Then Emmett — sweet, sweet Emmett — agrees to “supervise” Elle as the required licensed attorney (“I’ll supervise, your honor”). The group returns to their seats, and Elle goes on to prove Brooke’s innocence. It’s an overlooked moment because it seems obvious: Emmett would always stand up for Elle. You should stand up for your partner (or wanna-be partner), right? The scene marks Emmett as a beau worth having. So what happens when your partner doesn’t defend you?

Now, most relationships don’t form over the course of a murder trial, sure, but the premise holds: In order for a relationship to be healthy, couples need a foundation of mutual trust, respect, and support. If you have a partner who never stands up for you, it's difficult to feel truly supported.

In any relationship, there will be moments when you disagree with your partner, or someone close to them, such as a friend or family member. But in the event an argument gets heated and disrespect is thrown around, it's important that your partner has your back, even if that means standing up to their friends and family.

Why It’s So Hard To Stand Up To Friends & Family

Being in a relationship means making your partner a top priority. And while your partner might be willing to confront a stranger who disrespects you, things get trickier when if the offender is a family member or friend. "From birth, we're on our family's 'team' [so] when a rift occurs between a romantic partner and the family, it can be damaging for all involved," says Amica Graber, a relationship expert for the background-checking site TruthFinder. "Don't expect your partner to automatically take your side. It can be hard for someone to stand up against their parents, especially if they've never set any boundaries with their family."

They might feel disloyal by voicing support for you. But your partner should want to present a united front with you — their chosen life partner — regardless of whether they agree with you in the moment.

"It should be said that being romantically involved with someone doesn't always mean that you take their side," Graber says. "Although a partner should be honest with you about their reservations in private, they shouldn't express those doubts in public."

Standing up for each other can be as simple as saying, I don't like the way you're speaking to my partner. We're going to remove ourselves from the situation to calm down. We will reach out when we're ready to talk again.

"Being unwilling to defend a significant other doesn't necessarily mean someone is being disrespectful or ignoring your feelings," Graber says. "They might be extremely averse to conflict. But if someone repeats the same behavior without being willing to work on it, it may be a sign that you're incompatible, especially if lack of loyalty is a deal-breaker [for you]."

No one wants to feel abandoned by their partner during a difficult situation, and creating trust comes from proving, time and again, that you'll defend and support each other, no matter the situation. "Creating trust is the whole point of offering emotional/physical/intellectual spiritual support," says Hanalei Vierra, a California marriage and family therapist. "If this kind of support is missing in a relationship, trust will be compromised and the person slighted will feel alone."

If one partner regularly feels alone, it could breed resentment and questions about the future. "If someone can't support you during an external conflict, they probably aren't going to support you in any other areas of your future, such as your career or having a family,” Graber adds. “You have to ask yourself if that's truly a relationship you want to be a part of."

How To Tell Your Partner You Need More Support

"Let your partner know, 'I can see why you feel that way,'" Vierra says. "Then add, 'I happen to have a different opinion, but that does not discount what you are feeling and the value your feelings have.'"

“Being a team doesn't always [mean] fighting the other person's battles on their behalf,” Graber adds. “But it does involve offering support and listening to your partner's perspective on the situation." If you've communicated your position and don’t see any change in your partner’s behavior, that could be a sign. It's up to you to decide whether to stay or move on, ideally to find someone who is willing to be your teammate.

"A couple who demonstrates mutual support will be a longer-lasting and happier couple," Graber says. "Life will always throw challenges at you, and being able to manage the small ones will help prepare you for the big ones. Facing challenges together will be nearly impossible without offering mutual support. Having someone who is willing to fight for you, metaphorically speaking, increases feelings of love and security in a relationship."

This article was originally published on November 15, 2018