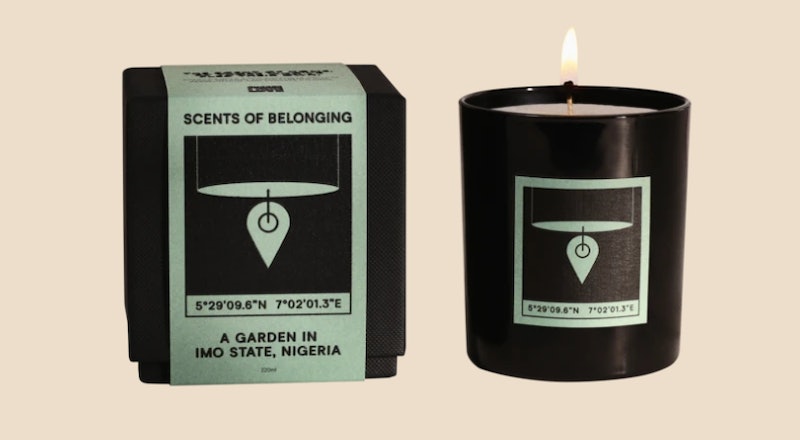 Earl Of East
By Alice Broster and Rowena Henley
June 24, 2021

Leading refugee charity Choose Love has teamed up with Earl of East to develop a new home fragrance range inspired by the stories of three refugees. The candles are part of the Scents of Belonging collection and 100% of the profits from every candle bought will go to Choose Love to help them support people who are fleeing war, human rights atrocities, and climate change.

The three candles were inspired by stories from Vanessa Nwosu, Imad Alarnab, and Majid Adin.

Vanessa is from Nigeria and arrived in the UK in 2019 as a refugee following persecution she faced for being part of the LGBTQ+ community. Having relocated to Cardiff, she can now live out and proud, but she still misses home, most specifically her grandmother’s house in Imo State, the smells of which inspired her candle. Speaking about her memories from Imo States, she says “We used to play in my grandmother’s garden and sometimes pick fruits from it - pineapple fruit, papaya, peach and mandarin, which is one of my favourites to pick. I really miss my grandmother’s house, talking about it makes me happy because it’s been years since I’ve been there.”

A Garden In Imo State, Nigeria
Earl Of East

Vanessa’s candle blends the sweet smells of sugarcane, pineapple leaves, and hibiscus flowers with the refreshing scent of rain.

Imad Alarnab is a chef from Damascus, Syria. He fled in 2011 and faced some extreme difficulties on his journey to the UK. “There were times when I thought, this is the end, but I wanted to see my daughters again, so I did reckless things like trying to hang on under lorries. I was in Calais for 64 days, so I had to cook; we made stews, we went fishing and cooked our catch. Sometimes I cooked three times a day. It was nice to have the chance to cook.” When he thinks of belonging, he thinks of his mother's kitchen. Imad recalls fond memories with his mother, saying, “We had the most beautiful, quality time in the kitchen. In there she taught me how to cook and to be honest, she taught me a lot of things besides cooking. I have a lot of memories from that place; the view of the ingredients, the smell and how we worked together.” His candle in inspired by the smells from that kitchen.

A Kitchen In Damascus, Syria
Earl Of East

Majid Adin is an artist living in London. He left Iran in 2016 as he faced persecution for his writings and cartoons criticising religious conservatism, travelling into the UK in a refrigerator in the back of a truck. When he thinks of home, he thinks of spending time on a rooftop in Mashhad, looking out onto the city. “I remember the summer nights… on the roof with all my siblings,” he says. “[W]e’d sleep on the rooftop, you could see the stars in the sky, and the smell of the jasmine blooming at night was amazing.” These smells inspired his candle for the Choose Love campaign.

A Rooftop In Mashhad, Iran
Earl Of East

Choose Love provides essential supplies, legal advice, and search and rescue boats to support and advocate for refugees and displaced people. They work internationally and their website details that they have reached one million refugees. The Scents of Belonging collaboration with Earl of East is their latest campaign to raise the profile of refugee stories and raise money for their work.

If you want to learn more about Vanessa, Imad, and Majid and their stories, BAFTA-winning Syrian filmmaker and rights activist Hassan Akkad has created three powerful documentary shorts, which can be seen above.

Find out more about how you can support refugee charities here.