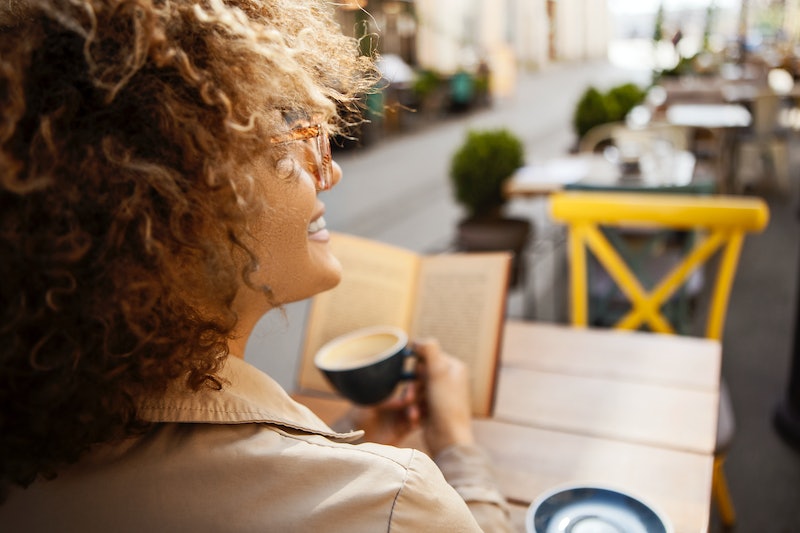 Double espresso. Almond milk latte. Long black. French press. Gyokuro green tea. However you take it, 85% of all U.S. adults have at least one caffeinated drink per day — and you might have noticed that a little coffee or tea is crucial to keeping you alert and happy. There’s some truth behind those extremely cheugy “Don’t Talk To Me Until I’ve Had My Coffee” mugs: caffeine does make you feel better, and not just because you feel more awake.

“I really need coffee to start my day now,” Kate, 25, tells Bustle. “If I don’t have any I get droopy and sleepy — like the Seven Dwarves. And I’m more irritable.” Her mood picks up noticeably after she has her morning pour-over.

A bit of caffeine can help your mood, Dr. Seema Sarin M.D., director of lifestyle medicine at EHE Health, tells Bustle, and it’s not just getting rid of the 8 a.m. grouches. Several studies, including one with over 50,000 women, found that some coffee or tea reduced peoples’ risk of depression.

Why Caffeine Can Make You Feel Better

When you’re given a jolt of Nespresso, your brain wakes up and starts paying attention. A study published in Physiology & Behavior in 2017 found that when people who were stressed were given a low dose of caffeine, their cognitive function — aka, how quickly and logically they could think — improved and their anxiety levels went down. Another, published in Canadian Journal of Physiology and Pharmacology in 2017, found that people tended to respond more positively to sad pictures after a little caffeine. (That’s why you might want to wait to read Twitter until after a matcha.)

Tea in particular can help lift your mood. It’s not just the caffeine in tea that affects you; it’s also other ingredients like theanine. While caffeine hypes you up, theanine soothes you, which is why tea is often a more relaxing drink than that double espresso.

There are a lot of potential reasons why caffeine might get you out of your funk, Dr. Sarin says. It could have to do with its anti-oxidant and anti-inflammatory effects, or something related to caffeine’s impact on your gut health. Caffeine’s boost of energy could also help because it gets you out of bed and active, instead of going over your stress dream from last night.

How Much Caffeine You Need To Feel Better

This isn’t an excuse to spend *all* your money on Starbucks, however. Too much coffee or tea can make you more stressed, by encouraging your body to release stress hormones like adrenaline and cortisol. For people with mood disorders, higher amounts of caffeine — think, over four cups a day — worsened their symptoms, according to a 2014 study.

“Two cups of coffee per day is best,” Dr. Sarin says. That way, you still get benefits from that cup of joe, but not enough to give you jitters or add to your stress levels. Some people are more genetically sensitive to caffeine than others, which is why you might drink four cups and feel nothing, and your bestie starts to get anxious after one Nespresso. Needing a cup of coffee in order to feel like a human is totally normal — and chances are, your brain is benefitting from it.