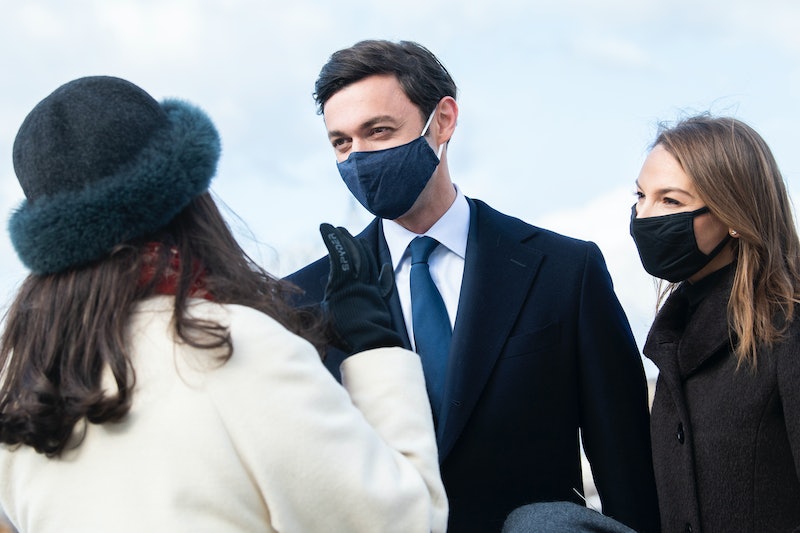 When you think about it, the fact people go weak in the knees when someone winks is kind of bizarre. All they have to do is quickly close an eyelid, and we find it attractive. And for what? It seems strange until you learn more about the psychological reason why winking turns you on.

To start with an example, see the United States Senator Jon Ossoff, who recently winked mysteriously at someone during his swearing-in ceremony. (Note: It was likely meant for his wife, Dr. Alisha Kramer, who was present.) Ossoff's win made history, and his wink was the icing on the cake — especially for his countless adoring fans.

There's also been a lot of winking happening on TikTok lately, particularly in "thirst trap" videos. A perfectly-timed wink seems to garner thousands of likes and just as many X-rated comments. It's even possible to find winking tutorials for anyone who wants to add a little sexiness to their own uploads.

Clearly, winking makes people sweat. But let's talk about why winking is so hot, psychologically speaking. As Laura Richer, MA, LMHCA, NCMHCE, CHT, a certified couples therapist, tells Bustle, it has everything to do with the fact we've established winking as a flirtation technique — one that implies attraction. (See also: Winking emojis.)

"The wink is ambiguous and loaded all at the same time," Richer says. "The subsequent thoughts that follow a wink can lead to a hormonally generated euphoric response. If offered up by someone appealing, it can prompt your mind to think of all sorts of possibilities." Will you hook up? Date? Fall in love? The mind reels.

This is why we find a wink from someone unappealing so, well, unappealing. A person has to already fit your idea of "attractive" in order for their wink to be a turn-on. It also has to be done in the right setting, Richer says. A poorly timed wink will always seem creepy, while a cool wink — like Ossoff's — is all sorts of suave.

Another reason winking is sexy? Eye contact. Not only is eye contact a powerful, non-verbal way to communicate, it also solidifies a connection. "The reason a wink can be so sexy is the idea that you have a shared secret," Dr. Claudia Luiz, a psychoanalyst, tells Bustle. "Something between you that nobody else knows about, but has no language — just like sex."

It's why if you're at a crowded bar, happen to glance across the room, and an attractive stranger catches your eye and winks, your heart might beat faster. Winks are charged with sexual energy as well as a sense of desire. If you wink or get winked at, it's like taking the first step towards something more.

"The implication is that you’re special, and you are being let into a 'private house,'" Luiz says. "You’re the special one — nobody else. When someone winks at you, you’re 'in.'"

More like this
Are Quality Time & Gift-Receiving Love Languages Compatible?
By Lexi Inks
10 Creative Sexting Ideas That Don't Involve Nudes
By Lexi Inks
The 19 Best Tweets & Memes About Bisexual Awareness Week
By Lexi Inks
How To Set Rules If You're In An Open Relationship
By Lexi Inks
Get Even More From Bustle — Sign Up For The Newsletter