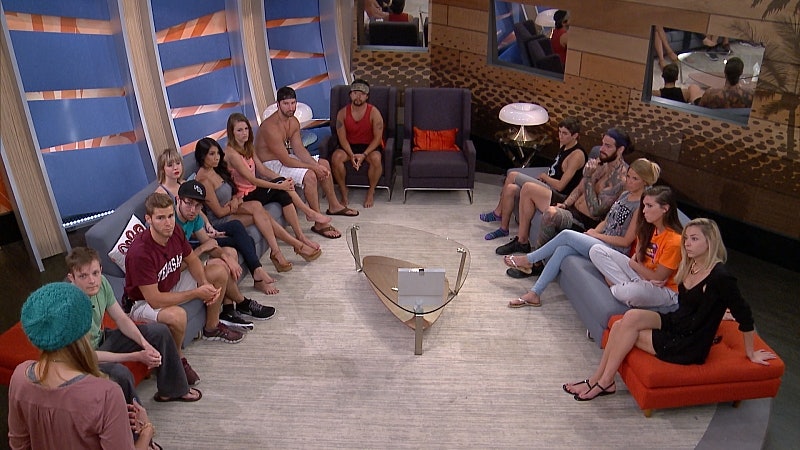 Poor Austin. The world of the Big Brother house seems to be crumbling under his feet. Not too long ago, Austin was my favorite player in the house. He was the one I wanted to win, but I was also confident that he would win. But now? Because of a deadly combination of showmance, romanticism, and stirring the pot, he’s pissing everyone off in a major way. And doesn’t even realize it. I've gone from thinking he’s sure to win, to thinking that Austin is sure to be evicted from Big Brother . And soon. So what exactly has been going on with Austin in the past few days that has drastically changed his game?

For one thing, his adoration for Liz has completely clouded his mind and compromised his game. The only thing he seems to care about is Liz and getting her through to the end. Everything else — including his super powerful alliances, the way people talk in the house, and the fact that Liz has a twin who is coming to play the game soon — seems to have completely slipped his mind. Ever since he’s fallen (hard) for Liz, he has been making mistakes left and right. Like on Sunday night’s episode, when he revealed information about the twins to Jason — the absolute wrong person to tell about anything.

I don’t know what Austin was thinking by telling Jason about Julia and totally throwing her under the bus. Austin isn’t revealing what his ultimate plan is — even though he says he has one — so I’m not sure what he’s actually thinking in these moments, but I am sure of the consequence: He’s pissing everyone off and putting himself in serious danger. He’s lying to Vanessa’s face. He’s throwing people in his alliance under the bus. And he’s trying to pit Liz and Julia against each other. I mean, WHAT IS THIS GUY THINKING?

The only thing that I can think is that he’s not thinking. He’s too wrapped up in the Liz of it all to think clearly about the consequences of his actions, and so he's lost total control over his strategy. Instead of thinking about his alliance and himself, he’s thinking solely about Liz and what he can do to ensure that they live happily every after together. Which may be super sweet and super gallant, but it’s also not super smart, especially when there is $500K on the line.

All of this just goes to show what fools love makes of men. Especially big, romantic, wrestler men.

And for more Big Brother, make sure to check out The Diary Room, Bustle's Big Brother podcast:

More like this
Austin Butler & Kaia Gerber Have Had The Ultimate Whirlwind Romance
By Sophie McEvoy
Jill Zarin Said Her 2011 RHONY Firing “Felt Like A Death”
By Brad Witter
Taylor Armstrong Would “Definitely” Return To RHOBH After Her Season 3 Exit
By Brad Witter
Which RHODubai Housewife Has The Biggest Net Worth?
By Hugh McIntyre
Get Even More From Bustle — Sign Up For The Newsletter