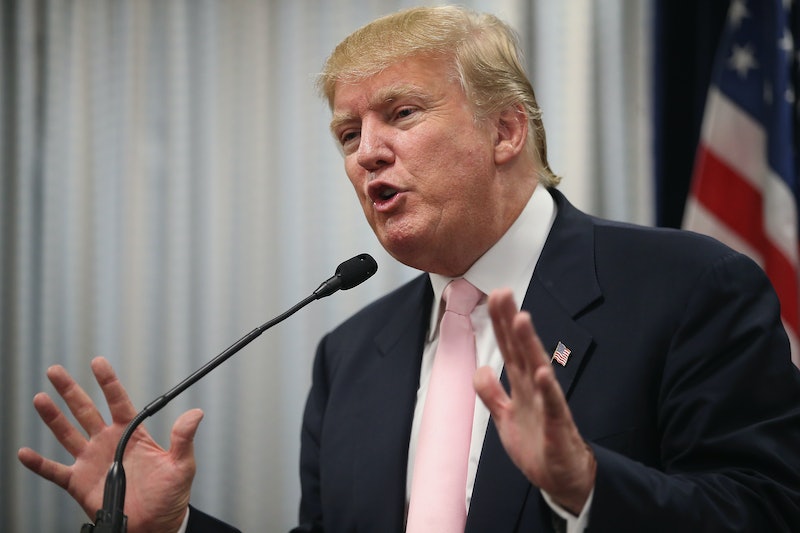 Somehow, despite all of his ridiculous comments and the whole Trump Your Cat thing, Donald Trump is still leading in early polls for 2016 Republican presidential candidates. Many Republican senators have spoken out against him or said that early polls often aren't strong predictors of how campaigns actually turn out. Let's hope they're right, because given Trump's recent comments about Mexican immigrants, it would be pretty horrifying if people actually really wanted to vote for him. The controversy surrounding Trump's comments has been going on for a few weeks now, and he still hasn't apologized. Thankfully, there's one recent photo that sums up all of Trump's thoughts about immigrants.

During his presidential campaign kickoff speech last month, Trump said of Mexican immigrants: "they're bringing drugs, they’re bringing crime, they’re rapists," before admitting that “some, I assume, are good people,” according to the Associated Press. Trump has refused to apologize for the comments, and some of the other 2016 Republican hopefuls have even added fuel to his fire. I mean, why wouldn't they? Trump is the only candidate who is brazenly and brilliantly talking about the issues, right? (No, not right.) In Trump's mind, you gotta hit 'em where it hurts, and then you've gotta visit the border to make sure no one else can get in. Trump was caught on camera standing behind Laredo, Texas City Manager Jesus Olivares. According to the Guardian, Olivares said he openly opposed Trump's plan to build a wall on the border, and Trump gave him this look:

Just Trump being Trump. He told Laredo, a city that is 95.6 percent Hispanic and Latino, that there's “tremendous danger with illegals coming in,” according to the Guardian. Trump's disparaging look almost seems to say "I could buy your city if I just sold the gold-plated faucet in my Boeing 757."

And that's the saddest thing about Trump's views of Mexican immigrants. He seems to speak from a place of superiority, which is why this photo sums him up as a candidate. He has repeatedly emphasized just how rich he is, which actually makes it clear why he's so anti-immigration: Trump doesn't seem to have any empathy for the plight of Mexican immigrants, who have often come to the U.S. for better opportunities.

More like this
Boris Johnson’s Leadership Is In Question – Again
By Bustle UK
How To Support Gun Control Reform Right Now
By Morgan Brinlee and Carolyn Steber
How To Fight For Reproductive Rights, Based On How Much Time You Have
By Courtney Young
How 5 People Upended Their Lives To Fight For Abortion Rights
By Hannah Smothers
Get Even More From Bustle — Sign Up For The Newsletter