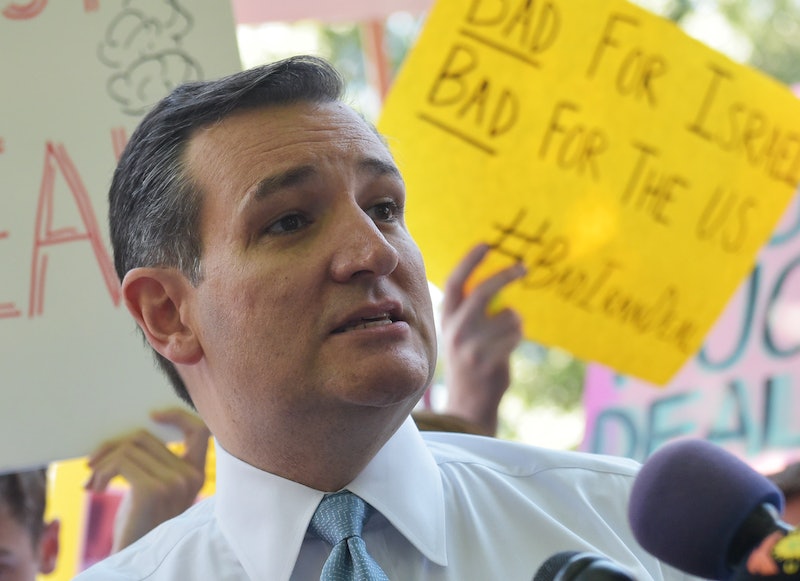 Donald Trump is still the leader in early polls measuring support for the 2016 Republican presidential candidates, according to the Washington Post. His surge comes despite recent, inflammatory comments he made about Mexican immigrants and Arizona Sen. John McCain. The comments ranged from calling Mexican immigrants "rapists" to saying that McCain, a Naval aviator and prisoner of war during Vietnam, was only a war hero because he was "captured." Unfortunately, a number of politicians still support Trump despite his remarks, which makes me either really embarrassed for them, or in sheer disbelief and facepalming denial.

The politicians in support of Trump either flat-out agree with his remarks about immigration or wouldn't say that they were false. Some of the other 2015 GOP presidential candidates who supported Trump even after his comments about Mexican immigrants have since voiced flagrant disagreement with his statements about McCain (because at least veterans are important humans).

Maybe Trump is just getting attention because of the obvious absurdity and entertainment factor evident in is comments, rather than because people actually believe that what he's saying is valid. Unfortunately, it seems that the former is less likely, because we're kind of talking about choosing a president for our entire country (just a bit little important), and not a late-night talk show host. And most Republican Congressional representatives and senators are aware of that, because all of the ones interviewed by Bloomberg either answered negatively or wouldn't answer when asked whether Trump would be good for the party. But still, there are three Republican presidential candidates who support Trump and his comments, and they support him as the actual president. Like, for real.

The former Hewlett-Packard executive and one of Trump's fellow 2016 Republican candidates told ABC that Trump “tapped into an anger" she hears every day about the security of the southern U.S. border, according to The Guardian:

In an interview with CNN, she also said Trump is "hitting on issues that Americans care about." Oh, yeah, like the fact that he's really rich, right?

Sen. Ted Cruz, a Republican from Texas and 2016 GOP presidential candidate, told Fox News that he's friends with Trump, and that it's no surprise that Trump is leading in the polls:

He’s bold and brash, and he’s willing to speak the truth. And he’s taking on the Washington cartel.

LOL, the Washington cartel. Cruz didn't specify what "truths" Trump spoke, but he did say he appreciated Trump's focus on undocumented immigrants, according to Fox News. Cruz did not call out Trump for his comments about McCain, but he did tweet his support for McCain as "an American hero."

The retired neurosurgeon who is running for president in the Republican party defended Trump even after his comments about McCain. Some of the other Republican contenders have called for him to drop out of the race after the comments, but Carson said that seems "petty" and unnecessary, according to the Washington Post:

I’m not sure from listening to what he said that he thinks that Mr. McCain is not a hero. He has repeatedly said yes, he is a hero, so I don’t know where that comes from that he’s disqualified.

Trump did later say that McCain was absolutely a war hero, but his initial comment — "He’s a war hero because he was captured. I like people who weren’t captured" — makes it sound as if McCain would've been more of a hero if he hadn't spent five years in a Vietnamese prison being tortured and beaten. It's unclear why Carson — or any politician — would want to defend that sentiment.