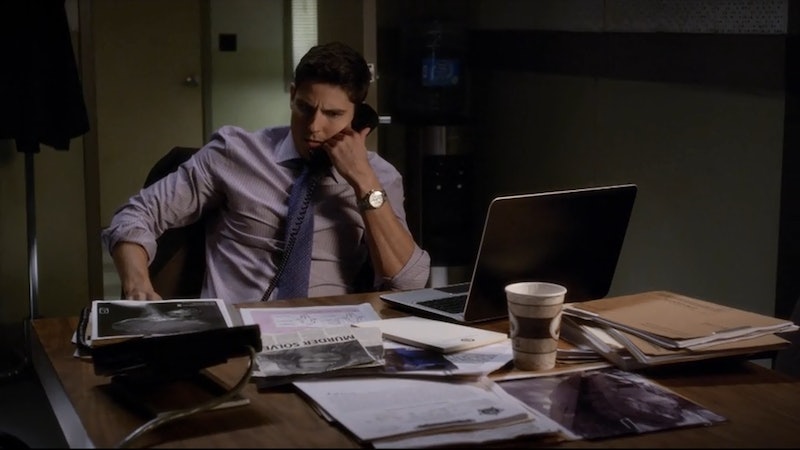 Is it just me, or do Rosewood's largely handsome, largely suspicious police force all start to blend together at a certain point? I mean, first there was Wilden, then there was Garrett, then there was Holbrook, and now we've got Lorenzo (and Cadet Toby, of course). Wilden and Garrett are both ostensibly dead at this point (though you never really know in Rosewood — no, not even if you see their lifeless eyes staring up at you from the trunk of someone's car), and Lorenzo and Toby are still on active duty. But what about Detective Gabe? Where is Holbrook in Pretty Little Liars Season 6?

Well, to recap, he's no less shady than the rest of his cop brethren. He was briefly a kinda-sorta love interest for Hanna while Caleb was hanging out with ghosts in Ravenswood, but then it was revealed he was working for Alison (and he may or may not have been spotted kissing her in a Santa suit at her version of the Yule Ball). Then he was put on leave by the Rosewood PD, shared a confrontation with Hanna in which she rather awesomely took a swing at him with a tire iron, thus striking a literal blow for underage girls all over Rosewood, and we haven't seen him since. So what could he have been up to all this time? Let's wildly speculate.

Well, we know he's not in the barrel, or Bethany Young's recently-exhumed grave (both for obvious reasons), but that doesn't mean he's not somehow dearly departed. After all, he did seem to be mixed up with some pretty heavy stuff, and we haven't heard so much as a peep from him since.

He Could Be... Working With Ali

Alison's been largely laying low since the #BigAReveal, but the recent episode "Oh Brother, Where Art Thou" reminded us that she's still quite the force to be reckoned with. I mean, I don't think anyone wants to mess with a 17-year-old who's willing to dose her own father with sleeping pills, then casually meet up with her life-long nemesis.

The heat may be on Charles at the moment, but I'm not excluding Ali as a potential A Team member — and if Ali's in on all the drama, it's quite possible that Holbrook could be too. Sure, it seems like they're not on the best terms (after she got him fired from the Rosewood PD and all), but who even knows which way is up at this point? For all we know, they could still be meeting up under the mistletoe.

Let's face it, Holbrook has never exactly been one of the most trustworthy guys around. There was the fact that he lied about taking care of his ailing father (who just so happened to live in an ultra-creepy trailer park), then there was the whole deal with Ali's suspiciously-passed lie detector test. Holbrook's seemingly romantic past with Ali means he can't be Charles, but he definitely could be involved somehow, and as Bustle writer Lindsay Denninger points out, he's a prime contender for Varjak.

On a Reddit thread asking after Holbrook's whereabouts, astute commenter prettylittleangry got it exactly right:

Chilling with Sydney and Jenna and Lucas and Noel and Ben in the forgotten character bin. Occasionally the writers reach in and pull one out to play with for a few episodes. But I have a feeling Holbrook is way down at the bottom underneath the guy who flew Ali back to PA that Labor Day weekend.

Yeah, sad as it may be, that sounds about right. We'll have to wait and see if Pretty Little Liars ever reveals Holbrook's whereabouts, but in the meantime, get your theory fix with Bustle's podcast Taking This One To The Grave.