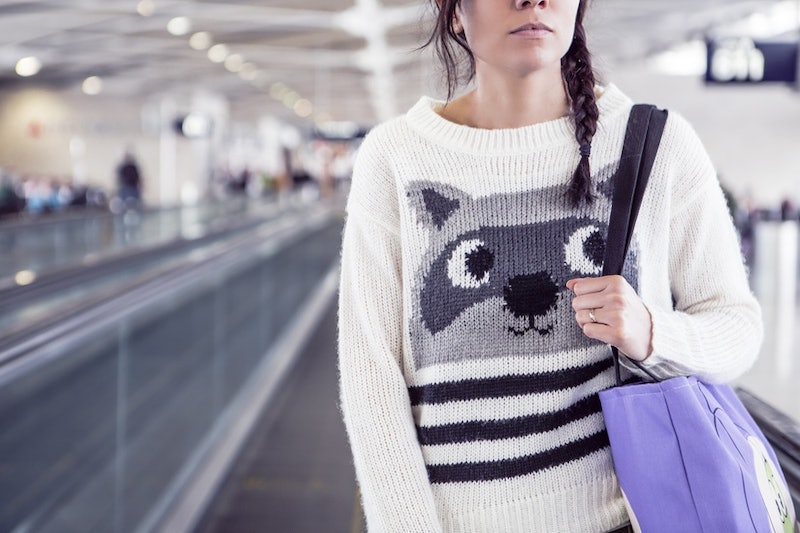 It's 2005. I am standing on the edge of a pool deck with my eighth grade ~boyfriend~, a mere week after my parents took us to see March of the Penguins together and we held hands exactly once. All of the cool kids in our class are watching us from the other side of the pool, and I am painfully aware of it. One of them is even waving slyly at me from behind the boyfriend's back. I was a nobody last week, but now, armed with "boyfriend" status, I am — for a hot second, at least — cool. And then the boyfriend extends his arms out, his palms face up.

We're at a swim meet, so I do what seems logical: I high five the living bejeezus out of him. But his hands are limp and his arms ricochet backward so comically that anybody who wasn't looking at us before certainly is now. There is no echo to the pathetic sound of our palms slapping, but I can still hear it in the back of my head, on excruciating repeat, as he says to me just loud enough for the whole pool to hear, "I was trying to hug you."

Everybody laughs. Nay, cackles. It's a freaking after school special of middle school bullying. All summer long people will reenact the scene, a little more exaggerated and mean every time (you have to understand that there was no Netflix then, and this was the only way we knew how to amuse ourselves). It will go down in Longfellow Middle School history as That Slightly Awkward Thing Emma Did That We Will Never Ever Let Go.

Because in case it hasn't occurred to you yet, I am awkward. That sad-tastic high five hug? Was nothing compared to the idiocy that came before it, or the idiocy that would follow. I have shoved my foot so far into my mouth that it came out the other side. I have tripped on morning runs so spectacularly that several cars have stopped to make sure I hadn't spontaneously combusted. If there is a potential for an awkward thing to happen — pit stains that went down to my waist, party fouling my very first beer before I even got to sip it, leaving my computer open with my fan fiction fully displayed in the library — I will make that potential a reality, so help me god.

TL;DR: I am an awkward individual. If you are reading this, you probably are too. And hey, we don't have much of a reason to complain. Our lives may be awkward, but it keeps us on our toes (and, incidentally, other people's). Still, as #baller as we are, I bet you've had people say all the same stuff to you growing up and into adulthood that you're super sick of — including and not limited to...

"You just need to be more confident."

There is this pervasive and annoying notion about "awkward" people that we somehow suffer from a lack of self-esteem. That our inherent awkwardness is not a result of, oh, say, our personalities, but actually the product of us just not trying hard enough to like ourselves. Even now, fully graduated, employed, and living in New York like a functional adult in my twenties, I am slammed with this constant implication that "confidence" is the root of all my problems.

PSA, fellow humans: Confidence and awkwardness are not mutually exclusive! Awkward people can be plenty confident. It doesn't necessarily present itself in the predictable ways everyone is used to, but that doesn't mean we don't own every inch of our fabulously awkward selves.

"What are you so afraid of?"

A lot of people think awkwardness is a product of being nervous, when in fact awkward people are pretty damn fearless. Like, we awkward people have zero shame. You couldn't embarrass us if you tried, and you can't put a price on that kind of freedom. I have traveled to strange places where I didn't know a soul, flown solo on activities I've never tried, and let loose in moments that I could have easily wrecked by overthinking about what I looked like. We awkward people have made a bank of awkward memories that will last us a lifetime (or in my case, hopefully for as long as I need to exploit them for a writing career). We use the awkwardness to our advantage, and become stronger, better educated, more capable people for it.

"You should let people get to know the ~real~ you."

This is always kind of stunning to hear from people — usually well-intentioned people who haven't known you for very long, or people who think they do. Like they think they can crack our awkward like a Wonder Ball and on the inside there will be this magical, perfectly smooth personality that has carved all of our weirdness away. Spoiler alert: the awkward is inherent. We were born with it, and will exist in it for as long as we live. If you crack open that Wonder Ball I made a terrible metaphor with, you're just gonna find more awkward.

I mean, it's rare that people say this kind of stuff. More often than not you will gravitate toward friends who are accepting of your awkward, or just as awkward themselves. But in the occasional situation when someone thinks your awkwardness is some well-crafted ~facade~ to hide real self from the world, well — they're gonna be waiting for the "real you" for a long ass time.

"It would be easier if you just acted normal at first."

Nobody comes outright and says exactly this, but they'll beat around the bush on it. Why did you put that weird joke in your dating profile? Why did you overshare so hard at that party? Did you have to open with that?

See, when everybody else is pretending to be normal for a good first impression, most awkward people are full on weird from the get-go and don't bother with pleasantries. And really, wouldn't the world just be a better place if we were all honest about who we were right off the bat? It may be rough in the short term when you get rejected or don't mesh with someone well, sure. But it's hella easier to be yourself the first time instead of painfully easing someone into your weirdness whenever you meet someone new, and worrying if they're going to like you the way you actually are.

"I always thought you'd just grow out of it."

Awkward kids grow into awkward adults who make this kinda stuff happen. It's no huge secret that awkward people tend to be more creative, and that creativity blossoms into awesome things we can all enjoy. So leave us alone and let the awkward people follow their awkward bliss. I sure as hell did, or I wouldn't be getting paid to write this right now. (BOOM.)

"Has anybody ever told you you're really, really awkward?"

You know what, haterz? Awkward is the new normal. Soon enough none of this article is going to matter, because we'll have all mutually decided to lean into it and let the awkward overcome us. Until then ... get on our level, everyone else. Or at least let us stay on our level, where we happen to be perfectly content with ourselves, thank you very much.