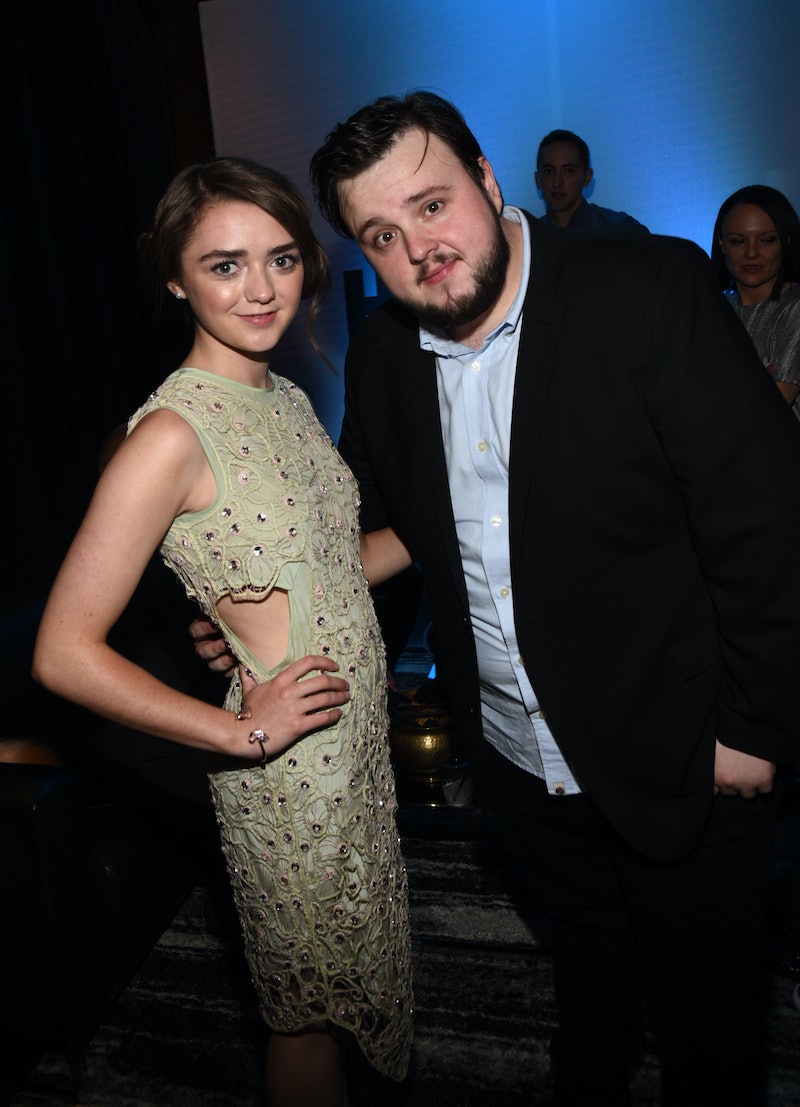 It's pretty much a given at this point that everybody loves Game of Thrones. It's one of the hottest pop culture phenomenons of the moment, so between what with all of the cliffhangers, everyone and their (famous) brother has intensely studied and analyzed the series. Your favorite stars are no exception to this, as it turns out, celebrities have Game of Thrones theories just as impressive as any other fan's, and join us in our obsession.

I mean, everyone from Sarah Hyland to Zach Braff has fan-girled/fan-boyed over Kit Harington, Jay Z allegedly bought Beyonce one of Daenerys' dragon eggs, and Kristen Bell and Dax Shepard jokingly taught their daughter how to say "Winter is coming," and "You know nothing, Jon Snow." Heck, Ike Barinholtz's Brienne of Tarth cosplay was seriously on point, Seth Rogen made himself an adorable house sigil, and Nathan Fillion's completely-silent recap of Game of Thrones is the best thing you'll ever see, ever. For these well-known fans, theorizing is just the tip of the iceberg.

However, some of the theories are more like wishful thinking than actual predictions (as Carice van Houten pragmatically told Vanity Fair, seeing Daenerys on the Iron Throne would be something akin to a Disney ending — and we all know that's not GoT's style). Still, it's fun to see our favorite celebs and GoT actors sound off on what they foresee happening on the epic saga. Read on for some of the best.

Jon Snow conspiracy theories have been flying ever since the show aired its Season 5 finale in June, and everybody's in on it, even President Obama (he famously asked GoT producer David Nutter about Jon's fate).

Kit Harington (AKA Jon Snow himself), Maisie Williams, and the show's producers all maintain that Jon is dead, but cast members Emilia Clarke and van Houten haven't been so quick to renounce the speculation: Clarke maintains that there's a "50/50" chance Jon could come back, and van Houten told The Sun, “No, he can’t be dead. No!” Oh, and you know who else thinks he might come back? Former Girls Next Door star Holly Madison:

To sum up? Daenerys, Melisandre, President Obama, and an old flame of Hugh Hefner all believe there's still hope. For more on Jon Snow's fate, check out the video below.

This theory has so much evidence built up in its favor, that it's practically canon at this point — and the Artist Formerly Known As Ned Stark (aka Sean Bean) certainly treats it as such: In an interview with Vulture, he joked about the impending need for some Ned Stark flashbacks, because as he so succinctly put it, "I'm obviously not Jon Snow's dad." Watch the video below for all of the clues pointing to this actually becoming canon.

Noted GoT fanatic Kristen Bell once tweeted, "if khaleesi doesnt get her ass to town&start hookin up w/john snow, I might quit watching." Unfortunately for Bell (who penned the tweet two years ago), Daenerys hasn't made her way up to The Wall yet... but then again, there are the popular theories that posit that Jon and Daenerys are respectively the "ice" and "fire" of the saga's title — so maybe her wish will come true someday.

4. Jaqen H'ghar Is Part Of A Conspiracy

Jaqen has always been quite the enigmatic figure, and his prominent role in Season 5 did little to unshroud his air of mystery. Tom Wlaschia hinted that his character might be part of something bigger, when he reminded Entertainment Weekly, "We still don’t know why he surfaced in first place." He went on, "He was a prisoner in King’s Landing. Why was he there? Was it all part of a bigger plan and, if so, who is behind it? I like that his character is so mysterious."

It's also worth pointing out that the Huffington Post asked him what he thought about the popular Syrio Forel/Jaqen H'ghar theory, he was quick to leave his options open: "I have no idea! I don't think so ... But I couldn't give you any good reasons why not." Either way, it looks like we can expect to see more of our favorite Faceless Man in seasons to come!

Actress van Houten told Vanity Fair, "I wish we could live in a world where Sam Tarly's king," though she was quick to temper the statement with an acknowledgement of Westeros' bleak ways: "He's probably going to get killed within a few minutes."

On a slightly different (yet still related) note, John Bradley-West also weighed in on Sam's future in a recent interview with Vulture: "You know when people leave school to go to college and that summer they invent a completely new personality? I hope Sam arrives in Oldtown with sunglasses and a leather jacket on, lying about what a legend he is." I say we should combine van Houten and Bradley-West's headcanons — I mean, Sam in sunglasses and a leather jacket on the Iron Throne? Yes to all of it.

6. Daenerys Should Take The Iron Throne

Lots of people cherish a wish for the former Khaleesi to one day rule over Westeros, but there's one particular person who wants it more than anyone else, and that's Iain Glen. When Entertainment Weekly asked him what he wanted for his character Jorah Mormont, he rather adorably answered, "I’d like to see Daenerys sit on the Iron Throne ... I’d like him to help her achieve her success." Aww.

What are your predictions for the Seven Kingdoms? My current favorite theory is that Sansa and Gendry will fall in love on the battlefield and get married. I'm no celebrity, but I don't think it's half bad.