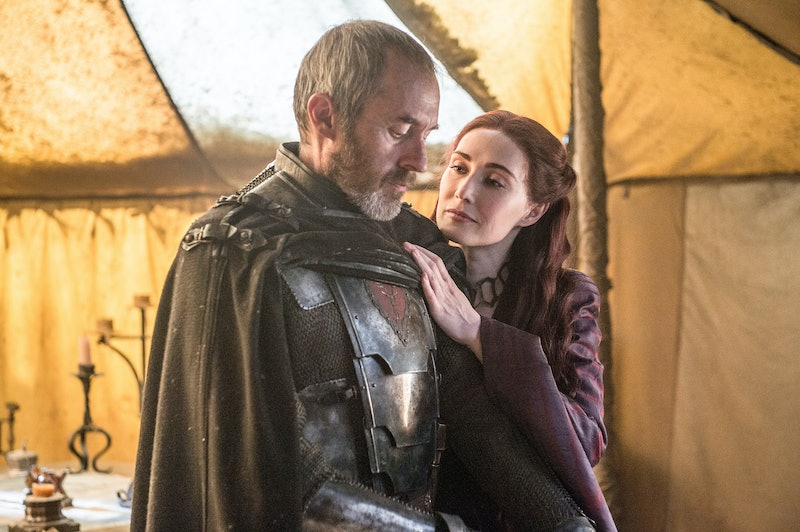 I am a huge fan of the hit HBO series Game of Thrones as well as the books upon which they are based, A Song Of Fire and Ice series. So, with the recent Season 5 finale that ended with Stannis potentially being murdered, Jon Snow potentially being dead (though there's no way Jon Snow is gone for good), and many of our other beloved characters in terrible positions, it's hard not to be impatient about what's to come next. So, what's a fan to do? Resort to coming up with our own possibly-crazy Game of Thrones theories, of course. Many of the Game Of Thrones conspiracy theories in the world make a lot of sense, I'm definitely on board with the R+L=J theory that's for sure. But, some are just a bit over-the-top like these Game Of Thrones Tumblr theories.

Now, having some insane ideas doesn't mean they're not going to happen. This is Game of Thrones after all, the most insane things have happened on both the show and in the books. And, I'm not going to lie that out of the six shared below, I don't totally disagree with the possibility of some. But, there's a point to the madness, even on GoT, and sometimes us fans get a little overzealous. Still, let's be honest, sometimes the overzealous theories are the most entertaining to read.

I actually love the first part of this theory, mostly because I have a deep fascination with Greek mythology. This fan posits that Stannis and the Greek King Agamemnon are actually following the same storyline. Agamemnon was cursed by the goddess Artemis for killing a beloved stag, and, as a punishment, she kept his ships stuck in harbor rather than being able to sail off for Troy into battle. The only way he could be forgiven in her eyes was to sacrifice his daughter by burning her. Definitely sounds like Stannis don't you think? But, here's where things get a little intense:

The fan then explains that Agamemnon received ultimate punishment in the end when his wife murders him in a rage. Stannis is confirmed to have died in the Season 5 finale, but apparently that's not enough of a punishment. What if, the fan suggests, that burning Shireen has other consequences? The exact theory is this: "What if the dormant greyscale can be transmitted through contact with her ashes, which everyone in the surrounding area may have breathed?" Basically, what if Stannis and Melisandre have released a greyscale epidemic in Westeros? Oh man...

It's a short but sweet theory that suggests that the High Sparrow ultimately wants to disband the monarchy in the seven kingdoms to set up a unitary theocratic republic. This fan believes that the High Sparrow is trying to build up a faith militant to do this. Now, there could also be some truth to this theory. We've seen how quickly the High Sparrow was able to reduce the nobility to shameful, terrible people in the eyes of all in King's Landing. It's very be possible that Sparrow wants to kick some people out of power... maybe to take it for himself?

3. Why Only Babies Are Turned Into White Walkers

Septa Lemore has yet to make an appearance in the TV series, but this fan suggests that the character who is described as the "spiritual tutor" of the character Young Griff is actually Oberyn's thought-to-be-dead sister? For this theory to make any sense to non-book readers, a little explanation is necessary. Young Griff is supposedly Aegon Targaryen in the book series, the very son of Elia Martell who was also killed at the same time as Elia by The Mountain. So, this fan is suggesting that Septa Lemore is really Elia Martell, and her son is also alive, which must mean they escaped their fate and have been hiding out ever since.

Now, we haven't seen either of these characters on the series, in fact Tyrion was supposed to meet Young Griff but the show took a different turn for his character. Perhaps this theory may never be visited on Game of Thrones. Still, it's a pretty fun one to explore.

I love this fan theory so much, and to be honest, I hope it comes true. This Tumblr post suggests that Game of Thrones and the Harry Potter series share a huge plotline. Perhaps when Jon Snow was killed by his fellow Night's Watchmen, he was taken to the afterlife and reunited with his father Ned Stark who told him of his true parentage, just as he promised he would when they met once again. Then he comes back and accepts his fate of R+L=J. Basically, Jon Snow pulls a Harry Potter when he was killed by Voldemort and saw Dumbledore in the afterlife. only to return to reality.

And, finally we come to Melisandre. This theory is a bit dark. The fan on Tumblr suggests that when Melisandre stated that her powers were stronger at the Wall, there's an interesting potential reason behind this idea. The fan suggests that maybe Melisandre is not a servant of R'Hllor, but of the evil god, The Other. Then it would make sense that her powers worked better closer to the White Walkers who are the "minions" of the The Other. The fan continues this theory with the help of the Bible:

She is often called ‘the Red Woman’. Another word for red is scarlet. A scarlet woman is a liar, a deceiver, a whore.

She would be like the Bible’s "Whore of Babylon." A fake priest sent to lure people away from the true god with false prophecy.

The fan explains that Melisandre has been purposefully lying about Stannis being Azor Ahai. She is "leading people away from their true saviour with lies about Stannis being the prophecised champion of R'Hlorr." The fan also states that this is why we don't ever see Melisandre doing the same kind of magic that true Red Priests perform. There's a lot more to this theory but the Biblical roots are definitely the most interesting. It's a totally insane idea, but I don't know. I kind of love it. Then again, I really do love them all. Keep on theorizing, Tumblr!