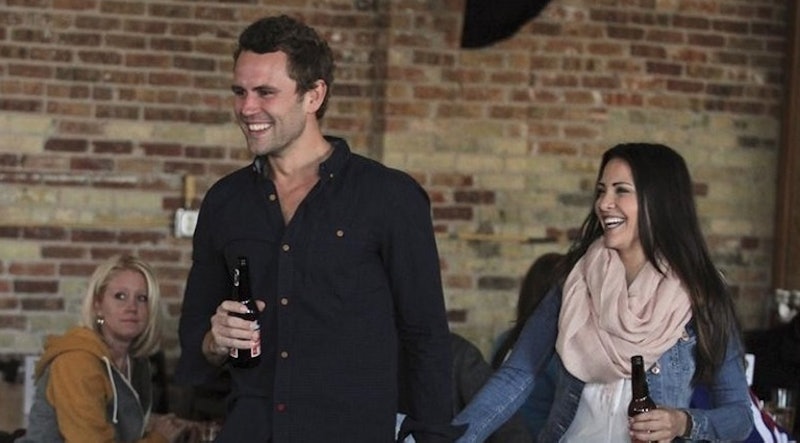 Poor, poor Nick. He’s had a tough go of it on The Bachelorette. First, he got his heart smashed by Andi, and then, electing to go back on the show, Nick just got dumped by Kaitlyn. Sigh. The first time around, Nick was arrogant about his chances with Andi — he just thought they would ride into the sunset together — and he really was completely floored when she dumped him. This time around, though still hesitant, Nick was still fairly certain that Kaitlyn would pick him. Well, that didn’t work out so much. Did Nick learn anything from Bachelorette Breakup Number 1 versus Bachelorette Breakup Number 2? Let’s take a look and find out.

On both Andi’s and Kaitlyn’s season, Nick was a clear frontrunner. Even though he only came on the show in like the fourth week of the season, it was so obvious that Kaitlyn was into him. The other guys hated Nick on both season, but Nick’s hubris tripped him up with Andi. They were hot and heavy to the final two (just like this time) until the morning of the day when proposals were supposed to happen. Andi wasted no time in cutting to the chase, telling Nick:

“I woke up this morning and didn’t feel like something was right. I can’t go through with something that I don’t think is right. The feeling is not right. It’s not what I envisioned. It’s not right, today isn’t right. Knowing that intensity between us, I felt that worry about there being so much intensity and overanalyzing. A life with you would be me over analyzing every single moment.”

Obviously, Nick was shocked, and he quickly asked if it was him or someone else, and Andi said she didn’t know. I’m not surprised there — it’s not an easy decision to make, narrowing down your final suitor on The Bachelorette. Nick sobbed in the car on the way to the airport, and that was that. Ugh, poor Nick.

So what happened with Kaitlyn? Kind of the same thing. Kaitlyn didn’t do Nick the justice of stopping him before the actual proposal, which I think was kind of crappy, but she said a lot of the same things — that their relationship was intense and that they had agreed that if one of them felt it wasn’t right, then they wouldn’t go through with it. Then Kaitlyn did that thing that a dumpee does to try and make the dumper feel badly for him or her, and Nick wasn’t having that. He left pretty quickly, saying that he didn’t need to know how hard the decision was and saying that he felt misled and destroyed, etc. Nick didn’t sob on the way to the airport this time — he was in shock, and he threw his Claddaugh ring to the ground (he and Kaitlyn bought the ring together in Ireland).

The only difference between the breakups was Nick’s reactions — he was so sad during Andi’s breakup, but his breakup with Kaitlyn was more raw. More angry. More defeated. He had been through it before, and he couldn’t believe that he had to go through it again.

You have to really feel for the guy, you know? I just hope he finds the love he’s looking for.