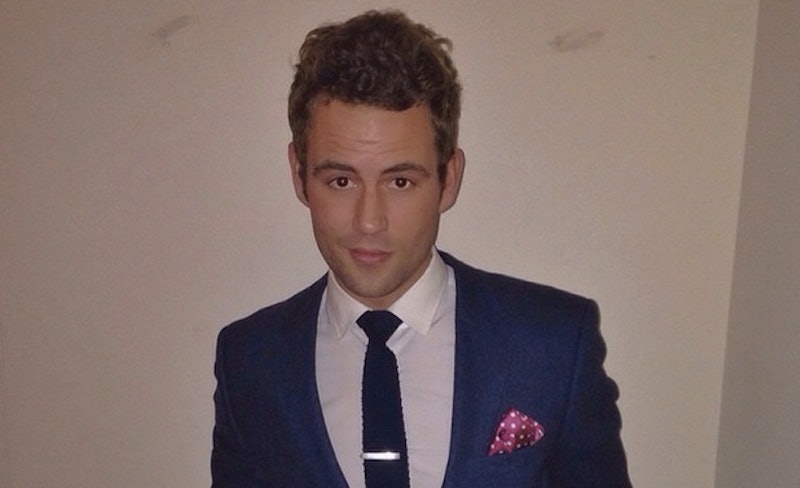 Fans of The Bachelor/ette surely remember last season's finale in which Bachelorette Andi Dorfman shockingly chose Josh Murray over apparent front-runner Nick Viall. Well, about eight months have passed since then, and things have changed quite drastically. On Thursday, Andi and Josh confirmed that they'd broken up — only days after appearing happy and engaged on The Bachelor's live premiere. As fans of the show, we just had to know what Nick Viall thought of Andi and Josh's split, and, thankfully, he was willing to share his thoughts with Bustle.

Nick says he found out about Andi and Josh's split the same way many fans did — through social media. "My Twitter feed started blowing up with people referencing the break and then I started receiving multiple texts from people," he tells Bustle. As for whether he found the breakup to be a surprise, he says, "You know, I didn't think too much of it, but I suppose like most people, I was a little surprised to hear that. Especially given how they were seen together during the premiere."

If you watched The Bachelor's live red carpet premiere, you know that Andi and Josh seemed totally excited to be there with one another. At the time, Josh told host Chris Harrison that they were "looking forward to just settling down and relaxing and just having fun with each other," but the couple didn't expand on any wedding plans which may have raised suspicions for some viewers. Nick, who watched the premiere himself, didn't get any odd vibes from the couple. He says, "I really wasn't trying to assess their relationship when I saw them, but certainly nothing stood out to me."

Nick was noticeably absent from the red carpet event on Monday, so obviously, we needed to know why. Heck, they had Nikki Ferrell talk forever , so couldn't Nick get some screen time, too? As Nick tells us, he wasn't at the premiere simply because he and the show "couldn't make it work." He does say, though, that he could turn up at other Bachelor events: "You never know. I certainly keep in touch with the show and am still close with many of the producers. Just really depends on timing."

The former Bachelorette star adds that he is not in touch with Andi: "I have not spoken with her since the finale. I really have no idea if I ever will. I certainly don't expect either of us to reach out to one another, but I would imagine at some point our paths may cross." So does that mean there's no chance of rekindling their romantic relationship? Yeah, pretty much. Nick explains, "I have moved on from my relationship with Andi, so there is certainly no interest from a romantic standpoint. If at some point we could be friends, I would certainly think that would be great, but again I don't expect either of us to reach out."

Enough about Andi and Josh though, what's Nick up to in his own life? Well, he's watching the new season of The Bachelor, for one. He says he sent Chris Soules a quick text wishing him luck on the show and is sure he will do a great job. He also let us in on a fun tidbit about Chris — he falls asleep freakishly fast. "The man can fall asleep in a car faster than anyone I've seen. It's amazing. One second you think you're having a conversation the next he's fast asleep. We had some fun with him while we were filming when it would happened." Nick's also been doing some dating — camera-free! "I have been dating which has been a lot of fun overall. I haven't been lucky enough to find 'the one' yet, but I am sure it will happen when it's meant to be." Spoken like a true Bachelorette alum.

Previously, Nick Viall also shared his breakup tips with Bustle which you can check out here!