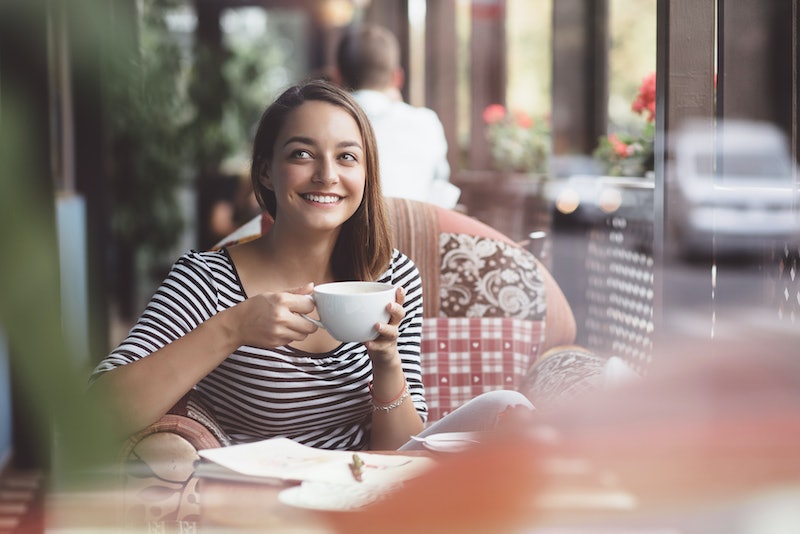 As much as we'd all like to pretend that our exes cease to exist after we've broken up with them, the harsh reality is that they are still very much living their day-to-day lives, even after they've stopped being a part of ours. And figuring out what to do when you run into an ex? Not so easy. Cutting off communication after a breakup is necessary to the healing process for both parties involved, but unfortunately you can't always control whether or not (or when) you see each other face to face again. A 2010 study in the Journal of Neurophysiology found activity in the part of the brain that registered physical pain when participants were shown pictures of their exes. This means that having to see someone you used to love, and who rejected you, can actually make you physically hurt, which is why having to see each other in person can be so, so tough. You can do your best to delay the run-in, but in most cases, it's pretty much inevitable.

There are, luckily, a few things you can do to make yourself look calm, cool, and collected when you do run into a former partner — even if you're freaking out underneath it all. Remember: You're not alone in feeling this way. Your ex is probably nervous as heck to see you, too.

After a breakup, it's easy to catch yourself imagining how it’s going to go the first time you run into each other. Will you hug? What will you say? Will they tell you how amazing you look and how much they regret breaking up? Decide beforehand how to survive your run-in with the ex, and stick to that plan to avoid being totally overwhelmed and caught off-guard.

The best way to plan ahead is to ask yourself, "What would make me feel good about myself?" says Lisa Brateman, a Psychotherapist and Relationship Specialist in a phone interview. If you start babbling incessantly, you're probably not going to feel good about it. But if you prepare yourself to be polite and ask more general questions, you'll walk away with your dignity in tact.

At the end of the day,"It's a matter of getting through it with integrity — not for the other person, but for yourself," says Brateman.

2. Keep It Short And Sweet

Even if there’s a lot left you want to say to an ex, a casual run-in is not the time or place. Say hello, drop a line about how awesome you’re doing, and try to end the conversation on a good note. Odds are you've already decided whether or not you and your ex should be together again, and if your answer was a definitive "no," pretend you have somewhere else to be.

Says Brateman, "The main thing is you don't want to oversell yourself, or to try to show that you care so much." Chances are, it's probably an exaggeration. Instead, take control of the conversation by keeping it less personal, and walk away before things get too unbearably awkward.

If your breakup was more or less mutual, and you know that you’re bound to run into your ex socially (for example, if you’re in the same group of friends or frequent the same spots), it may be wise to meet your ex for coffee before you're inevitably forced into a situation where you have to be together. It's up to you to decide if you and your ex are ready to be just friends, but it's important to take control here. This gives you the opportunity to plan ahead and diffuse some of the stress associated with the situation. This is especially important when you are involved professionally as well as personally, as you want to maintain appropriate boundaries after a breakup.

Brateman cautions against conversations like these if the feelings are still raw, and suggests going into them with a clear view of what you'd like to accomplish, so that "you're not dredging up who did what to whom, but instead you're saying 'how do we go forward in a way that we're both comfortable.'"

If you run into an ex at a bar or a party, think twice before that extra shot. You may want to hit the martinis hard to make yourself feel better or less awkward — and hey, maybe drinking to get over it works for you — but being drunk around an ex is often a recipe for disaster. It’s bound to make you more emotional, and will lower your inhibitions, which can increase the risk of you doing something you may regret, like professing your lingering love for them or trying to hook up. And if you're anything like me: Stay far, far away from the tequila.

Spending time with friends is key to getting over an ex, so it's important they're there in case of a meeting. Let them know ahead of time how you want to handle things, and make sure they know that you don't want them to be outwardly rude to your ex (no matter how much, and however rightfully, they may hate him).

Give them a time limit after which you want them to bail you out of the conversation with something along the lines of, “I need your help over at the bar.” That said, Brateman warns about relying on your friends too heavily as a shield, because ultimately, "it makes you look cowardly."

It's tempting to try to make your ex jealous or to publicly flirt with someone else, but you need to keep in mind that breakups are hard on everyone involved, and your ex is probably having their own emotional response to seeing you.

Run-ins tend to be most difficult for the person who was dumped, says Brateman, because it brings up old feelings of "I'm not good enough" and "They didn't want me." However, these situations tend to be most awkward for the person who did the dumping, because they are saddled with feelings of guilt that they didn't do everything they could to make the relationship work. Obviously, making out with or going home with with someone else in front of your ex is rude, and out of respect for the relationship you guys once shared, at least take the time to think about how you may be hurting your ex.

Seeing your ex, especially for the first time after a breakup, is bound to bring up old feelings. Going from laughing/crying/cuddling with someone on a regular basis to an awkward “Hey, how have you been?” conversation can be absolutely brutal, and you will inevitably want to text them afterward. Do. Not. Do it. Let yourself have the last word during the in-person conversation, and then leave it. Constant texting in a relationship is often a bad sign anyway, so when it comes to an ex-relationship, it will definitely make things worse. To lessen the desire for the followup text, take control of the situation from the beginning so that whatever happens, it's in your hands.

"Take control of the situation. You can dictate what is happening in the conversation ... It's about leading what's going to happen rather than just reacting to it," Brateman advises.

Unexpected encounters can really throw you for a loop, and will give you less time to map out how you'll handle things than, say, if you know you and your ex will be attending the same function. Having an initial run-in as you're leaving the gym all sweaty and gross, or even worse, when you're on a walk of shame, is not exactly what you pictured your normally-fabulous self looking like when you envisioned seeing your ex for the first time.

"Being taken by surprise can leave us looking insecure, simply because the meeting was unanticipated," says relationship expert and bestselling author Susan Winter in an email to Bustle. To account for this, imagine the absolute worst case scenario, and plan what can you say and do to appear unaffected and composed. Envisioning this will allow you to be less caught off guard if an unplanned run in does occur.

Nothing says "I'm over it" like pretending that you just don't care. Any sort of negative reaction to your ex, whether it be rudeness, anger, defensiveness, or coldness, makes you look like he or she still has some sort of emotional hold on you. Instead, "Grace, warmth, and poise are always in style. It may feel like an Oscar winning performance but you'll look good and feel good in the process," says Winter.

More like this
The Best Time To Date After A Breakup, According To Experts
By Bustle Editors
Are Virgo & Capricorn Compatible In A Relationship?
By Kristine Fellizar
Virgo & Sagittarius Zodiac Compatibility, According To Astrologers
By Kristine Fellizar
Hinge's New NFAQ Feature Is Demystifying Queer Dating
By Emma Carey
Get Even More From Bustle — Sign Up For The Newsletter