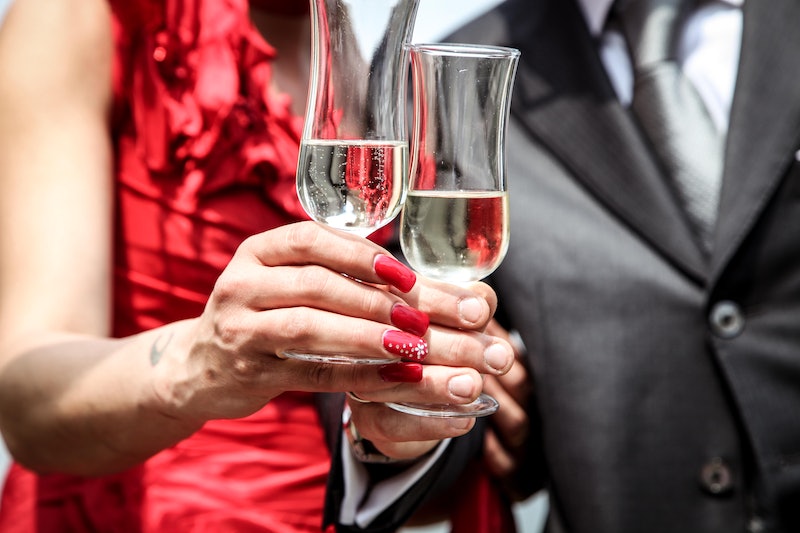 So, here's something interesting: According to new findings from a Gallup poll, people with a college degree and high income drink more alcohol. Specifically, if you make over $75,000, you are more likely to drink more than other Americans; additionally, your drink of choice happens to be wine. But let's use the results of this poll as a major reminder that correlation doesn't necessarily equal causation — because there's likely a lot more at work here than just whether or not you've got a college diploma under your belt.

The poll, which surveyed approximately 1,000 people over the age of 18 and was conducted via telephone interviews, found that 78 percent of Americans adults who had incomes over $75,000 drank alcohol; however, only 67 percent of the people in the $30,000 to $74,000 range and less than 50 percent of those who made less than $30,000 a year reported drinking alcohol. A similar pattern emerged when it came to education, with 80 percent of college graduates reporting themselves to be drinkers, but only 50 percent of people in the "high school or less" category saying the same. Interestingly, though wealthier people and people with college degrees seem to drink in higher percentages, people with lower incomes and those who haven't graduated college report that they drink more alcoholic beverages than they think they should. Gallup hypothesizes that this could have to do with the fact that "those with more formal education may be less willing to report a socially undesirable behavior in a public opinion survey."

So what exactly should we glean from this poll? Rich people drink more because they're educated, and educated people like wine? Not necessarily. First of all, it's important to keep in mind the golden rule: Correlation does not equal causation. Let's say a surveyor asks a participant three questions: "What's your level of education," "what's your income," and "do you drink alcohol." We have only three variables with these questions and, therefore, can only reach a limited number of conclusion about why people drink and who drinks. In fact, if you twist the wording and numbers around the study can make it seem like college is the reason people drink more. Imagine the headlines! "College Makes People Alcoholics" or "Why You Should Keep Your Kids Away From Education" — they're certainly sensationalist, but they're making a huge and unsupported jump based on some extremely limited data. There are a variety of reasons that might cause people to or prevent them from drinking, including religious preferences, health, family history, accessibility, and stress. To attribute just one or two factors of a person's life to how much they drink can be misguided.

That being said, if we pick this study apart for something more meaningful, it might suggest that high drinking rates among college graduates and/or people with higher incomes is less about having the degree itself; rather, it might be more about having the income to afford such luxuries, or the resources (namely, time and money) to drink socially. The correlation might be indicative of socioeconomic status, which makes the results speak to a much bigger issue.

So while it may be appealing to assume all people with high incomes and college degrees are big drinkers, it's important to always pick apart at the data and look for a deeper meaning. If there's one thing I learned in high school, whether it was math class or English class, it was to always question the information in front of me,.

More like this
6 Abortion Advocates To Follow On TikTok
By Sara Youngblood Gregory
The Best Underwear For Sensitive Skin, According To A Dermatologist
By Alexa Vazquez
I’m Obsessed With obé Fitness’ At-Home Workout Classes — & It’s WAY Cheaper Than A Gym Membership
By Amy Biggart
Tapping Mind/Body Power: Evia Brings Digital Hypnotherapy To Menopause
By Cassandra Seale
Get Even More From Bustle — Sign Up For The Newsletter