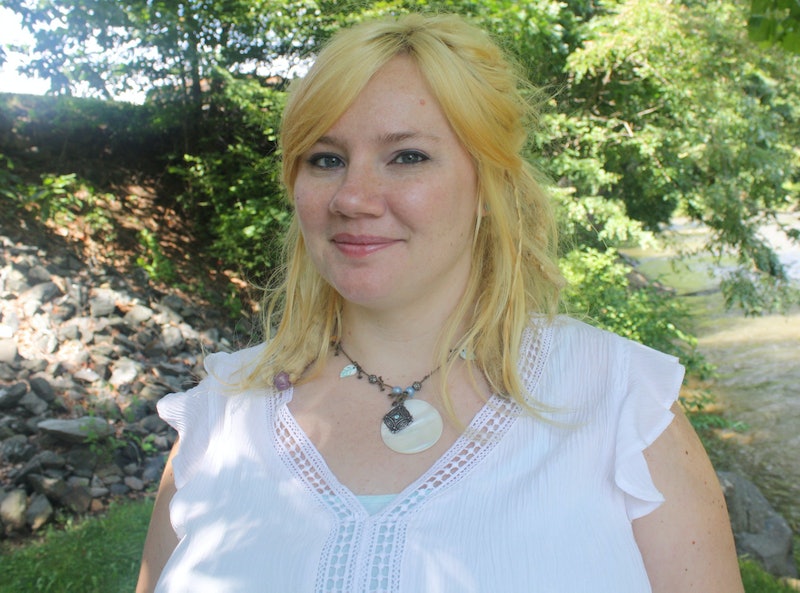 If you Google images of changes to your skin while you're pregnant, you're bound to have some mixed reactions. I was always under the impression that the condition of your skin during pregnancy could go one of two ways: Really horrible or actually quite nice.

Now that I've experienced seven months of being a soon-to-be mommy for the first time, I'm happy to be able to say that I've enjoyed the process of the pregnancy skin changes so far. Of course, this is my story, and no one pregnancy is exactly the same as someone else's. But I'm sure that there are women out there who can totally relate to parts of my own experience.

While some women have more difficult and frustrating skin issues while they are pregnant than others, my skin has generally stayed pretty cooperative. I've actually had some former issues disappear while being pregnant!

While I'm not totally convinced that I'd want to be pregnant all the time (unlike one of my friends who expressed to me that she really misses being pregnant while we were having a discussion about how my experience is going), I am hoping that this renewed love for my skin and the positive changes I've experienced continue after I've had my baby.

Here's why I — and hopefully you — can love our skin while pregnant.

As my pregnancy continues, I've definitely noticed an increase in my skin's lushness. Perhaps it's the prenatal vitamins I've been taking? All I know is that a couple of days after applying my favorite lotion, my skin seems to have absorbed it so well, it still feels fresh. Maybe it's nature's way of introducing me to the baby-soft skin of my growing daughter.

2. My Freckles Have Come Out More

It's a documented phenomenon that dark spots like freckles and moles become darker during pregnancy, and I was aware that my areolas would darken as well. But I didn't realize that I'd actually have more freckles pop up, too. I'm a natural strawberry blonde with fair skin, and I've lived with my little spots my whole life, so I've always known what they look like and where they are (careful to watch if they change too much as that can be a sign of skin cancer). So I was surprised and delighted when a new one popped up on my finger and my ankle. Call me crazy, but I've always loved those little unique marks that no one else has in exactly the same place as me.

Maybe you're asking yourself why in the world I would include stretch marks as a reason to love your skin while pregnant, but the way I see it, these marks are going to be an ever present reminder of what I went through to make a little human. I never want to have a disdain for something that my child brought to me just because it's not traditionally seen as attractive. They are battle scars, my friends, because there are some rough moments in pregnancy. But just like most battles where you come out on top, it's worth the fight. I'm embracing these so-called "flaws," because with the right perspective, they're absolutely beautiful.

Because of the increase in heart rate and blood flow during pregnancy, you tend to take on a blushed, sort of glowing look. I've also noticed that my facial skin seems to be more naturally brilliant, so I'm not using a ton of makeup. I liken it to the effect I get when I'm at the beach of a sun-kissed face. I'm also enjoying all the compliments on my skin that have been pouring in!

As I have light skin, the linea nigra (black line) doesn't seem to show up as much in this photo, but there is a line that goes from your naval to the center of your pelvic bone that appears when you're pregnant. Before you're pregnant, it's actually there even if you don't see it — it's called the linea alba (white line). To me, there's something magical about a line appearing on your stomach when you're pregnant. It reminds me I was made to do this.

6. My Chaffing Has Become Minimal

Before becoming pregnant, I already had big boobs and big arms. Because of this, I often experienced uncomfortable chaffing between my arm and boob in that side boob area. I've been especially delighted by the fact that my skin has seemed to not be as bothered by the constant rubbing from my arm, and I've seen a noticeable difference in the general condition of that part of my skin as it's more even-toned and healthy looking. My chub rub between my thighs has also been noticeably not as annoying even though I'm wearing mostly dresses these days. Thank you, pregnancy fairies! Can I keep this forever?

7. I Haven't Had The Boob Sweat Rash

Before I got pregnant, I had to use a cream for my under boob sweat problem. I would actually develop a rash that was basically a yeast infection (I know, kinda gross) from the restriction of my bra and, well, just having big boobs. But lo and behold, even though I still sweat the same amount as I did before, my rash has seemingly magically disappeared since being pregnant. I don't even have to use the cream anymore to keep it under control. Again, crossing my fingers this sticks around after I've given birth.

But even if my skin is only this way while I'm pregnant, it makes the experience that much more special. See, I told you — it's not all horror stories.