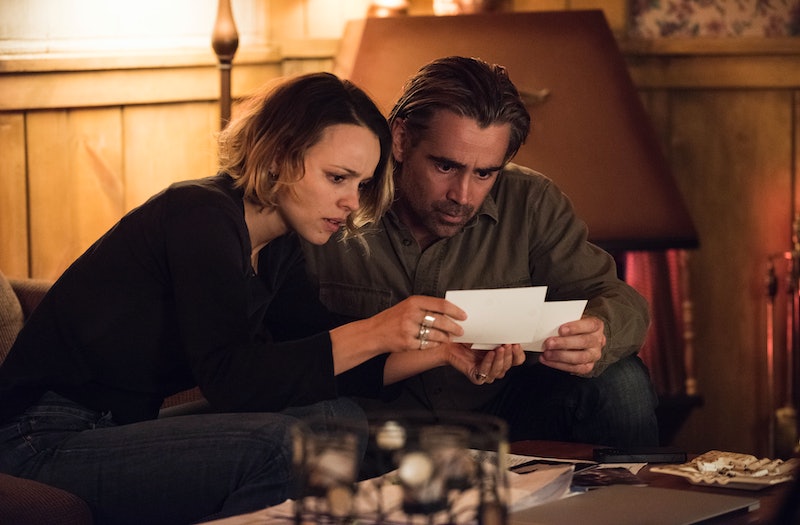 Unfortunately, True Detective theory-hunting isn't the sport it once was. Last season, everyone pored over every tiny detail in every episode looking for clues about who the Yellow King might be. And those efforts were mostly unrewarded when the finale aired. The background details turned out to be just that — background details. Because of that, and because people seem (wrongly) less into this season (the writing is still beautiful, you guys), the internet is less filled with theories about this season. But that doesn't mean they aren't there. There are plenty of crazy ideas still flying around about who killed Caspere. So, as this season starts to wind down, what are the best True Detective Season 2 Tumblr theories about the show?

Theories about the show have covered everything from Ani's father being connected to the Jonestown Massacre (Dr. Pitlor does seem like a Jim Jones type, but I think we see now that the "bad thing" that happened in 1978 was Ani's sexual assault) to Frank Semyon's assistant Blake being the father of Ray Velcoro's child (they both have red hair, but Blake's DNA doesn't match the rapist's). A lot of these theories have been disproven by what we know so far. But there are still plenty on Tumblr that look like they could still be in play. Warning: If you're not caught up with the series, there are SPOILERS throughout. (Go watch it—I swear this season is still really good!)

At this point, Tumblr is pointing the finger at everyone. User adventurecomics believes the killer is Jordan Semyon, Frank's wife, stating, "Frank obviously is exhausted from fighting and the stresses of his numerous losses, but she seemed very distant and yet ready to get Frank off of thinking about the troubles at hand." User gypsyprincess9, on the other hand, posted a link to a theory that says Frank is the killer — and might not know it! — as a way of self-sabotaging his plans to go legit. (The biggest clue? The way that Frank is weirded out by any stains that look like Caspere's eyes, from the water stain on his ceiling to a coffee stain on his tablecloth.) Uproxx's Tumblr makes a case for Lieutenant Kevin Burris, Mayor Chessani's underling who you've probably forgotten about by now. This one has the most evidence. According to Uproxx:

It was Burris who brought the disappearance of Ben Caspere to Ray’s attention and assigned him to the missing person’s case. He wanted Ray to investigate Caspere, maybe not to find the true killer, but to uncover what Caspere was hiding, the missing disk drive. After the murder, it was Burris who insisted that Ray and the Vinci PD be involved in the investigation, despite the fact that it wasn’t technically in Vinci’s jurisdiction.

That one is the most compelling, but, even with so little of the show left, it's clear that anyone could be the killer at this point. I'd try to work up some evidence saying the killer is Chad, but, really, it's anyone but him.

Remember Those Children From The Robbery?

Remember when Paul Woodrugh was investigating the origin of the mysterious blue diamonds and he found that they were heisted from a jewelry store in L.A. during the 1992 riots? The owners of the store were shot, but two kids — a boy and a girl — survived by hiding from the assailant. User sureshorty thinks the two children might play a bigger part in all of this:

I can’t help but feel that the woman with the scar on her face who tends bar is the girl. Ray either knows this about her because his father would have been a cop at the time OR is her brother. He could have been adopted after the incident. Together they’re taking everyone and taking everyone down in a blaze of glory. They’re both around the right age. They both look like the children in the picture.

I hope the bartender, Felicia, isn't Velcoro's brother, because of all the flirting she's done with him. But she could be the girl from the jewelry store and that might explain Velcoro's warmness towards her, since he is a sucker for the wounded underdog. And, after last season, it'd be kind of awesome if the killer turned out to be a woman. Get your revenge, Felicia.

User ex-libris-blog posted a few photos (like the couple I used above) with no commentary, but the implication is clear: Velcoro can't take it anymore. He wants out, and I mean out out, and he's going to find a way to get it — be it through alcohol, drugs, or pissing off the wrong person at the wrong time.

It's All About The Penis

User ithasnosoul has my favorite theory of all:

I feel like the theme is castration maybe, but different types or routes of castration. The most obvious is Caspere’s corpse which was found with the eyes removed and genitals cut off literally. The rest are figurative.

She cites Woodrugh's ED (though that's explained in a differrent way), Frank's inability to have children, and Velcoro's son that might not be his. And Ani Bezzerides? She's “'castrated' by not having a penis in the first place," the user writes. Could this whole season boil down to a case of penis envy?

At this point in Season 1, we were already on a very clear path leading up to the finale — with Season 2, however, it's any theory's game. So, will Pizzolatto really pull it out of the bag in the final episodes of this season? I hope so.