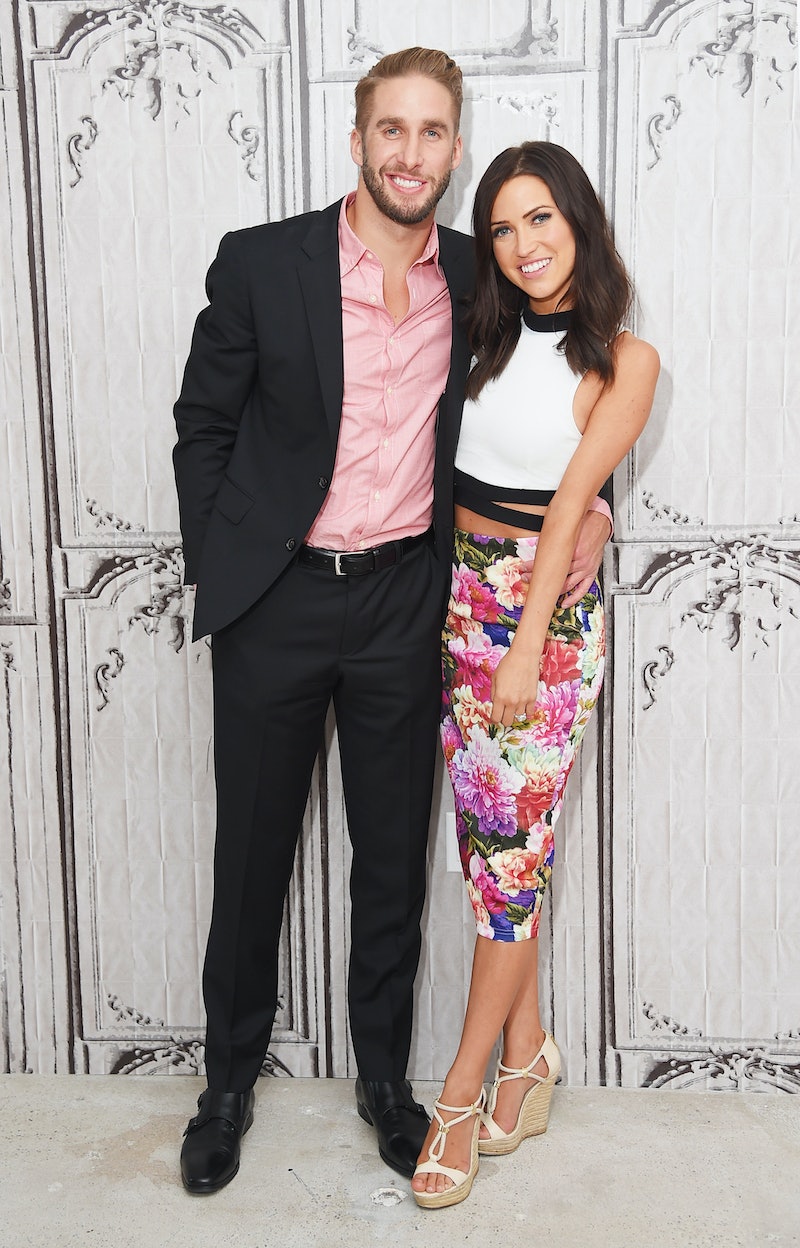 Attention reality television fans: Our favorite newly engaged couple just keeps getting cuter. After a season worthy of marathoning episodes, it was revealed on the season finale of Kaitlyn Bristowe's The Bachelorette that Kaitlyn had chosen personal trainer Shawn Booth over Nick Viall. Although my heart is still experiencing second-hand angst on Nick's behalf (stay strong, hon!), it has become undeniably clear that Kaitlyn and Shawn always belonged together. Since the finale, the two have continually bestowed upon fans their unequivocal adorableness through guest appearances, reports, and their mutual love for social media. Aside from the clasped hands, giggles, and banter that have made the two garner a top spot on my list of #RelationshipGoals, Kaitlyn and Shawn have also offered some Bachelorette revelations since stepping out publicly as a couple.

Recently, the two cleared up any speculation about the Snapchat spoiler pic (yes — that one) that was leaked online before the finale (whoops), and the two have now shared some sneaky behavior they took part in during filming. In an interview with People, Kaitlyn and Shawn revealed that they took a page from '90s high school homerooms everywhere by passing notes back and forth while filming. "Nobody knows this, but we passed notes on the show all the time," Kaitlyn said. "It was so fun to pass notes about the little things like this is my favorite Ninja turtle or this is my favorite movie, because on camera, it's always the bigger picture. And we saved every little thing from our dates. I didn't save anything from the other dates, not one thing!"

"We had to be secretive," added Shawn. "My notes would be like, 'This is crazy, I miss you,' or fun facts about me." Is that not the cutest thing you have ever read? All this squee-worthy romance is almost making me reconsider shutting down my OkCupid account — gah!

I'll admit that I was initially Team Nick when first watching the season. Upon further inspection, however, it has become clear to me that Shawn was the rightful winner from the start. In celebration of love and the beautiful escapism of reality television, let's take a look at Bachelorette moments that proved Shawn was always the obvious choice.

1. When He Willingly Wore This LOUD Golf Outfit

Anyone who is willing to rock that uncomfortably tight golf outfit is in it for the long haul.

2. When He First Told Kaitlyn She Was The Bachelorette He Came For

Shawn knew even before meeting Kaitlyn that she was someone he could picture a future with — which is only creepy when it's not adorably romantic. He avoided coming off sketch due to his obvious chemistry with Kaitlyn. I guess when you know, you just know.

3. When He Gave Kaitlyn His Favorite Shirt

Shawn's offering of the one prized possession he had — coupled with Kaitlyn's reaction — showed that these two were already head over heels for each other.

4. When He Let His Guard Down

Revealing your vulnerability to someone can be downright terrifying — especially when you're falling in love. Shawn proved himself to be a front contender when he revealed his sensitive side in one of the most heartwarming moments of the season.

5. When He Decided To Stay

Shawn had arguably the most gut-wrenching experience during Bachelorette. He fell for Kaitlyn fast, and seeing her with other men — along with learning that she had hooked up with one of them — looked positively agonizing. Despite his anguish, he decided to stick it out for love. It definitely paid off.

6. When Kaitlyn Revealed She Had Slept With Nick

Kaitlyn didn't do anything wrong by sleeping with Nick and definitely didn't need to chastise herself to the extent she did following the hookup. However, the fact that she regretted the decision so much and vented about it to Shawn truly proved that he was the person in her heart.

7. The Proposal Speech, Because Duh

After weeks of anticipation, Kaitlyn chose Shawn as the winner, and he responded with what may be the most romantic proposal speech in television history. I wouldn't expect any less from a guy who looks exactly like The Notebook star, Ryan Gosling.

There you have it: Shawn was the obvious choice all along. Fortunately, Kaitlyn still allowed herself the opportunity to explore her options before the season finale. If she had chosen Shawn from the get-go, viewers wouldn't have had one of the most epic collection of episodes in Bachelorette history.