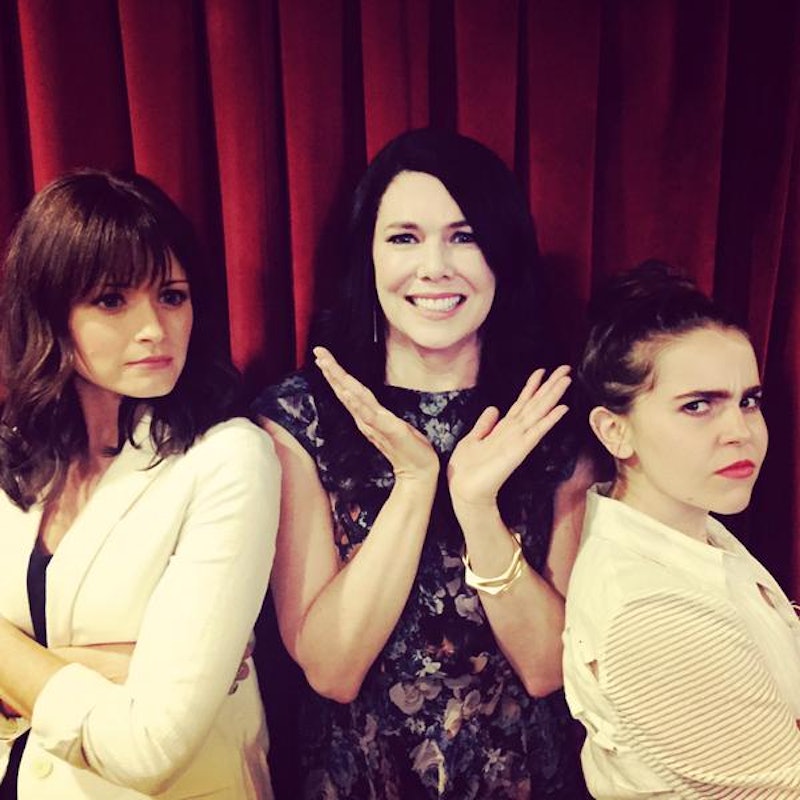 Parenthood and Gilmore Girls fans, it's finally happened. The most epic reunion, meeting, and picture that we've all been waiting for is here — and it's glorious. On Monday, Mae Whitman shared a photo with Alexis Bledel and Lauren Graham from the 2015 ATX Television Festival (where there was also an epic Gilmore Girls reunion). As all of us Gilmore and Braverman fans know, both Bledel and Whitman have played Graham's fictional daughters on the small screen. Bledel will forever be known as Rory Gilmore, aka Lorelai Gilmore's mini-me, while Whitman will always be recognized as Amber Holt, aka Sarah Braverman's once wild child.

Ever since Whitman was cast as Graham's daughter in Parenthood, fans of both the NBC series and Gilmore Girls have asked themselves the very same question: "Who makes the better daughter?" Think about it: are you more "Team Rory" or "Team Amber?" Even Whitman phrased the question along with the photo. She wrote, "AT LONG LAST WE MEET #drawyourswords #breaktheinternet."

So, who would you draw your sword for? It seems impossible to pick a favorite, right? Both actresses played such remarkable and influential characters, so why do we have to choose? I have a feeling Graham would also have a hard time choosing sides. Her facial expression in the photo pretty much says it all. Well, I'm not going to select a team. Not only is too damn hard, but I feel like focusing on the positive.

So, with that said, here's a list on why Rory and Amber would make great sisters, because why can't Graham be mom to both?

Unlike Rory, Amber is "free as a bird" and does whatever feels right in the moment. So, Rory, who is all about organization, timelines, and lists, could put a bit more structure and focus into Amber's life, which isn't always a bad thing, especially when you're a wife and a mom.

2. Amber Would Teach Rory How To Loosen Up

Again, organization and schedules are good, but sometimes you just have to have fun. Enter Amber, who would bring fun and maybe even some chaos to Rory's life. Hey, letting loose and going with the flow is definitely something sisters need to do together every now and again.

3. Their Wardrobes Would Be Off The Charts

Can you imagine all of the clothes, shoes, and accessories these two could share? Granted, they have very different styles, but who cares? When you have access to another closet filled with amazing garments, why wouldn't you borrow all that you could?

4. They Could Talk Boys & Relationships

Sisters are perfect for talking about boys and relationships. Whether Rory would be dealing with Jess, Dean, Logan, or a new suitor, there's no doubt Amber would offer all kinds of wisdom. As for Amber, who also had some rocky relationships, Rory would be there to lend guidance in her marriage, if needed.

5. Their Friday Nights Would Be Filled With TV, Movies, & Music

What better way to spend a Friday night than with your sister watching old movies, talking about TV shows, and listening to music? Both Rory and Amber had great taste in all things entertainment, so just add that to their long list of similarities.

6. Rory Would Make a Great Babysitter

Whenever Amber needed a night off or wanted to go on a date with her husband ( Friday Night Lights ' Jason Street), Rory could step in and babysit for the two. That's what sisters are for, right?

7. They Would Be An Empowering & Dynamic Duo

Rory and Amber are both strong, influential, inspiring, and independent women. Not only would they empower others, but they'd make one dynamic duo, especially in the world of TV. We need more duos in the world like Rory and Amber.

Let's face it, when your mom is Lauren Graham (or a character played by the amazing actress), you're going to end up best friends, because that's how she would want it.

Now, all we need is an actual TV series or movie with these three women. Whether Graham plays mom to both Bledel and Whitman or not, I don't care. All I need is this trio starring side by side — and stat.